Common Security through disarmament: Meeting of the SI Committee on Disarmament in Berlin, 21 April 2009 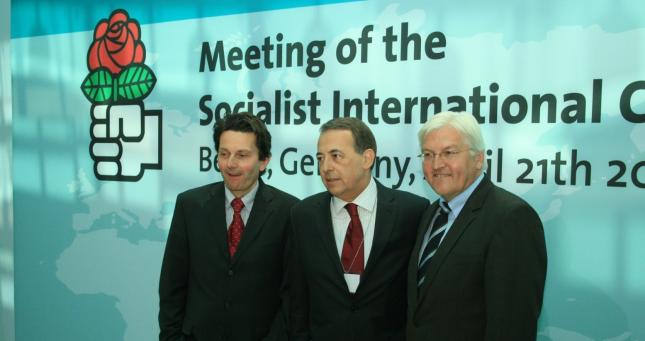 The first meeting of the SI Committee on Disarmament took place in Berlin on 21 April 2009 hosted by the Social Democratic Party of Germany, titled ‘Common Security through Disarmament’, with the participation of the German Foreign Minister and SPD candidate for Chancellor Frank-Walter Steinmeier and SPD Chairman Franz Müntefering. It was chaired by Rolf Mützenich, MdB of the SPD, who was elected to head this Committee at the last SI Council meeting held in Vallarta, Mexico.

Close to 50 participants, including representatives of political parties, experts and specially invited guests, gathered at the Willy-Brandt-Haus, to discuss an agenda which included the key issues of the current debate on disarmament and arms control.
The symbolism of convening in Berlin, a city that triumphed over the divisions caused by the Cold War, was not lost on the participants. In opening the meeting, the SI Secretary General Luis Ayala warmly evoked the legacy of Willy Brandt and his enduring contribution to peace and security, a man whose vision and example, he said, was once again being taken up with vigour by our International in rising to meet the new challenges and opportunities which we faced today. We were living in different times now, Ayala said, nuclear weapons were left over from a previous era, from a time characterised by the Cold War, confrontation and authoritarianism. And just as the Socialist International had then been in the vanguard of the movement for democracy, freedom and peace, today it stood ready to contribute to the new architecture needed for arms control and a world free of nuclear weapons, based on sound structures geared to dialogue and cooperation between nations.
Frank-Walter Steinmeier underlined that the system of nuclear deterrence was obsolete and also a risk to world peace if not changed. The thought patterns of the Cold War had to be done away with and a new mindset adopted. Trust had to be fostered as a new resource for armaments policy. Arms control was in a state of paralysis, he added, and he looked to 2010 with hope for a new treaty. He pointed to the optimism that had been generated following the new emphasis placed on arms control by the US President coupled with the positive signals which had come from the Russian President. ‘Global Zero’ must be our objective, he said, and insisted that in this, the Russians and the Americans could not be expected to unilaterally shoulder the burden, others, Europe included, had to play their part too. Drawing on the lessons of the past, he concluded, it was clear to us that the security of one nation could not be achieved through the insecurity of another. From its very inception the democratic left movement had worked for disarmament and peace, but with internal peace at the heart of our societies. And this, he said, was what set us apart.  (Speech)
Emphasising the role of the world socialist movement, and its leading figures throughout our history, such as Willy Brandt, who with his ideals set history in motion, Franz Müntefering underlined the innate belief in people to be able to make progress and to find solutions. It had been proven in the past, he said, and was true today. The new context we lived in at present compelled us to approach each other and to come up with common initiatives. Our movement was uniquely placed to do this. The types of conflicts we faced today were different from those of the past and the policy of détente had to be addressed very differently too. There were many problems in existence which no nation could deal with alone, he said, as there were new inherent dangers. Neither the German Social Democrats nor the SI had ever been pacifist organisations, he added, they had always known that where violence existed it needed to be stopped. A pre-requisite for successful disarmament was to ensure that democratic decisions and rules were in place, not imposed, but complied with, he concluded, and there could be no prosperity without peace.
Contributions to the discussions covered wide ranging aspects of the disarmament agenda, and in his summing up, the Committee Chair Rolf Mützenich noted consensus on the key questions and the will by all those present to undertake a common programme of action.
The Committee agreed a 10-point plan which called for a strengthening of the Non-Proliferation Treaty, a zero solution to tactical and strategic nuclear weapons, a strengthening of multilateral controls through better verification and the multilateralisation of the nuclear fuel cycle, a new arms control agreement on missile defence, an effective control of carrier technologies, a strengthening of the chemical weapons ban through disarmament and driving forward the Biological Weapons Convention, conventional arms control and overcoming the crisis in the CFE treaty, protecting the civil population by banning especially pernicious weapons and establishing controls of small arms and light weapons, getting regional initiatives for disarmament and security underway, and overcoming the blockade at the Geneva Disarmament Conference.