Committee for the CIS, the Caucasus and the Black Sea meets at United Nations in Geneva 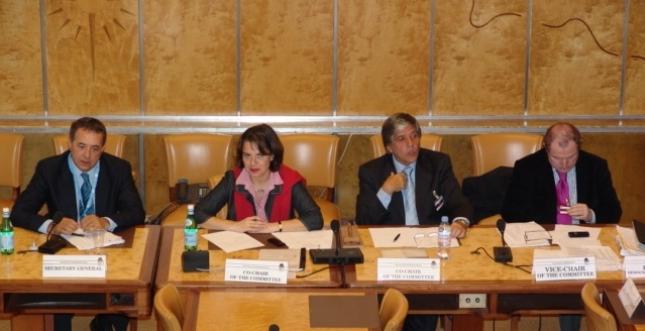 The Socialist International Committee for the CIS, the Caucasus and the Black Sea held its first meeting on 16-17 April, following its establishment at the last SI Council meeting in Vallarta, Mexico, last November. Chaired by the two Committee Co-Chairs, Alexandra Dobolyi (MSzP, Hungary) and Mario Nalpatian (ARF, Armenia), and with the participation of the Secretary General of the International, Luis Ayala, the Vice-Chair of the Committee, Tadeusz Iwinski (SLD, Poland), and SI Vice-President Maria Titizian (ARF, Armenia) along with numerous representatives from the region and other parts of Europe (List of Participants), the Committee exchanged views on the development of democracy in the region; the contribution of the International to the peaceful resolution of existing regional conflicts; strategies for strengthening and promoting social democracy in those countries, and agreed on a number of initiatives and other activities of the Committee for the coming period.


In regard to the advancement of democracy in the region, the Committee unanimously agreed to express its grave concern at the total lack of progress in Belarus and the persistent violations of human, civil and political rights which the people of that country continue to suffer. It expressed its support for and full solidarity with the Belarussian democratic forces as a whole, which today live under what participants at the meeting called “the last dictatorship in Europe”. In particular, the Committee underlined the importance of continuing to work together with the forces of the democratic left in that country, most of which were represented at this meeting, in order to secure a progressive and democratic option for the future, through the cooperation and joint efforts of all these forces. The visit of an SI delegation to Minsk in the forthcoming months was agreed, with the aim of strengthening and deepening contact with the people and the national situation.
Concerning the recent elections in Moldova, the Committee deplored the evident deficits in the electoral process which have led to a serious lack of credibility in the results. The Committee called on the Moldovan authorities to respect the people’s democratic rights and commitments, ensuring that a) all the resources, procedures and legal mechanisms agreed or presented by the political parties, citizens and civil society organisations to verify the validity of the results are thoroughly carried out and respected, and b) in the absence of convincing legal remedies and transparent answers to the doubts and complaints presented, it will be preferable, within a reasonable period of time, to have a broad national accord for the holding of new elections with a new electoral register and within a framework agreed between the government, the opposition and civil society in order to guarantee new free and fair elections.
In relation to the situation in the Caucasus, the Committee declared its readiness to work for an easing of tensions, the resolution of conflicts, and the strengthening of democracy and its institutions in the countries of the region. The Committee agreed, first of all, to act in favour of a negotiated solution to the Nagorno-Karabakh conflict and toward dialogue and negotiation between Armenia and Azerbaijan which would allow a new dynamic for peace and for overcoming the conflict between those two countries. To that end, it agreed to launch its own initiative, starting with the two SI member parties in those countries. Secondly, the Committee agreed to support and promote an open and unconditional rapprochement between Turkey and Armenia which would permit, in a just and mutually satisfactory manner, the initiation of a new era in the relations between the two peoples. Thirdly, it agreed to send an SI Mission to Georgia to establish dialogue with like-minded political forces with a view to consolidating the centre-left in that country and to promoting initiatives which would, within the framework of international law and a respect for the human, political and civil rights of the people, overcome recent tensions. At the same time the Committee agreed to promote a commitment by the international community to advance  fair and negotiated solutions and to reduce the atmosphere of discord which exists between the people of the region.
It was further agreed by the Committee, to extend its fullest solidarity with and support for the political forces in Russia, Ukraine, Kazakhstan, Kyrgystan, and others in that vast region of the CIS, Caucasus and the Black Sea, who maintain and promote our shared social democratic principles and values, recognising that their contribution to the political life of their countries has been vital to their being more democratic, more free and with greater opportunities for all its citizens.