From a time of crisis to a new era of inclusive partnership: SI Africa Committee meets in Dakar 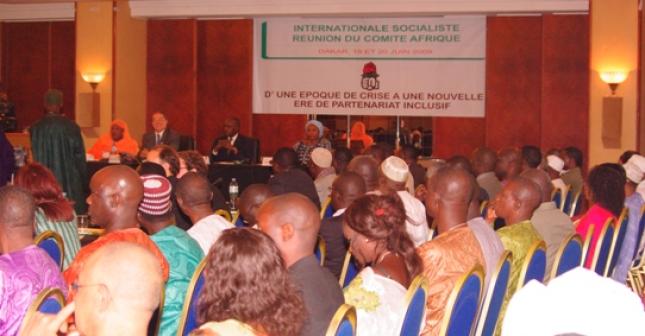 In advance of the Council meeting in Montenegro, the Socialist International Africa Committee met in Dakar, bringing together representatives from member parties across the African continent and from European member parties (List of Participants) under the main theme of: “From a time of crisis to a new era of inclusive partnership”. The meeting was hosted by the Socialist Party of Senegal and chaired by Ousmane Tanor Dieng, Secretary General of the party and the Chair of the Committee.

Addressing the current financial crisis, the meeting recognised that the Socialist International had already foreseen the future consequences of a globalisation too focused on an ultra-liberal model as early on as the SI Congress in 1995. Now that the world has suffered an unprecedented financial crisis, it was noted that those who defend liberalism are today actively promoting the measures that the SI were proposing 20 years ago.

Luis Ayala, Secretary General of SI expressed his pleasure at being received once again by the Senegalese, who are part of the history and origins of African socialism and the International through the leadership and battles of two prominent men, Léopold Senghor and Abdou Diouf. He also congratulated the opposition coalition Bennoo Sigil Senegal’s success in the regional and local elections, a victory to forge the way forward for the democratic process in Africa.

Participants discussed the lessons that can be learned from the financial crisis, with Secretary General Ousmane Tanor Dieng acknowledging that although the crises faced by the world today have given rise to fear and anguish, we can now confront this new sequence of problems with a new sense of shared cooperation and social inclusion where political action is placed at the service of human progress. The Committee additionally referred to the Economic Partnership Agreements (EPA) due to be signed between the European Union and CEDEAO, and the view was raised that though the Doha negotiations have reached an impasse due to the issue of subsidies from industrialised countries, Doha will lead the African economies to bind themselves more strongly to the economies of the industrialised countries.

The Committee in Dakar also focussed on the need to re-launch the democratic project in Africa, where alongside decisive advances for example in Ghana, where our member party won elections early this year, new fundamental challenges to democracy were posed in countries such as Niger, Mauritania, Guinea and Guinea-Bissau. Members of the Committee defined the notion of Governance as being associated with democracy and concerning the legitimacy of political institutions and the functioning of national and international organisations.

The Committee’s wide-ranging discussion culminated in the adoption of the Declaration of Dakar, which calls for measures of financial stabilisation, regulatory measures for the financial system in the region, and measures for the promotion of a diversified partnership between emergent countries and deprived nations. It was stressed that the EPA must focus on the reworking of multilateralism based on an awareness of the concerns of African and European parties, and the Committee called for strengthening and success of sub-regional and regional integration and an equal partnership.