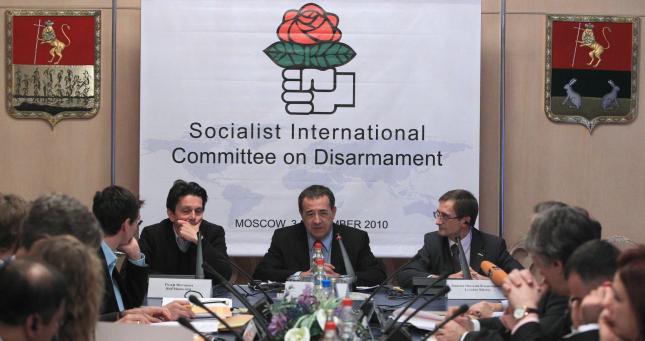 Members of the SI Committee on Disarmament met in Moscow on 3 November 2010, with discussions centred on NATO strategy and missile defence. Addressing the participants at the opening of the meeting, Nikolay Levichev, Leader of A Just Russia faction in the State Duma, underlined the importance of dialogue between NATO and Russia on these important issues of disarmament, welcoming the SI initiative to bring the Committee to Moscow, where these discussions would have particular significance. He also highlighted the enhanced cooperation between A Just Russia Party and the International, and the satisfaction of his party in being able to once more host such a gathering of members of the common global political movement.

SI Secretary General Luis Ayala echoed the sentiment that the meeting was an invaluable opportunity to hear debate the issues of disarmament in a Russian context, and to hear different perspectives and points of view on these crucial themes. Stressing that peace and disarmament issues had always been at the heart of the SI agenda, he spoke of the importance in politics of seizing the moment and making use of the opportunities presented by current political conditions. Chair of the Committee Rolf Mützenich was likewise appreciative of the invitation to Moscow, referring to the need to search for common answers to current threats. The 10-point plan on disarmament adopted at an earlier meeting of the Committee in Berlin had been a comprehensive analysis of the steps towards joint security through disarmament, he added, whereas this meeting was a chance for the Committee to focus on specific issues of relevance in Russia.

Following the introductory remarks, contributions were heard from both representatives of political parties present at the meeting, and from disarmament experts attending as guests. Exchanges focussed on the case for finding a spirit of co-operative security and the need for a limiting agreement to avert the danger of a new arms race in the field of missile defence. Participants were agreed on the need for better co-operation between NATO and Russia in the field of missile defence, a situation that would lead to a breakthrough in trust that was beneficial for all.

Over the course of the meeting, concerns were expressed about the implications of missile defence, and whether this represented a US model for defence rather than a European one. Whilst there was some acknowledgement that missile defence was firmly a part of US and NATO policy, the nature and origins of the threat, if not from within Russia or NATO, were questioned, and the need to find a solution acceptable to all parties emphasised. Existing Russian co-operation with NATO in a range of areas was also referred to as an example of a cause for optimism with regard to the future of missile defence.

The discussions of the Committee also touched upon the wider impact of the actions taken by NATO and Russia, in particular in relation to the south Caucasus, where stability in some of the more volatile areas is threatened. In this region in particular, but also in response to the general threats under discussion, the importance of moving beyond simply military or technical solutions to these threats was highlighted, with there being other alternatives to minimise risk, as the International has initiated by bringing about dialogue between Azeris and Armenians or in the Middle East, for example, where the use of common diplomacy is particularly important.

Rolf Mützenich summarised proceedings with a strong appreciation of the open and forthright nature of the discussions that had taken place, expressing his hope that in Lisbon talks would take place in a similarly open and constructive manner on the occasion of the NATO Summit. Picking up on the exchanges held on the subject of the CFE treaty, he suggested that conventional arms control needed to be brought back onto the agenda and could be a focus of a future meeting of the Committee.

In his concluding remarks, the SI Secretary General reiterated the importance of the role the SI could play, in particular by not giving up in the face of challenges and obstacles to peace, giving examples of the work of the International in bringing together all sides in conflicts, facilitating dialogue, for instance between Israelis and Palestinians, Armenians and Azeris, Moroccans and Sahrawis. The debate and exchanges that had taken place on the occasion of this Committee meeting were further evidence of the strength of the SI in pursuing solutions through peaceful and democratic means, engaging each side of the debate with perseverance and open-mindedness.

The Committee adopted a resolution based on its discussions, under the title of NATO Strategy and Missile Defence, calling for ratification of the new START treaty, greater engagement between Russia and NATO on nuclear policy, a new arms control agreement, and the pursuit of binding agreements on the future of missile defence. This resolution will be presented at the forthcoming meeting of the SI Council.