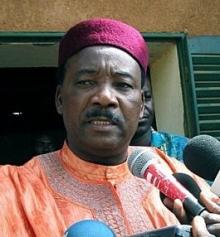 The Socialist International warmly congratulates Mahamadou Issoufou, leader of the Party for Democracy and Socialism of Niger (PNDS) and an SI Vice-President, who was sworn in as President of the Republic of Niger on 7 April, having won the second round of the presidential elections on 12 March with 57.95% of the vote against 42.05% for former prime minister and leader of the National Movement for the Development of Society, Seini Oumarou. His inauguration is an historic moment for Niger, and a sign of great hope and optimism for the people of that country.

President Issoufou, having won the first round on 31 January with 36.06%, had been the favourite for the run-off against Oumarou, who polled 23.2% six weeks ago. As someone who embraces our shared social democratic principles and has played a crucial role in the ongoing process of re-democratisation in Niger, Issoufou’s presidency will be crucial for the strengthening of the democratic institutions of that country and the opening up of more opportunities for its citizens.

The Socialist International has on several occasions during the last years held meetings and activities in Niamey, the capital of Niger, one of the poorest countries in the world, hosted by the PNDS and Mahamadou Issoufou. Equally, President Issoufou has participated regularly in the activities of the International elsewhere in Africa and in other parts of the world.

International observers hailed the conduct of the elections as free and fair and as an example for the rest of the continent. As President Issoufou himself said, “My election shows the commitment of the Nigerien people to democracy and change,” and Nigeriens can take pride in the way the campaign has been run and the integrity of all the candidates involved, who have shown great responsibility by adhering to the clearly expressed will of the people.