Special Committee on the Arab World

The spirit of Crete: democracy and freedom for the people of the Arab nations 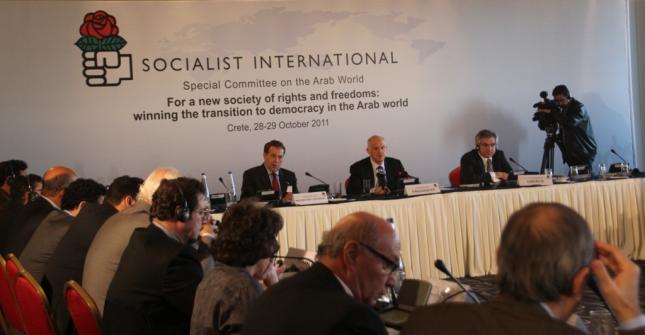 Latifa Perry
The Special Committee on the Arab World of the Socialist International established at the SI Council in Athens in July 2011 held its constituent meeting on the island of Crete on 28-29 October 2011 hosted by the Panhellenic Socialist Movement (PASOK), under the main theme, “For a new society of rights and freedoms: winning the transition to democracy in the Arab world.” Participating in the meeting were leaders and personalities representing progressive democratic forces from Egypt, Iraq, Lebanon, Libya, Mauritania, Morocco, Palestine, Syria, Tunisia, Western Sahara and Yemen, alongside other members of the International (list of participants).

Participants were warmly welcomed to Crete by PASOK Secretary General Michalis Karhimakis. Opening the meeting, SI President and Prime Minister of Greece George Papandreou pointed to the feelings of solidarity and support that the members of the Socialist International in different continents shared with all those who were leading the democratic struggles in the Arab world. Social democrats had in their political record been the architects of many democracies through their struggles against authoritarianism and dictatorships, as in the case of his country or of Chile among other places. Democratic governance was the result of processes that can be very diverse but had one thing in common: the respect for the will of the majority. Today Arab revolutions were of particular significance because they represented the will of the majority of the Arab people for change.

SI Secretary General Luis Ayala referred to the role that the International was set to play in continuing to support the democratic struggles across the Arab world. The Socialist International had established this Committee to exchange views and experiences, put forward initiatives and work together with the actors of change in establishing common objectives and goals for the development of the new democracies, in the understanding of a shared set of values and principles to which all those present were committed.

All delegations participating from the Arab world addressed the meeting on the issues affecting their respective countries, responding to the different themes on the agenda of the meeting.

In the aftermath of the first democratic ballot held as a direct consequence of the Arab spring, participants welcomed the positive developments from Tunisia, where legislative elections had been widely praised as free and fair with a high turnout. Delegates from Egypt reiterated the need for elections to take place in their country, expressing the hope that this would happen in the near future as the next step in its transition. Representatives of the Libyan National Transitional Council (NTC) were congratulated on the liberation of their country, which now required the support of the international community as it faced the challenges of transition and the need for national reconstruction and reconciliation.

The movements for change in Syria and Yemen, sharing the goal of an end to the current oppressive regimes which continue to commit criminal acts of repression and violence against their citizens, received the full solidarity of the members of the Committee in their respective struggles. The situation in Syria continues to deteriorate, with countless deaths caused by the attacks of the security forces on civilian activists, who need to be protected at all costs. The calls of support for the Syrian people were led by SI member parties from its neighbouring countries able to witness first-hand the consequences of the actions of the regime. In Yemen, President Saleh continues to cling to power despite overwhelming calls for his immediate departure from office to open the door for a transition to democracy without delay. The people of Yemen and the members of the Yemeni Socialist Party continue to need support after months of protest and large numbers of casualties in the cause of freedom and dignity. In the face of the daily violence taking place, it was reiterated that those responsible, including those in other countries in transition, must be held accountable for the criminal acts of indiscriminate killing, torture and aggression.

Also participating in the meeting were bloggers from Egypt, Libya, Morocco, Syria and Tunisia, who were able to present a different perspective from the point of view of those social media users who continue to play a substantial role in the advancement of the goals of the uprisings. These activists both assisted with the coordination of protest and ensured the dissemination to the wider world of information on the true nature of the political violence used by undemocratic regimes, circumventing restrictions placed on the media by those regimes and making the true extent of their actions visible to all. Among their concerns were that those trusted with responsibilities during the transition fulfil their obligations to the citizens, ending those practices as well as current military trials of civilians. Paying tribute to the ordinary people who had contributed to the end of despotic regimes, the Committee stressed the importance of ensuring that the actors of change continued to be heard under the new political system, with a need for the representation of women and young people who had played a fundamental role in the uprisings.

The support of the social democratic political family for the movements for change in the Arab world and the common objectives and principles of social justice, human rights, freedom of speech and expression and representative democracy shared by them are interlinked. The Committee heard from SI members facing forthcoming elections in Morocco, where socialist forces will stand with the full support of the global movement as they present a social democratic platform to the Moroccan people. The Committee equally supported the call of the Assembly of Democratic Forces (RFD) for free and fair elections to be held in Mauritania, granting genuine democracy to the citizens of that country.

The continuing role of the Socialist International and social democracy on the issue of conflict resolution in the region was again underlined. The support of the SI for recognition of a Palestinian state based on 1967 borders and for a resumption of peace negotiations was highlighted, a vital step towards the solution long advocated by the organisation of two states coexisting in peace and security. The resolution of the Western Sahara conflict was viewed as another key to regional stability, and hope was expressed for a peaceful and lasting solution in line with the resolution adopted by the last SI Council in Athens. The Committee made a special call for the immediate liberation of European aid workers recently kidnapped from the refugee camps in Tinduf.

The meeting closed with a declaration embodying the commitment of all participants to a common undertaking which they called “the spirit of Crete” for democracy and freedom in the Arab world.
______