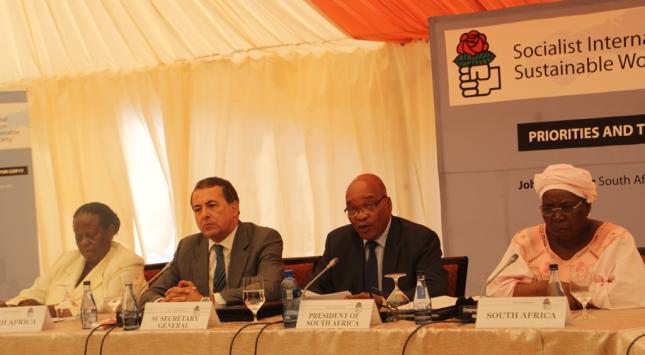 Latifa Perry
The Socialist International Commission for a Sustainable World Society and environment ministers from member parties of the International met in Johannesburg, South Africa on 30-31 October 2011, to discuss the social democratic priorities for the COP17 conference on climate change to take place in Durban from 28 November-9 December.

The formal sessions of the meeting were opened on 31 October by His Excellency Jacob Zuma, President of the Republic of South Africa and a Vice-President of the SI. President Zuma greeted participants and thanked them for their presence in South Africa to discuss the critical issues of climate change. In his address, he outlined the heavy responsibility and sense of urgency felt as his government prepared to host the COP17. Referring to the contribution of the Commission’s work to the success of COP16 in Cancún, he expressed his belief that the meeting in Johannesburg could fulfil a similar role in relation to the Durban summit.

South Africa’s priorities, the President continued, were based on a balanced, fair and credible outcome to COP17. Crucial to tackling the clear and present danger of climate change were putting into operation the Cancún agreements, in particular the Green Climate Fund, whilst continuing to deal with the outstanding issues from the Bali roadmap relating to the second commitment period of the Kyoto Protocol. Developing countries also placed great emphasis on progress on the issues of mitigation and adaptation, President Zuma stressed. Whilst underlining that it would not be easy to achieve consensus in all those areas in Durban, he concluded that now was the time to work together, and save tomorrow today.

SI Secretary General Luis Ayala responded by thanking President Zuma for his warm welcome and applauded the commitment he had shown to ensuring the success of the climate negotiations in his country. Ayala outlined the developments since the last meeting of the Commission, held in Mexico City in advance of COP16, expressing the hopes of the International for progress on the Green Climate Fund, on deeper emissions reductions which should be formalised and on adequate financing for mitigation and adaptation measures. These measures apply in particular to developing countries, which would be aided by the increased provision of finance, technology and capacity-building support.

The Secretary General underlined the commitment of social democratic and progressive forces to tackling climate change and their work to secure advances even at a time of global economic turmoil, speaking of the need for the political will to truly make a difference at COP17. Of great significance was the holding the negotiations in Africa, one of the continents most affected by climate change, and he placed the concept of climate justice as central to a positive outcome from Durban, pledging the support of the Commission to the government of South Africa in its efforts to make it a success.

Maesala Kekana and Tshepo Moremi, members of the negotiating team of the South African Department of Environmental Affairs reported on preparatory meetings which had taken place and on the current status of negotiations. Progress had been made on the framework on the Green Climate Fund to be approved in Durban and on technology, but that in other areas, notably adaptation and the extension of the Kyoto Protocol much remained to be done.

The grave consequences of a failure to find agreement on the second commitment period of the Kyoto Protocol were also of great concern to participants, with Durban representing the last opportunity to ensure that there is no gap after the current commitment period ends at the end of 2012.

During the discussion, particular attention was paid to the situation facing Small Island Developing States (SIDS), which are threatened with disappearance under rising sea levels if the global temperature increase is not limited, an important issue of human rights for the citizens of those states. The imminent threat to these states, which include 38 members of the United Nations, further accentuated the insufficient nature of the emissions cuts agreed by developed nations in Cancún. The fact that those countries which are least responsible for climate change are suffering disproportionately from its consequences was also raised, with a clear realisation from all those present that the onus was on developed economies to show more leadership and accountability.

This unbalanced situation where developed nations are both the highest contributors of per capita emissions and those best placed to deal with the effects of a changing climate underlines the need for effective measures to secure the necessary funds for mitigation and adaptation to redress this disequilibrium. As pledges made in Cancún were insufficient to reduce the level of CO2 in the atmosphere to within the safe limit for humanity, it is ever more urgent that adaptation be given equal priority in order that developing countries are able to cope with more serious climate change and climate-related shocks such as drought and flooding which are likely to occur if current policies are maintained.

Ministers and representatives also took the time during their contributions to explain measures and initiatives taken by their own governments to combat climate change in their respective countries, making the meeting a useful forum for exchanging experiences of success in this field. The spirit of cooperation and of a determination to take the necessary action amongst those present were reflected in the closing remarks of Minister Nkosazana Dlamini Zuma, who had no doubt that the outcome of Durban would be overwhelmingly positive if only it could take place in such an atmosphere. A further opportunity for exchanges of views and opinions of the participants from member parties of the Socialist International present in Durban was agreed, through which delegates would continue their close cooperation on the issues at hand.

Following the discussions, the Commission adopted a declaration entitled ‘On the Road to Durban: Priorities and Targets for COP17’, agreed by all participants, which presented the clear conclusions of the meeting on what needs to be achieved in Durban.