The CIS, the Caucasus and the Black Sea

Meeting of the Socialist International Committee for the CIS, Caucasus and Black Sea, Tbilisi, Georgia 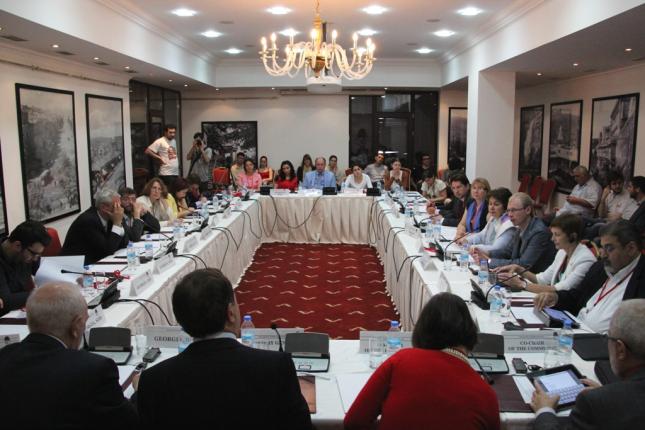 Latifa Perry
Socialist International member parties from the CIS, Caucasus and Black Sea region gathered in Tbilisi on 3-4 June 2013, to discuss current priorities and challenges to social democracy in the region and ways to overcome conflicts, a fundamental need to achieve fair and prosperous societies. The meeting was hosted by the SI member party in Georgia, the Social Democrats for Development, SDD.

At the opening of the meeting, the SI Secretary General affirmed that social democracy was present in all countries of the region, even where the most challenging situations existed, and that it was the way forward for people in their struggles for democratic governance, conflict resolution, and fair social and economic progress. He underlined the SI’s satisfaction at formally meeting in Georgia, the very first country to have had a social democratic government, which came to office in 1918 following the country’s declaration of independence. There were many issues to solve in this region and our political family stood ready to meet those challenges together, based on truth, real democracy and solidarity.

Gia Jorjoliani, leader of the SDD, thanked all the participants for their presence and welcomed the opportunity to discuss the problems of the region. They were soon to celebrate the 95th anniversary of the social democrats’ first taking office in Georgia, and today they looked forward to further developing social democracy, aware of the new opportunities that had emerged from the 2008 financial crisis, which was in effect a crisis of neo-liberalism. A new phase had begun, and the Georgian social democrats were seeking a new approach, an alternative to the politics of austerity and experimental management of the country without democracy. It was clear to them that politics without the social dimension could not lead to genuine democracy.

The discussions of the Committee, co-chaired by Vahan Hovhannesyan of the ARF-D of Armenia and Alexandra Dobolyi from the MSzP of Hungary, with Committee vice-chair Oleg Tulea of the PDM of Moldova, concentrated first on an examination of the current challenges faced in the different countries of the region. During these discussions, it was observed that in the two decades since the fall of the Soviet Union, many countries had not been able to progress from ‘irresponsible order and totalitarian societies’, with their governments focusing on the free market as the solution to everything. It was therefore necessary to break the domination of oligarchic regimes and to push forward social policies, healthcare, education for all, equal opportunity, and greater citizen participation.

It was highlighted that there were many people, parties, organisations and movements throughout the region that shared social democratic principles, therefore the first task should be to harness those forces and inspire people to support these policies, given that there was a tendency for people to vote for the ruling party when feeling most vulnerable, or to turn to nationalism or religious extremism. As the neo-liberal ideology was so deeply rooted among the elites, new efforts had to be made to explain the content of social democracy and to make our voices heard. Despite the differences in the various countries, which included coalition governments or shared platforms, it was observed that all faced a common challenge in neo-liberalism. There were also cases of good practices, such as that of Moldova whose experience could be shared, and others which illustrated that democracy, once arrived at, constantly needed defending, updating, and consolidating.

On the subject of peace and overcoming conflict, it was noted that one of the most serious obstacles to achieving fair and prosperous societies in the region was that of territorial conflicts. In Georgia there were two, Abkhazia and South Ossetia, which, it was reported, were ethnic conflicts but had been manipulated by the former nationalist, ultra-right regime to create the concept of an internal enemy in order to legitimise their hold on power and divert attention from the problems of democratic governance, the demands for human rights, a fair economy, and social welfare. The legacy of the Soviet system, where people were observing, not participating, and had no reason to cooperate and unite for common goals, along with the hegemonic ideology of neo-liberalism that followed, contributed to the ‘isolation and atomisation’ of society, to a lack of common purpose and to a deepening of differences.  The question today was how to manage the borders within the present moratorium and how to achieve the common goal of social and economic development. There was a new, progressive approach: that cooperation on agriculture, development and a social-oriented system could constitute a way out for these conflicts. In the context of other regional conflicts in general, it was observed that this approach was a good one providing there was dialogue and no one side was seeking ultimate unconditional victory. Regarding Nagorno-Karabagh, it was stated that the positions remained entrenched and that the key task there was to continue promoting and building opportunities for direct dialogue, as the SI had previously done between Armenia and Azerbaijan.

The Socialist International is known as an organisation of people who reach out to each other for understanding and dialogue, as had been seen in relation to other conflicts. It was proposed, and agreed by the Committee, to identify political actors or like-minded people in Abkhazia and South Ossetia, in order to undertake an SI initiative to engage them in common discussions.

Throughout the Committee’s debates was the common thread of international Solidarity, perceived as the core of our social democratic identity. Faced with the challenge, in parts of the region, of savage capitalism and neo-liberalism on the one hand, and radicalism on the other, it was emphasised that cross-border cooperation and transnational solidarity must be intensified and preserved.

Participants at the meeting also presented brief reports on their national situations, sharing with others the current realities in their respective countries. The Committee heard with concern about the latest developments in Turkey where citizens, exercising their right to free assembly, had been victims of police brutality and increasing authoritarianism, and where the CHP, an SI member, continued in its struggle for rights, freedoms, democracy and social justice.

In the case of Georgia, participants learned of the process of transformation underway in the country and the steps taken by the government, which counts with the support of the SI member SDD, towards the achievement of universal education and healthcare, poverty reduction, and the development of village and labour relations.

In the Ukraine, it was reported that the regime of Yanukovych was showing signs of returning to authoritarianism, and the Committee expressed its support for the efforts of the people fighting for justice. It was noted that in Belarus social democrats still struggled to make their voices heard, but they continued to fight for rights, freedoms and democracy. It was reported that the situation of the imprisoned opposition BSDP (NH) leader, Mikalai Statkevich, had worsened, and the Committee, in its final Declaration, called for an end to the persecution of all opposition leaders and for their liberation and rehabilitation. In the case of Kazakhstan, a society characterised by inequality, division, control of the mass media and a lack of other freedoms, the SI member OSDP continued in its efforts to promote social democracy and the country’s political modernisation. Concerning Azerbaijan, the Committee was informed that the SDPA would be putting forward their own candidates in the next elections. It was reported that President Aliyev was implementing a series of social policies, however it did not have an ideological base. In the final Declaration of the meeting, the Committee members expressed support for the re-establishment of the SDPA’s status in the SI.

As regards Moldova, considering the former situation where the authoritarian communist regime had been in control and there existed no culture of dialogue, the PDM had worked for a coalition, giving new hope to the country and its citizens, and bringing Moldova closer to its European neighbours. Gratitude was expressed to the SI for the constant support it had received during this process. In the case of Armenia, it was noted that there were not the classic issues between left and right, as there was a shared platform with common principles in the coalition government. Within that framework, however, the ARF-D, continued to promote social democratic ideals in the interests of the people. In Hungary, although part of the EU, the SI–member MSzP continued to work to defend citizen’s rights and democracy. It was reported that the Party was preparing for elections in 2014, which they had the chance to win, although amongst other things they were facing changes to legislation affecting party financing. The Committee also heard a report on the current situation in Greece, where the economic crisis had taken a heavy toll on society, and on a humanitarian level, and where the consequent danger of a resurgence in political extremism existed.

Looking ahead at the Committee’s future programme of work, it was agreed to pursue a number of initiatives, including a visit to Belarus, a meeting in Ukraine, a mission to Tajikistan in connection with the next elections, to continue building on the SI’s previous work in regard to Nagorno-Karabagh and on relations between Armenia and Azerbaijan, and to search for an opportunity for dialogue involving South Ossetia and Abkhazia.

At the conclusion of the debates, the Committee adopted a Declaration of the meeting.