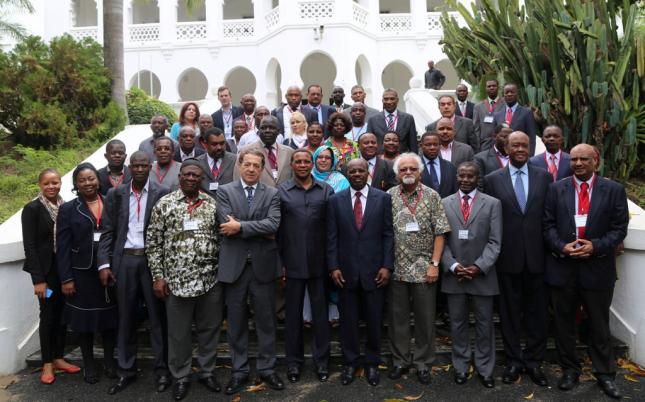 H.E. President Kikwete and participants at the meeting

Leaders and representatives from over twenty parties and organisations took part in the two-day meeting of the Socialist International Africa Committee which was held in Dar es Salaam, Tanzania, on 28-29 March, hosted by the SI member party in that country, Chama Cha Mapinduzi, CCM. (List of Participants)

The Secretary General of the Socialist International, Luis Ayala, and the Chair of the Committee, Emmanuel Golou, addressed the gathering at the opening. Luis Ayala recalled Julius Nyerere and his work with the SI on such crucial issues as the struggles for national independence in Africa and South-South cooperation. He greeted the contribution of the CCM to the development of multi-party democracy, the struggle against poverty, and their policies for peace. Wherever there was a deficit of freedoms or rights, there would be conflict, he said. Socialists in Africa have demonstrated that peace needs to be nurtured with rights and empowerment. Democracy and social justice was also the vision of the SI for Africa.  Emmanuel Golou, in his opening statement, recognised the achievements of the government of Tanzania for peace, stability and economic progress in the country. In his view, the main challenges for the region were economic development, combating poverty, bringing about true democracy and establishing a secure environment. He also highlighted the need to enhance the role of women and to ensure that Africa should play its due role in the international community. This should be achieved through economic policies that should not only concentrate on exploiting and exporting raw materials.

Among the issues discussed at the meeting were ‘Our commitment to peace and the resolution of conflicts in the region’; ‘Participative democracy, solid institutions and good governance’; ‘For an economy that serves all the people, respects nature and provides growth’; and the future work of the Committee.

Julião Mateus Paulo, Secretary General of the MPLA of Angola and a Vice-President of the SI, was an introductory speaker on the first theme. He underscored the need to do away with injustice, extreme poverty and bad governance in order to achieve peace and stability. While collective efforts had led to stabilising some areas of conflict, others remained. Conflicts did not only affect the countries where they originate but also adversely affected the process of integration and development in all Africa. Each conflict had its own long history with numerous details and responsibilities, which were not always taken into account in the search for solutions. Conflict was often the result of political actions and in this regard it was stressed that the Socialist International needed to be in forefront of the efforts deployed to solve them. Professor Eginald Mihanjo from the CCM of Tanzania also presented an exposé on this subject from the perspective of his country and highlighted several key areas. Firstly, wars are very expensive, so investing in peace was of great importance and in Tanzania the CCM had consistently championed peace policies. He noted that today most conflicts were internal rather than between states and that there was an increase in irregular threats, some of the causes being the lack of grass roots policies, political parties that lacked discipline and situations where policies were personalised rather than in the national interest. Poverty was a key threat to peace, it created situations of hopelessness and conditions for other kinds of ideological threats such as religious intolerance. The roadmap to peace must include the liberation of the poor, which then must be defended.

Other areas highlighted during the debates on all the themes of the agenda included the concept that peace and development went hand in hand, one could not exist without the other; that sustainable peace will only exist when the conditions that lead to war are removed; investing in peace means redressing economic imbalances and the democratisation of the wealth-generating process; tackling youth unemployment and converting the energy of youth into economic activity; creating quality democratic institutions, political inclusion, elimination of the practice of bad governance, support for national reconciliation, and ensuring that people are governed by leaders rather than rulers.

Democracy was at the root of all success, and democracy was needed at all levels, starting from cells in the communities, to regional and national representation, and in all the instances up to the leadership of parties. Ideological orientation was important, following on from the anti-colonialism and pan-Africanism that had guided the liberation movements, to avoid the emergence of extremism or authoritarianism.

It was recognised that Poverty was the biggest challenge on the continent. Many participants underlined the urgent need for African countries to manage their own natural resources, which for too long had been allowed to be exported elsewhere at low cost. Instead, all agreed that these should be used to generate employment and wealth for Africa and its people.

It was agreed that the SI Africa Committee should be used for inter-party exchanges and consultations; and for developing ways in which the SI can assist where needed.

During the course of the discussion on peace and conflict resolution, the Committee addressed the situation in Central African Republic, where the humanitarian situation is catastrophic, and agreed on the sending of a mission to see how the SI can contribute to ending the carnage there.

The Committee equally agreed on the visit of a mission to South Sudan as soon as possible, where the consequences of the open confrontation by the two warring factions on its people and their ongoing suffering called for an urgent end to the conflict.

In the context of these discussions, the Committee adopted a Motion on Mali in which it welcomed the progress achieved in the search for a way out of the multi-dimensional crisis in the country. It welcomed the election of President Ibrahim Boubacar Keita and saluted his leadership in the efforts to strengthen democracy, the rule of law, peace, security and stability in Mali.

The situation in Cote d’Ivoire was a subject of concern for the Committee, where there existed a situation of generalised insecurity, massive violation of human rights and the arbitrary detention of politicians and military personnel close to the Ivorian Popular Front (FPI). Participants at the meeting voiced support for reinstating the membership of the FPI in the Socialist International and in a Resolution on the situation in Cote d’Ivoire, agreed to send a fact-finding mission to the country.

The Committee also adopted a Resolution on the situation in Swaziland, expressing concern at the violation of fundamental human rights and the arbitrary arrest and incarceration of attorney Thulani Maseko. The resolution also calls on the authorities of the country to unban political parties, including the SI member PUDEMO, and for national dialogue leading to a transition to democracy.

A Statement of the Socialist International Africa Committee was issued after the conclusion of the meeting, highlighting the key issues discussed.

Members of the Africa Committee reaffirmed their full commitment and support for the Socialist International and strongly opposed the efforts of those within the organisation to undermine it, declaring that today’s International is open, inclusive and democratic through the decisions adopted by its membership at the last SI Congress in Cape Town, the first ever held on the African continent.

On the situation in Western Sahara, while referring to previous resolutions, the Committee recommended the engagement of a sound dialogue between all groups and parties both in Morocco and Western Sahara for a peaceful and mutually accepted solution.

As part of the agenda, participants exchanged views on the organisation and future work of the Committee. A number of initiatives and proposals were aired, following which the Committee agreed to form a group to work on these ideas and to come up with a set of proposals for the next meeting of the Committee to take place in October this year.

The President of Tanzania H.E President Jakaya Mrisho Kikwete offered a lunch for all participants at the Presidential Palace. Addressing the gathering, he said he was proud to be a member of the Socialist International, where the sharing of experiences and challenges was very valuable. He was also very pleased that this meeting was being held in his country.

Participants were unanimous in expressing their recognition of the host party, the Chama Cha Mapinduzi, CCM, and H.E. President Kikwete for the warm fraternal welcome received and their congratulations for the advances and progress made in Tanzania under the leadership of President Kikwete and the CCM.