Meeting of the SI Committee for the CIS, the Caucasus and the Black Sea in Yerevan 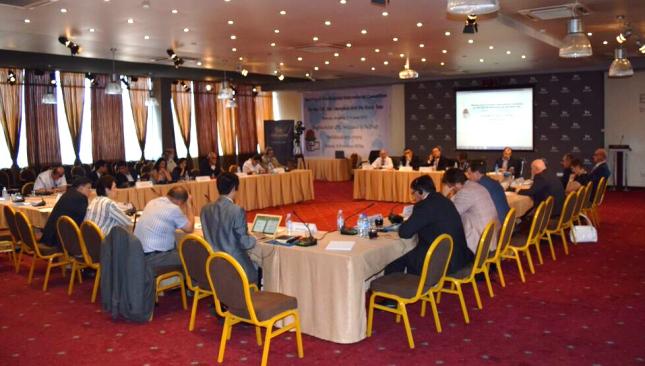 The SI Committee for the CIS, the Caucasus and the Black Sea met in Yerevan, Armenia on 8-9 June 2015, hosted by the SI member party in that country, the ARF Socialist Party. The meeting, which was opened by SI Secretary General Luis Ayala, was chaired by Armen Rustamyan (Armenia ARF, co-chair of the committee), Alexandra Dobolyi (Hungary MSzP, co-chair of the committee) and Oleg Tulea (Moldova PDM, vice-chair of the committee). Delegates from countries across the region discussed the three themes on the agenda, namely the regional priorities of strengthening and extending democracy, securing peace and the resolution of conflicts, and advancing the social democratic agenda.

The meeting was marked by the presence of a delegation from the SDPA, the SI member party in Azerbaijan, whose full participation in the meeting and discussions symbolised the spirit of cooperation and dialogue that characterises the global social democratic movement. Regardless of the ongoing tensions between Armenia and Azerbaijan, representatives from the ARF and SDPA engaged in fruitful exchanges over the two days.  At the conclusion of the meeting, members of the committee adopted a declaration that encompassed the main points of agreement.

At the opening of the meeting, all those present observed a moment's silence in memory of Vahan Hovanessian, former leader of the ARF and co-chair of the committee, who passed away in December 2014.

On the theme of conflict resolution, the committee reiterated the fundamental belief of the international that peace is necessary for development and prosperity. The declaration reflected the established position of the International on the need for dialogue as a means to bring unresolved conflicts to an end. The committee further called for a ceasefire and respect for international law in eastern Ukraine, and adherence to the provisions contained in the Minsk II agreement.

Conflict is also linked to democracy, as the establishment of genuine democracy can help to eliminate the deficit in rights and freedoms that is a cause of conflict. In-depth exchanges took place on strengthening and extending democracy in recognition of the lack of effective democracy in the countries represented at the meeting. Delegates reflected on the need for the free expression of political will and discussed ways in which member parties of the Socialist International in the CIS, Caucasus and Black Sea could better cooperate to advance shared aims.

Democracy is not just about elections, but is also reflected in the opportunities granted to opposition parties in the period between elections. In a functioning democracy the opposition has an important role as a counterweight to the government and able to ensure that it does not rule without scrutiny. The severely diminished and suppressed opposition in many countries of the region is left neither able to hold the government to account nor build for future elections.

Participants also agreed to place strong emphasis on the social democratic agenda as a way to better communicate the message of social democracy. It was agreed that social democracy was greatly needed in the region in order to present a viable alternative to nationalism and neo-liberalism. The social democratic ideology, which focuses on the needs of all rather than a privileged few, should resonate with citizens deprived of their rights under authoritarian and anti-democratic regimes.

One particular area in which members of the SI were taking the lead was in the fight against corruption, which must be eliminated with the help of reinforced institutions, a strong and independent judiciary and a clear and transparent framework for the pursuit and eradication of financial misconduct.

The reports on national situations in the countries represented were given in the context of the themes of the meeting. Delegates heard how new presidential elections in Belarus would take place later in 2015 despite the continued imprisonment of presidential candidate Mikalai Statkevich following the previous elections. A message from Statkevich was read out in which he thanked the SI for its support and reaffirmed his commitment to freedom, justice and solidarity.

Democracy is also absent in Tajikistan, where the ruling elite has vastly superior power and resources and is denying fundamental rights. An increase in ethnic and religious tensions has also contributed to a precarious situation. The opposition had been denied its democratic right in Kazakhstan, where the SI member party the OSDP was preparing for the next parliamentary elections and trying to present an alternative to the dominance of the ruling party. Azerbaijan also reported problems with elections and public administration.

In Armenia, the ARF was making efforts to improve the system of governance, as this would bring about more effective development and strengthen democratic pluralism. This was a great challenge due to the lack of influence wielded by the opposition and a void in between elections. Progress had been made on democracy in Georgia at the 2012 election, but the ruling coalition had not yet been able to overcome the country's economic obstacles, and the task for social democrats was to engage students, trade unions and workers to change the neoliberal consensus. Difficulties of a different nature had been experienced by the SI member party in Moldova, where delays in forming a coalition and a banking scandal had left the situation unstable.

The committee was updated on latest developments in Ukraine, and heard calls from the representative of that country for withdrawal of forces and respect for the integrity of Ukraine's borders. Democracy in Ukraine was also experiencing severe difficulties, with the authorities trying not to allow room for new political parties to operate. The Russian delegation called for a focus on the social democratic agenda in the region, to counteract neoliberal and neo-nationalist powers which were turning the post-Soviet region into a battlefield.

The Socialist International Committee for the CIS, the Caucasus and the Black Sea, meeting in Yerevan on 8-9 June 2015, discussed the regional priorities of strengthening and extending democracy, securing peace and the resolution of conflicts and advancing the social democratic agenda.

In many countries of the region, the democratic process and its institutions need to be strengthened, and social democratic parties can be at the forefront of these efforts.

The committee condemns the anti-democratic practices prevalent in countries of the region, where a lack of free and fair elections give no prospect of a democratic change in government. Opposition parties are too frequently being denied their voice, with the incumbent ruling elite able to suppress opposition by manipulating their access to power. The free expression of political will and its translation into representation is the foundation of any true democracy and the development of multi-party democracies is crucial.

The committee supports the proposal of its member party for the transition to a fully proportional election system in Armenia, with a corresponding move towards constitutional changes aimed at adopting a parliamentary form of governance. The country also needs legal measures to strengthen the opposition in its role of controlling and counterbalancing the authorities, and full independence of the judiciary.

The committee noted that presidential elections will once again be held in Belarus, despite the many unresolved issues arising from the previous election in 2010. The arbitrary jailing of political opponents is unacceptable and we reiterate the support of the SI for Mikalai Statkevich, who remains imprisoned despite repeated calls from the SI and other international actors for his release.

The committee expresses its solidarity with the SI member party in Kazakhstan, the OSDP, in building a broad coalition of the National Civic Assembly in preparation for upcoming parliamentary elections. It supports all efforts by the party to to provide real an alternative to authoritarianism in the form of a democratic and socially responsible state.

The committee welcomes the profound democratic changes in the spheres of freedom of speech, media and political pluralism, which have taken place in Georgia since 2012. We further encourage the ruling coalition to prioritise development-oriented policies, to enable Georgia to achieve a more inclusive and just economy and fight extreme poverty and inequality.

The committee considers that the establishment of genuine democracy can also help advance the cause of conflict resolution, by eliminating the deficit in rights and freedoms that is a cause of conflict.

The committee recognises that the region's unresolved conflicts are a matter of urgent concern, and emphasises the need for peace and protection of life as an utmost priority. Peace comes before all else, as without it there can be no prosperity or development. Conflict also brings additional challenges to democracy when it is used as a pretext for restricting opposition and consolidating power.

The work of the committee underlines the fundamental importance of dialogue to the process of conflict resolution, and bringing together delegates from Armenia and Azerbaijan in Yerevan demonstrates the unique character of the Socialist International in this regard. Resolving such a long-standing dispute, with many intersecting claims on the different sides will require great patience and commitment. The SI will continue to prioritise this spirit of dialogue and mutual understanding through the work of its committee and use the opportunity created by this meeting to reach out to the leadership of both countries in the interests of peace.

The committee reiterates its declaration on overcoming conflicts and securing peace in the region issued in Astana in September 2014, and regrets the lack of progress made in securing a genuine ceasefire in Ukraine. We urge the parties to the conflict to uphold international law and implement the ceasefire as outlined in the Minsk II agreement, along with all the other provisions therein.

Social democracy has a vital role to play in the battle against inequality, which is of utmost importance to the long-term development of countries of the region and prosperity of its citizens. The role of social democracy is to constructively oppose policies that focus merely on serving narrow interests, and instead prioritise the promotion of equality, social justice and sustainable development in the interest of all citizens.

Social democratic parties are committed to the fight against corruption, which is a means by which power becomes entrenched and public funds are diverted away from their intended purpose. Corruption is a scourge and must be tackled in all its forms, with the help of reinforced institutions, a strong and independent judiciary and a clear and transparent framework for the pursuit and eradication of financial misconduct.