Meeting of the SI Council in Luanda, Angola 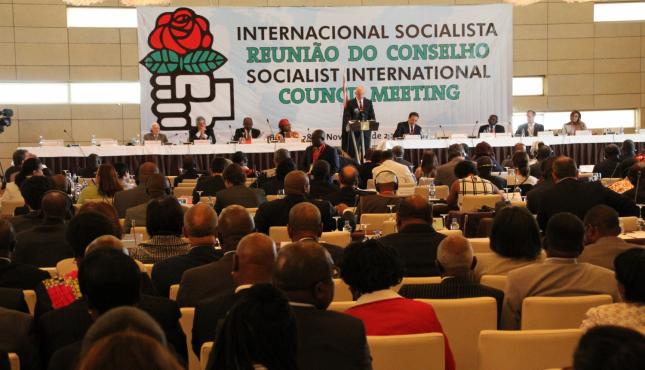 The Socialist International held its second Council meeting of 2015 on 27-28 November in Luanda, hosted by the MPLA, its member party in Angola. Delegates converged in Angola's capital representing SI member parties and organisations from across Africa, Europe, Latin America, Asia and the Middle East. The meeting addressed the main themes of "Working for global stability, peace and security in times of crisis", "Struggling for equality and common progress in an interdependent world", and "COP21 – Our goal for a universal binding agreement, common commitments, differentiated demands and precise objectives".

The meeting opened with a minute of silence, in memory of all those who had recently lost their lives in acts of terror around the world. This support and solidarity was also reflected in a declaration later adopted outlining the SI position with regard to the terrorist threat.

Another major declaration was addressed at the COP21 conference in Paris, due to open just two days after the Council. In it were set out the aims and priorities of the International for a universal binding agreement, with common commitments, differentiated demands and precise objectives.

The meeting was opened by the Secretary General of the SI, Luis Ayala,who highlighted the global nature of the challenges we face today, be they conflicts in any corner of the world or the struggle for freedoms and rights anywhere. The Council meeting was a manifestation of the commitment of the SI to find responses to global challenges, to secure peace, democracy, equality and human rights and to tackle terrorism and climate change. Around the world, members of the SI had been elected to advance this agenda. He thanked the host party for their hospitality and congratulated all Angolans on the recent anniversary of their independence.

SI President George Papandreou, in his opening address, also paid tribute to the people of Angola on the fortieth anniversary of their country's independence, noting how since the end of its civil war it had become a flourishing democracy free from outside interventions, that was internationally engaged both in the Great Lakes region and on the UN Security Council. He reflected on the interdependence of humanity's problems, with the refugee crisis linked to terrorism, insecurity and inequality. He underlined that military action against terrorists could only be effective in tandem with a plan for peaceful transition.

Delegates were warmly welcomed to Angola by Julião Mateus Paulo, MPLA Secretary General and a Vice-President of the SI. He recalled the 500 years of colonial history that had preceded independence in Angola, and the long civil war that followed, and outlined the path taken by the government for development since 2002. He outlined how there existed new military, economic and social tensions on an international level, and that Angola was searching for a durable peace in Africa and engaged in initiatives in the Great Lakes region.

On the first main theme, Manuel Augusto, Secretary of State for international relations of the government of Angola, outlined the engagement of the country in the international sphere in favour of peace processes, in particular in Africa. During the discussions, delegates representing countries recently touched by terrorism spoke with great dignity and solemnity. The Council was informed of steps taken by President François Hollande and President Ibrahim Boubacar Keita in response to the recent terrorist acts committed in Paris and Bamako, with representatives of their parties underlining their determination to overcome this scourge and appealing for the solidarity and support of those present and the international community in this struggle.

The breadth and quality of the interventions underlined the will and determination of all those present to fight terrorism in all its forms and make the world a more peaceful, stable and secure place. In addition to the detailed declaration of the Council on this theme, a separate declaration on the refugee crisis was adopted, which acknowledges the link between conflict and terrorism and the flows of migrants seen across the world today. The declaration urges the international community and European Union to fulfil their ethical responsibility faced with almost unprecedented refugee flows.

On the theme of equality, a broad range of views was heard advocating equality in many forms – both between the richest and poorest within societies, between developed and developing countries, and between different genders and social groups. Delegates outlined the challenges faced in ensuring that the benefits of development reach all sectors of the population, as well as the importance of the role that social democracy would have to play in this process. The diverse contributions during the debate underlined the important work that will be undertaken by the SI Commission on Equality, which will meet during 2016 to define approaches and priorities of the social-democratic movement in the struggle to eliminate inequality in the global economy.

The timing of the Council just days before the opening of the COP21 Summit in Paris gave an opportunity to address a strong message for an outcome to the climate negotiations built on social democratic ideals and the move towards a sustainable world society. Fátima Jardim, environment minister of Angola, gave an introduction to the debate, underlining the commitment of her country to a positive result at the summit and the steps it was taking in regard to its own emissions reductions. In addition to the declaration of the Council on climate change and COP21, the secretary general reported that the SI would have a presence in Paris, in order to ensure that the social democratic voice and its proposals would be heard during the talks.

The Council gave a particularly warm welcome to the recently released political prisoner Mikalai Statkevich, who was incarcerated in Belarus for four years and eight months on false charges, following the fraudulent presidential election of 2010, with much of that time spent in solitary confinement. He recounted the circumstances of his arrest and imprisonment to the Council and thanked the Socialist International for its sustained efforts to secure his release from prison.

Recognising the fraternal hospitality of the host party and the milestone that this year represents in the history of Angola, The Council adopted a declaration marking the historical struggle and civil war in Angola, and the progress made towards peace and reconciliation since it was brought to an end. A statement was also adopted in relation to the upcoming legislative elections in Venezuela.

The Council equally approved the report of the SI Finance and Administration Committee and adopted the budget for 2016. The Committee’s report included an update on the payment of fees, a condition for membership which, in accordance with the statutes, is ceased if these are not paid for three years.

At the closing of the meeting, the Secretary General thanked the host party for their hospitality and said that the SI would take the principles and positions of the organisation forward at the COP21, where members would be the following week. The SI President closed the meeting by stating that in a time of paradox and contradictions, politics must not be confined to national borders but needed to be international and inclusive, to combat division, hate, populism and xenophobia. There was no way to solve problems by hiding behind walls, and it was the task of all those present to continue to work together for a better world.

Declaration on climate change and COP 21

Declaration on the Refugee Crisis

Declaration on the legislative elections on 6 December in Venezuela