Socialist International focuses on Africa at meeting in Accra, Ghana 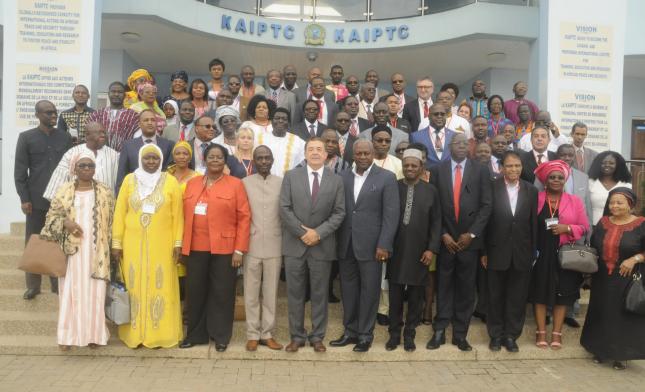 H.E. President Mahama with participants at the meeting of the SI Africa Committee in Accra, Ghana

Under the main theme of: “Advancing our social democratic vision in Africa”, the Socialist International held a meeting of its Africa Committee in Accra on 7-8 October 2016, hosted by the National Democratic Congress, NDC, the SI member in Ghana.

Bringing together member parties from all parts of the continent, the meeting took place at the Kofi Annan International Peace-keeping Centre in Accra, a symbolism that was not lost on participants, particularly at a moment when António Guterres, a former President of the Socialist International, was announced as nominated by the UN Security Council for the position of Secretary-General of the United Nations.

At the inaugural session of the meeting, a warm welcome was extended to all participants by Hon. Kofi Attor, Director of International Relations of the NDC. Following an opening speech by the SI Secretary General, Luis Ayala, the gathering heard from SI Vice-President Pendukeni Iivula-Ithana, Home Minister of Namibia, the Committee Chair, Emmanuel Golou of the PSD Benin, and SI President, George Papandreou. H.E. Kwesi Amissah-Arthur, Vice-President of the Republic of Ghana, made a special address to all participants.

In the working sessions which followed, Committee members held broad discussions on two main themes. On the first theme “Advancing our social democratic vision in Africa: securing jobs, guaranteeing accessible quality education, developing health systems and ensuring social protection for all”, there were in depth contributions on its various dimensions from the different national perspectives represented at the meeting and there was agreement on a number of points based on the ethos of democracy, good governance and the associated social responsibilities that make up the cornerstone of our identity as socialists and social democrats. Some of the elements of the discussion are reflected in the Declaration of Accra adopted at the conclusion of the meeting.

Under the second main theme of “Peace and Security – working together building common strategies to face current challenges in the continent” participants addressed existing conflicts affecting the region, along with their human, political and societal consequences, and the scourge of terrorism which presents a threat to the population and the democratic gains made in a number of countries. The commitment of social democracy to remove the causes of conflict by securing rights and freedoms for all citizens throughout the region and the determination of our movement to see an end to terror were underlined in the discussions. Considered of key importance were the sharing of intelligence and special training for the security forces to deal with the new threats that have to be faced by the countries in the region. Solidarity and mutual support, which are the trademark of our movement, was seen as strategic in securing peace.

During the course of the working sessions, participants from Angola, Benin, Botswana, Burkina Faso, Chad, DR Congo, Equatorial Guinea, Gambia, Ghana, Kenya, Lesotho, Mali, Morocco, Namibia, Niger, Senegal, Somaliland, South Africa, Togo and Western Sahara had the opportunity to share information on the national situation prevailing in their respective countries, on the challenges they faced and on the work and objectives of their parties.

In a special closing ceremony, the meeting was addressed by the President of the Republic of Ghana, His Excellency John Dramani Mahama, who highlighted the key social democratic objectives at the heart of the NDC campaign for the forthcoming general elections due in December 2016. Investment in people, jobs, education, healthcare, and in the infrastructure of the country to create opportunities and a better life for all Ghanaians, were central to their programme. He thanked the Socialist International for its presence in Ghana and for its solidarity.

All participants were unanimous in expressing their deep appreciation to the NDC for their hospitality in hosting this meeting and their optimism that the party would do well in the forthcoming presidential and parliamentary elections.

The following accords were reached:

In conclusion, Socialist International will continue to work together to contribute to the resolution of conflicts and the current challenges to peace and security confronting the continent.

The NDC of Ghana, the host party, was accorded warm appreciation for hosting this meeting of the Africa Committee in Accra. Members expressed optimism that the NDC would win the upcoming December 2016 general elections and will continue in office to serve the people of Ghana, Africa, and to continue its active role in the Socialist International.