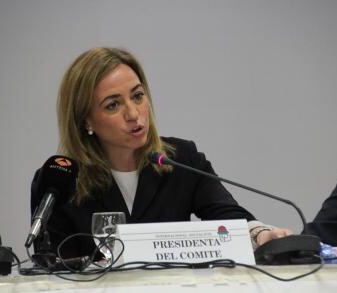 The entire global family of the Socialist International has been deeply moved and saddened by the death yesterday, 9 April, of Carme Chacón, former Minister of Defence of Spain, former International Secretary of the SI member Spanish Socialist Workers’ Party, PSOE, and Chair of the SI Mediterranean Committee.

Born in Catalonia, Carme first became a member of the PSC and PSOE while a law student, going on to be elected as local official in her hometown of Esplugues de Llobregat and later became a member of parliament for Barcelona for five terms, from 2000 to 2016 and Vice-President of the Congress of Deputies. In the government of José Luis Rodríguez Zapatero she was appointed Minister of Housing in 2007 and one year later, while seven months pregnant, became the first woman in the country to assume the post of Minister of Defence.  In 2012, she also became the first woman to stand for the post of Secretary General of the PSOE, which she narrowly lost. Between 2014 and 2016 she was the Secretary for International Relations of the PSOE, became Chair of the Socialist International Mediterranean Committee and participated actively in the work of the International in its different bodies. During her time as Chair of the Committee, meetings were hosted in different venues in Spain as equally a special mission to examine the situation of Western Sahara was organised by the International, whose report was presented to the SI Council meeting held at the United Nations in New York in 2015.

Carme had suffered from a heart condition since her birth, and although she was constantly aware of her fragility and the need to lead a quiet life, it did not stop her from dedicating herself to politics with passion and commitment in favour of the socialist values and ideals she believed in, or from becoming a dedicated mother.

Carme Chacón will be sorely missed by her Spanish comrades and friends and by all those in the SI who knew her. The Socialist International pays tribute to her life and work and extends its deepest condolences to her family and comrades at this sad time. Her example will stand as a lasting legacy for others.