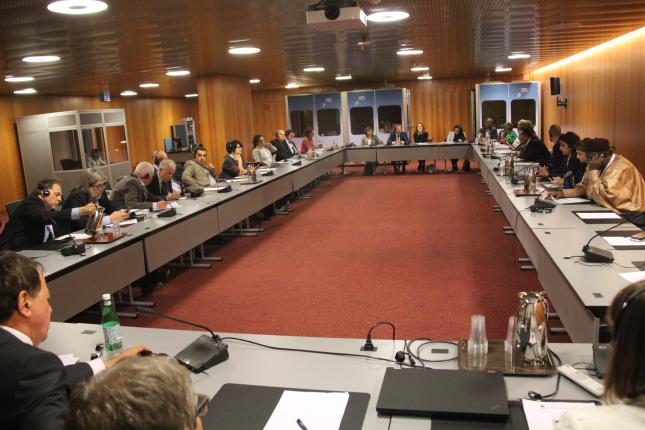 An SI meeting during the 139th Assembly of the Inter-Parliamentary Union in Geneva was held on Monday 15 October 2018, providing a platform for parliamentarians from SI member parties attending the Assembly to exchange views on issues figuring on the agenda of this assembly of the IPU and to share information both on their national situations and on issues of particular concern. Chaired by the SI Secretary General, the meeting was attended by parliamentarians from SI parties in Algeria, Andorra, Angola, Burkina Faso, Chile, Dominican Republic, Finland, France, Guinea Bissau, Hungary, Iraq, Italy, Mali, Mexico, Mongolia, Niger, Palestine, Portugal, Romania, Serbia, Spain, Switzerland, United Kingdom, Venezuela, and a representative from the Global Fund.

From the opening remarks, a recurrent thread in the discussions was the need to reaffirm the values and principles of social democracy, faced with the current surge in nationalism, populism and the ultra-right, the undermining of democracy in different countries around the world, and the threats to peace. This was perceived as an age of uncertainty driving citizens towards the right, to which the left’s response was crucial. Climate change was highlighted as a challenge to every form of human life and required answers too. It was necessary for parties of the left to join forces and be the leaders on this question, as on the defence of human rights.

In advance of the vote by the IPU Assembly on the emergency item, participants engaged in exchanges on the items that had been presented for adoption. There were expressions of concern and solidarity regarding the situation in Venezuela and its dire effects on the Venezuelan people; regarding the plight of Palestinian refugees following the US’s decision to cancel aid to UNRWA; and in regard to the search for peace in the Sahel region, where the countries and their peoples faced terrorism, destabilisation and the consequences of migration. It was also noted in this context how closely inter-related were the fates of Africa and Europe, as the success of terrorism in one could directly affect stability in the other. The meeting reiterated an appeal for solidarity with the Sahel, most of the governments of which were headed by members of the SI.

There was broad support for the UN’s Global Compact on Migration due to be formally adopted in December. Participants underlined the need to unite in fighting racism and xenophobia, and the fact that migration was a global phenomenon which today affected not just one country or region but all of them across the globe, as could be seen throughout Latin America, Africa, Europe, the Middle East and Asia. A deepening of solidarity was required, as well as a focus on the root causes which needed addressing. Among the root causes cited were failed states such as Haiti, Venezuela or Libya, conflicts such as in Yemen, the dire situation affecting the Palestinian people, the increase in terrorism and massive economic hardship. The migration phenomenon was perceived as a common challenge which required joint solutions, recognising the rights and needs of migrants, including refugees and internally displaced persons. The role of the SI was seen as important to express a common position globally and to highlight the humanitarian response.

During the session, participants had the opportunity to raise latest developments and matters of concern within their respective parties, countries or regions. There were many expressions of appreciation of the SI for the support extended to their parties and gratitude for such meetings which were so important in enabling them to share views and experiences with other members of the SI family.

Concluding the meeting, the SI Secretary General spoke of the need to focus on the issues that really matter today. We needed to underscore the values of social democracy, the unqualified principle that “We are the left”, and that we stand for solidarity, equality and justice. This was crucial to counter the prevailing tide of egoism and self-interest, and to preserve our democracies and prioritise the needs and interests of the people.