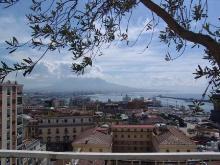 The Socialist International Mediterranean Committee met in Naples on 4-5 May 2007, with the participation of representatives and delegates from close to thirty parties and organisations from throughout the Mediterranean region and beyond, with a special focus on the issues of ‘Politics and Religion’ and ‘Economic Cooperation within the region’. (List of participants)

The meeting, hosted by the SI member parties in Italy, the Democrats of the Left (DS) and the Italian Democratic Socialists (SDI), was addressed at its opening by Antonio Bassolino, President of the region of Campania which includes the city of Naples, by the SI Secretary General Luis Ayala, and by the leaders of the two SI member parties, Enrico Boselli (SDI) and Piero Fassino (DS).

Among the first issues addressed by the Committee was the decision of its members to appoint a new Committee Chair, a responsibility which was accorded unanimously to Elena Valenciano, the International Secretary of the Spanish Socialist Party, PSOE.

At the beginning of the debates on the main themes, Ugo Intini, Vice-Minister of Foreign Affairs of Italy, also addressed the Committee. The theme of ‘Politics and Religion’ was introduced by Emanuele Fiano, MP, from the DS Italy; Nouzha Chekrouni, Minister for Moroccans Abroad, from the USFP of Morocco, and Senator Giorgio Tonini from the DS, Italy. The current relevance of the subject in the region and beyond became evident in the very many contributions made to the discussions by different representatives from various cultural backgrounds and sensitivities, all of whom underlined the need to deepen understanding between cultures, the respect for religion, the importance of advancing and consolidating democratic achievements, the crucial role of tolerance, of ensuring greater inclusion, and restating the need to preserve the respective dimensions of religion and of the state, each in their own right, as a guarantee for freedom.

The discussions on the second main theme, ‘Economic Cooperation in the region’, introduced by Umberto Ranieri, Chair of the Foreign Affairs Commission of the Italian Parliament, provided a good opportunity to review the priorities ahead on the path marked out almost twelve years ago in the Barcelona Declaration. This cooperation is viewed as central today in the agenda to overcome economic and social inequalities which have become more acute and accentuated by the process of globalisation. The shared responsibility of the countries on both shores of the Mediterranean to fight poverty, unemployment and to open up opportunities for all was emphasised, as was the importance of persevering in broadening economic cooperation, trade, initiatives for integration and the legal framework to encourage new investments.

The item on the agenda, ‘Reports on national situations in countries of the region’, highlighted, during the discussion on latest developments, the role of the Socialist International today in providing a very unique forum for political representatives ranging from the Greek and Turkish communities of Cyprus, to Israeli, Palestinian and Lebanese delegates.

At the conclusion of its debates, the Committee agreed unanimously on a Declaration of Naples, a document which summarises the points of view, proposals and priorities of the social democratic movement with regard to the Mediterranean region. The next meeting of the Committee will take place in Greece in the second half of the year.