XXIII Congress of the Socialist International, Athens
Global Solidarity: The courage to make a difference 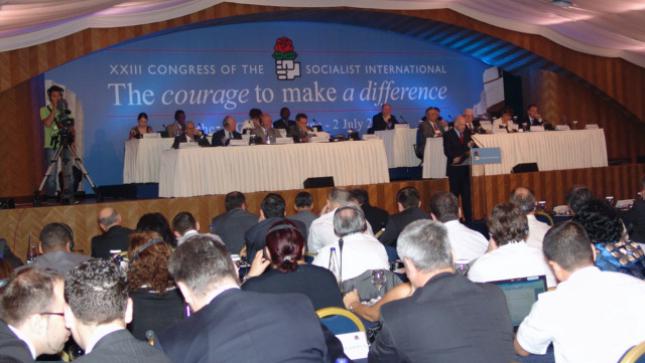 Latifa Perry
The Socialist International held its XXIII Congress in Athens, Greece from 30 June to 2 July with close to 700 participants from 150 parties and organisations from 120 countries attending. (List of participants)

With the theme Global Solidarity: The courage to make a difference, the Congress, the highest decision-making body of the organisation, adopted statements on each of the four key issues under discussion: climate change, peace and the resolution of conflicts, the world economy, including the current food crisis and the question of migration. 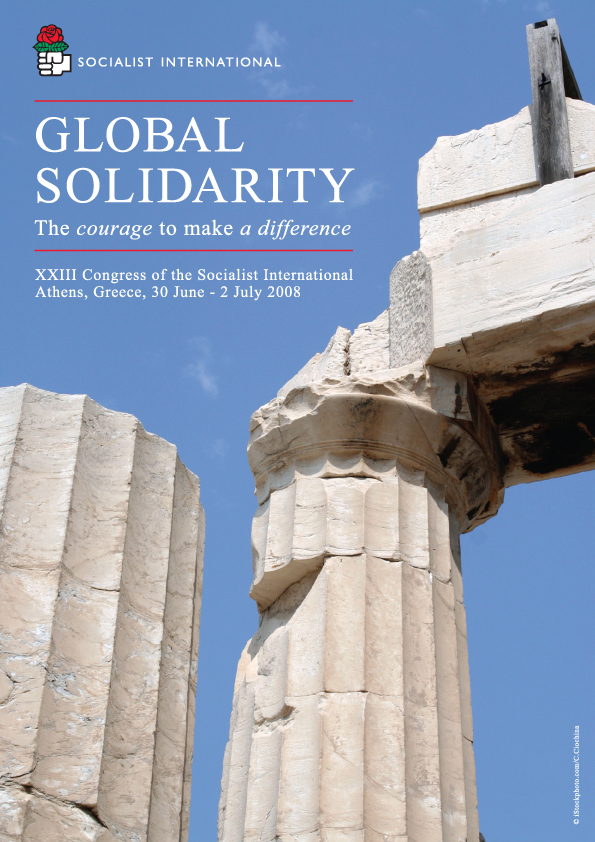 The morning session continued with discussions on the first main theme ACTING NOW ON CLIMATE CHANGE: To achieve a sustainable world society introduced by Co-Chairs of the Socialist International Commission for a Sustainable World Society, Ricardo Lagos, former President of Chile and a Special Envoy of the United Nations Secretary-General on climate change and Goran Persson, former Prime Minister of Sweden. They were followed by wide-ranging contributions from members of the Commission, leaders and party representatives from different regions of the world, including the Chancellor of Austria, Alfred Gusenbauer. (Speakers on climate change)

The climate change debate also included two panel discussions, the first How to arrive successfully at a post-2012 regime? and the second How do we strengthen the multilateral architecture for a sustainable future? featuring speakers from the Spain, India, the United States, Russia and China.

Continuing its efforts to provide a platform to advance peace, the International brought together key actors from the Middle East, Lebanon, Asia and the Balkans for the discussions on the second day of the Congress - WORKING FOR A WORLD IN PEACE: To resolve conflicts and overcome instability.

Introduced by the leader of the Swedish Social Democratic Party, Mona Sahlin, keynote speakers in this debate from the Middle East included the President of the Palestinian National Authority, H.E. Mahmoud Abbas, leader of Fatah; the Israeli Minister of Defence, Ehud Barak, leader of the Israeli Labour Party; Yossi Beilin, Member of the Knesset, Meretz -Yachad, Israel; the leader of the Palestinian Initiative, PNI, Mustafa Barghouti; Mohamed Abdellah of the National Democratic Party, NDP, Egypt, and contributions were heard from the Co-Chairs of the SI Middle East Committee, Jonas Gahr Store, Minister of Foreign Affairs, Norwegian Labour Party, DNA, and Piero Fassino, National Secretary of Democrats of the Left, DS, Italy.

Speaking on the way forward for peace, the President of Iraq H.E. Jalal Talabani, leader of the Patriotic Union of Kurdistan, PUK, addressed the Congress on the challenges for his country, as did  the leader of the Progressive Socialist Party, PSP, of Lebanon, Walid Jumblatt, and Co-Chair of the Pakistan People’s Party, Asif Ali Zardari.

The panel discussion under this second main theme, Struggling for democracy to eradicate national conflict, addressed the concerns for peoples around the world where a lack of democracy is leading to repression, and included contributions by participants from Cameroon, Burma, Yemen and Venezuela who shared their experiences.

SETTING THE GLOBAL ECONOMY ON A NEW PATH: To bring growth and development with opportunities for all, was the third theme of the Congress with keynote speeches from the Prime Minister of Hungary, Ferenc Gyurcszany, and leader of the Hungarian Socialist Party, MSzP; the Chair of the SI Committee on the Economy, Social Cohesion and the Environment, Christoph Zopel, Social Democratic Party, SPD, Germany; Chantal Kambiwa of the Social Democratic Front of Cameroon; the President of the DS, Italy, Massimo D’Alema;  the leader of the Czech Social Democratic Party, CSSD, Jiri Paroubek; the President of the Labour Party, Ireland, Michael Higgins; and, the President of the Dominican Revolutionary Party, PRD, Dominican Republic, Ramon Alburquerque. (Speakers on the global economy)

A debate followed on the issue of food shortages and hike in prices, under the title Dealing with the food crisis: the long-term view, with panellists from Haiti, India, Australia and Senegal.

Lastly, the Congress tackled the impact of migration globally, with the theme GIVING MIGRATION A HUMAN FACE: To build a new migration agenda placing people first, introduced by the Chair of the SI Committee on Migrations, Amalia Garcia, Governor of the State of Zacatecas, Party of Democratic Revolution, PRD, Mexico, on the Committee’s work dealing with the issues arising due to this phenomenon in all regions around the world. Also taking part in this debate were  Nouzha Chekrouni, Socialist Union of Popular Forces, USFP, Morocco, former Minister for Moroccans Abroad, Juan Fernando Lopez Aguilar, former minister of Justice, PSOE, Spain; and Sigfrido Reyes, Member of Parliament, FMLN, El Salvador, amongst others. (Speakers on migration)

The XXIII Congress admitted new member parties, bringing the total membership to 170 parties and organisations, and elected the authorities of the International for the next inter-Congress period. Some leading figures from the International were elected to join the Honorary Presidents and the Congress displayed its solidarity with the cause of the Burmese people, with the election of their leader Aung San Suu Kyi a Special Honorary President. President George Papandreou (Greece) and Secretary General Luis Ayala (Chile) were re-elected, and thirty-seven Vice-Presidents reflecting the statutory regional and gender requirements of the organisation will now form, together with the President and Secretary General, the Presidium of the International. A report was also received from the Secretary General on the organisation’s activities since the previous Congress.