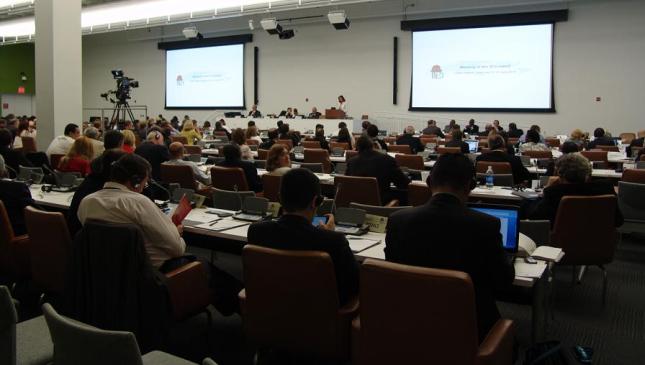 The Council of the Socialist International met in New York at the United Nations Headquarters on Monday 21 and Tuesday 22 June.

It addressed four main issues and priorities of the social democratic movement in its agenda: the Global Economy in the run-up to the G8 and G20 Summits in Toronto, peace in the Middle East, working for an international unified response to Climate Change; and recent developments in the field of Disarmament and Non-proliferation. (List of Speakers)

The Council was preceded on Saturday 19 June by a meeting of the SI Commission on Global Financial Issues to prepare the proposal on the first theme of the Council agenda, the World Economy. On Sunday 20 June, meetings were also were held of the organisation’s Finance and Ethics Committees, and, as customary on the eve of the Council, a meeting of its Presidium.

The plenary session of the world Council, which took place at the headquarters of the United Nations, was attended by over three hundred leaders and representatives from approximately one hundred parties and organisations from all continents and regions of the world. The meeting was formally opened with remarks by the Secretary General Luis Ayala, who referred to the work of the organisation on the themes to be discussed; a speech by President George Papandreou on the World Economy, in which he also conveyed his vision and perspective as a Head of Government; and a contribution by the Secretary General of the Organisation of American States, OAS, José Miguel Insulza, who presented a hemispheric view on the main theme of the agenda.

The social democratic leaders gathered in New York, through numerous contributions and speeches, debated in depth the state of the World Economy and agreed on a course of action in this regard, reflected in a statement presented by Eero Heinäluoma of the SDP Finland as Rapporteur of the Commission on Global Financial Issues, which maintains that what is needed today is a well-coordinated economic policy between the world's major economies, financial reform, new counter-cyclical capital requirements and more global governance.

A declaration on the challenges of global development in 2010 presented by the SI Committee on Economic Policy, Labour and National Resources was also approved by the Council.

The current situation in the Middle East was addressed by the Council on the first day in a frank and open debate with contributions from representatives of the SI Israeli member parties, Ehud Barak, Leader of the Labour Party and Defence Minister and Avshalom Vilan, member of the Knesset from Meretz, and from representatives of the SI Palestinian member parties, Husam Zomlot of Fatah and Mustafa Barghouti of the Palestinian National Initiative, as well as from participants from other parties. Following intensive consultations with the Israeli and Palestinian delegations during the two days of the meeting, a statement on the Middle East was presented and adopted by acclamation.

The Council, with its sights on the forthcoming COP16 meeting in Cancún later this year, also approved a declaration on the issue of Climate Change. The matters of disarmament and non-proliferation were equally addressed by the Council leading to the approval of two declarations, one on A World Without Nuclear Weapons and the other on a Comprehensive Arms Trade Treaty.

The Report of the SI Mission which visited Venezuela earlier this year was presented to the Council by two members of the Mission, Renée Fregosi of the PS, France, and Jesús Rodríguez, Secretary General of the UCR of Argentina.

The reports and recommendations of both the Finance and Ethics Committees were approved by the Council.

The Council agreed that its next meeting will be held in Paris on 15-16 November, hosted by the French Socialist Party.

SG Report to the Council