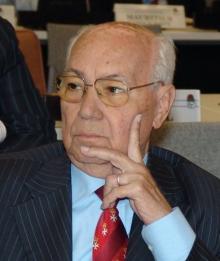 Born in the southern Angolan province of Benguela, Paulo Jorge studied chemical engineering at University before he joined the MPLA in 1956, participating in clandestine activities and becoming known in Angola and beyond as an outstanding combatant in the struggle for freedom, sovereignty and democracy.

Respected for his honesty, principles and diplomacy, Paulo Jorge was chosen to lead the talks with Portugal for the independence of Angola and was one of the architects of the Alvor Accords which were signed in 1975. Following independence, he continued service to his country, first as Secretary to the President of the Republic for Foreign Affairs, later assuming the post of Foreign Minister. Paulo Jorge continued serving in the field of international relations until the time of his death when he was Secretary for International Relations of the MPLA as well a Member of Parliament.

Paulo Jorge’s unwavering dedication to his country and its people, to his party, to the ideals of freedom, cooperation between nations, and to peace, for which he so valiantly fought throughout his long life is saluted today by the Socialist International. His passing is a loss both for Angola and for the International.

Since the MPLA joined the ranks of the Socialist International in 1996, first as an observer member and since 2003 as a full member party, Paulo Jorge was a regular and committed presence in its activities, promoting and defending the values and the progressive politics shared in the global political family to which he belonged.

His dignity, sense of camaraderie, friendship and humour will be sorely missed by all his friends and colleagues within the Socialist International. May he rest in peace.

The funeral of Paulo Jorge took place on Thursday 1 July in a period of national mourning decreed by the government of the Republic of Angola. Following a wake held at the National Assembly with the authorities of the country, members of Parliament and leaders and members from the MPLA, the funeral was held in the Santa Ana cemetery in the city of Luanda. Present were the President of the Republic and President of the MPLA, Jose Eduardo dos Santos, the Vice-President of the Republic, the President of the National Assembly, the Presidents of the Supreme and Constitutional Courts and Court of Auditors, Ministers of State, Members of the Council of the Republic, Leaders and Parliamentarians from all the Angolan parties, amongst them the Secretary General of the MPLA, Julião Mateus Paulo, leaders and representatives of civil society, the organisations of women and youth of the MPLA along with a great number of Angolan citizens. Foreign delegations present included the Secretary General of the Socialist International, the Secretaries General and other leaders of the SWAPO of Namibia and the FRELIMO of Mozambique, members of the leadership of the ANC of South Africa, and leaders of the PAICV of Cape Verde, the PAIGC of Guinea-Bissau, the MLSTP/PSD of Sao Tome & Principe and the NDC of Ghana.

A large event attended by thousands of Angolan citizens was later held in a stadium in the capital in honour and in memory of Paulo Jorge, where foreign representatives together with Angolan politicians, intellectuals, artists and other personalities addressed the participants.