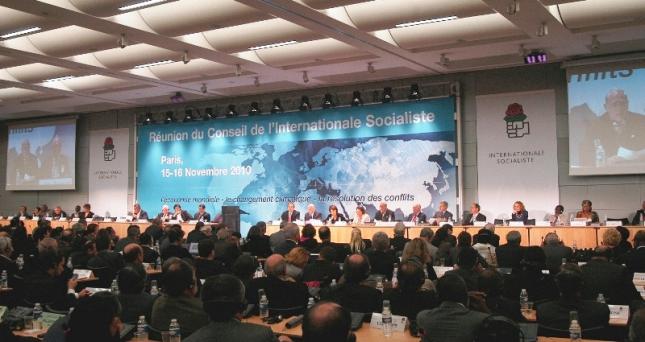 On 15-16 November, the second Council of the Socialist International of 2010 took place in Paris with the participation of over 400 delegates from all regions of the world, who were warmly welcomed by the Socialist Party of France (PS). The meeting, held at the headquarters of the Organisation for Economic Co-operation and Development, OECD, brought together representatives of 115 political parties and organisations. (List of participants)

The Council discussions focused on three main themes:  (1) The World Economy: mapping out a sustainable recovery that works for all; (2) Facing the Consequences of Climate Change: The urgent need for a meaningful agreement at COP16; and (3) Overcoming Conflict: Strengthening democracy and security.

At the opening of the meeting, following remarks by the SI Secretary General Luis Ayala on the work of the International and of the Council in Paris, the OECD Secretary General Angel Gurría addressed participants (text), outlining policies of his organisation, in particular in relation to the themes on the agenda. Martine Aubry, First Secretary of the PS, made an opening address on behalf of her party, in which she referred to the longstanding relationship between the International and the socialist movement in France, and presented the position of the PS on current challenges, both domestic and global, faced by socialists everywhere. The President of the Socialist International, George Papandreou, in his opening speech, thanked all those who had expressed congratulations for the victory of PASOK in local and regional elections concluded on the previous night in his country, and put forward his views on different issues of concern to the socialist movement on the global political agenda.

In the first main theme, delegates discussed latest developments affecting the world economy, including the G20 Seoul Summit and its outcome, with particular emphasis on social democratic priorities in regard to a sustainable recovery, employment and growth, poverty reduction and climate financing, calling for constructive cooperation and coordination between nations to tackle the imbalances in the world economy.

These and other proposals were later reflected in a statement, which was approved after the conclusion of an extensive, far-reaching debate with the participation of delegates from both developed and developing economies. These discussions began with the contribution of SI Vice-President from France Ségolène Royal, followed by Prime Minister Milo Djukanovic of Montenegro, members of the SI Commission on Global Financial Issues from different continents, SI Vice-Presidents and party leaders from various regions of the world, including PES President Poul Nyrup Rasmussen, and among the guests, Vice-Minister Jieyi Liu of China. SI Vice-President Eero Heinäluoma, Rapporteur of the Commission, later presented the conclusions of the debate. (List of speakers) The Council also approved a document on Global Welfare Statehood prepared by the SI Committee on Economic Policy, Labour and National Resources, chaired by Christoph Zopel (SPD Germany), which had met on the eve of the Council.

At the end of the first session of the Council on the morning of 15 November, former President of the Socialist International Pierre Mauroy from France, today an Honorary President of the SI, presented his thoughts on the tasks facing socialism today in a much appreciated address.

On the second main theme of climate change, the Council heard a keynote speech from Ricardo Lagos, a Special Envoy of the UN Secretary General on Climate Change, former President of Chile and Co-chair of the SI Commission for a Sustainable World Society. Other members of the Commission participating in the debate were South African Minister Nkosazana Dlamini Zuma and Sergei Mironov, President of the Council of Federation of Russia. Mona Sahlin, leader of the Swedish Social Democratic Party, and Mohamed Waheed, Vice-president of the Republic of the Maldives, who participated as a guest to highlight the particular vulnerability of the island states to climate change, were joined in the discussions by Jean-Christophe Cambadélis from the PS, France, and other senior representatives. (List of speakers)

The Council unanimously approved a special appeal, “L'appel de Paris”, directed at the COP16 with ten clear points, insisting on the urgent need for an ambitious and realistic international agreement on climate change with binding commitments and with objectives and deadlines; to define an international financial architecture to fight climate change, including plans for financial compensation, adaptation and mitigation; reducing emissions from deforestation and degradation (REDD); establishing systems for measurement, reporting and verification (MRV) of both commitments made, and actions taken; calling for a deepening of scientific and technological cooperation between developed and developing countries; keeping care for the most vulnerable at the centre of the concerns; not leaving for later that which should be done now; and calling on international institutions, nations, peoples and other political forces to assume their responsibility.

The discussions of the Council on the third main theme, the strengthening of democracy and resolution of conflict, had two keynote speakers, the President of the Republic of Iraq, Jalal Talabani, and the former French Prime Minister Laurent Fabius.

The ability of democracy to change the lives of people for the better, the need to keep in place the principles of representation, dialogue and compromise, and the potential for democracy to resolve conflict, were underlined by speakers. The release of Burmese democracy leader and special SI Honorary President Aung San Suu Kyi, after 15 years of detention was warmly greeted by the Council, as the first step on the road to recovering democracy in Burma. Delegates reaffirmed their strong support to all those fighting for freedom and democracy in that country.

On democracy, challenges and opportunities for SI members parties in current and forthcoming elections in Africa were highlighted, with contributions by leaders of SI member parties in that continent John Fru Ndi (Cameroon, SDF), Ibrahim Boubacar Keita (Mali, RPM) and Ahmed Ould Daddah, (Mauritania, RFD). The Council pointed to the peaceful conduct of the first round of the presidential elections in Cote d'Ivoire, where the SI was present with an observer mission, to the elections in Guinea, where provisional results pointed to the victory of Alpha Condé, leader of SI member party the RPG; to forthcoming elections in Niger, where Mahamadou Issoufou, leader of the PNDS-Tarayya is a presidential candidate and to forthcoming elections in the Central African Republic, calling for respect of the electoral code and more transparency. It was feared that elections in the not too distant future in Cameroon, Mali and Senegal may also be affected by these types of difficulties, and the Council called on the international community to remain engaged in support of democracy in Africa.

Regarding conflicts, the current developments in the Middle East and the urgent need for progress in the latest peace negotiations between Israelis and Palestinians were highlighted. The Council reiterated its statement on the Middle East approved by acclamation at its previous meeting in New York in June, and resolved to continue working in the months ahead with all parties in the region to advance in the search for peace. In regard to recent developments and the tragic loss of life in the Western Saharan city of El Aaiún, the Council gave its support to the Chair of the SI Mediterranean Committee, Elena Valenciano (PSOE, Spain), to work with both SI members – the USFP of Morocco and Polisario of Western Sahara – to build understanding between the parties.

The Council was greatly encouraged by the advances of the SI initiative for peace in the Armenia-Azerbaijan conflict, following meetings of the International held this year in Yerevan and Baku. Representatives from both countries had engaged in unprecedented dialogue in activities of the SI Committee for the CIS, the Caucasus and the Black Sea in both capitals, which contributed to define common principles upon which to approach the Nagorno-Karabakh conflict, included in the statement on the theme of democracy and security which was adopted unanimously by the Council reflecting the different conclusions and views taken on the  issues covered in the debate on the third main theme. (List of speakers)

Other issues highlighted in the discussions which also figure in that statement were: the result of recent elections in Venezuela, where the SI was present in an observer capacity, and where reform appears necessary to secure fair representation, while concerns remain regarding the recognition of future electoral results in light of recent statements by members of the armed forces; the forthcoming presidential elections in Belarus, where unacceptable repression against political opponents is still commonplace; support for social democrats in Kyrgyzstan, where SI member party Ata Meken has contributed to the development of democratic institutions of that country and won representation in parliament and in Kazakhstan, where the All-National Social Democratic Party 'AZAT' continues, with the backing of the SI, in its efforts to officially re-register with the relevant authorities. The Council expressed concern over the consequences of the lack of democracy in Iran, the situation on human rights and the existence of political prisoners, oppression and discrimination against ethnic groups, and development of nuclear capabilities in that country, and addressed the current political and security crises taking place in Yemen, expressing support for the continuation of comprehensive dialogue between the authorities and opposition in that country.

Following a proposal from the SI Committee on Disarmament, which met recently in Moscow under the chairmanship of Rolf Mützenich (SPD, Germany), a resolution on NATO strategy and missile defence was also adopted.

The Council registered its full solidarity with the Union of Haitian Social Democrats and the people of Haiti struggling to overcome a cholera epidemic, still suffering the devastating consequences of both the earthquake of January this year, and cyclone Tomas, which struck in October.

The Council adopted the report and recommendations from the Finance and Administration Committee regarding the finances of the organisation, and unanimously approved the budget for 2011. Following the report of the Ethics Committee, the Council unanimously agreed on consultative membership status in the International for the United Democratic Party of Gambia and for the All-National Social Democratic Party 'AZAT' of Kazakhstan, and the upgrading to consultative membership of A Just Russia Party.