SI in Yemen: working for a transition to a secure, democratic state

Within the context of the SI support for the democratic revolutions in the Arab world, and in advance of the meeting in Istanbul of the SI Special Committee for that region, the Secretary General of the Socialist International visited Yemen following the installation of the new authorities resulting from the sweeping changes in that country after 14 months of civil and popular demands for democracy, freedoms and rights. Meetings were held with the new President of the country, the Prime Minister and other ministers, the leadership and members of the Yemeni Socialist Party (YSP), the SI member in that country, and its partners in the coalition of Joint Meeting Parties, and representatives of the Youth and Change movements.

‘Help us to help ourselves’ 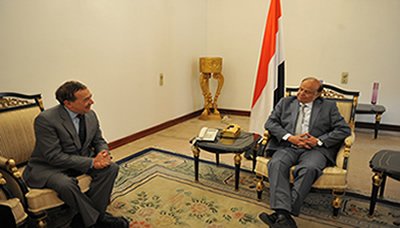 The newly elected President of Yemen, Abd Rabbuh Mansur Al-Hadi, received the SI Secretary General Luis Ayala accompanied by representatives of the YSP, and outlined the huge challenges facing the country, including political, security and economic crises. The country is in a completely new situation, with a consensus found among the democratic actors, but the security and economic issues were still a major obstacle, with much division amongst and between the armed forces, the security forces and armed tribal forces.

Yemen, the president added, needs support from the international community, including the Gulf Cooperation Council, the European Union, the United States, among others, including the Socialist International he said, to help the country to help itself and avoid further violence and instability which would affect the entire region.

In this regard, a great deal of hope was placed upon the “national dialogue”, a series of talks between the different political actors and sectors of society to resolve differences. The SI Secretary General assured President Hadi of the support and solidarity of the social democratic movement in his tasks, wishing him the strength and wisdom to put into place the Yemeni people’s new agenda for change.

During his meeting with the SI Secretary General, Prime Minister Mohammed Basindwa expressed his appreciation for the support for the revolution and transition given by the global social democratic movement. Criticising the continued interference of the former president in political affairs in the country, the Prime Minister stressed his determination to build a civil, democratic state regardless of any obstacles created by remnants of the former regime.

Meetings were held with all seven of the Joint Meeting Parties (JMP), including the YSP and al-Islah, which currently holds the rotating chairmanship of that coalition. The JMP have united as a political force to become the political motor driving the democratic revolution, with one of their most pressing concerns the question of restructuring of the armed forces; the importance of working together across ideological divides in the interest of democracy was strongly emphasised by all representatives of the alliance.

Discussions between the SI Secretary General and the Minister for Legal Affairs Mohammed Mikhlafi centred on his important tasks in the transitional government, and the drafting of the Transitional Justice and National Reconciliation Law, addressing the urgent need to put an end to causes of division amongst members of Yemeni society. It was agreed that legal and political expertise within the SI would be used to contribute to the preparation of the law, crucial for reparation and reconciliation in Yemen.


Recognising the pioneers of change

A special visit was made to the activists in Change Square, the epicentre of the demonstrations against the former regime, meeting members of the YSP youth, who have been behind the popular movement which brought about regime change in Yemen. The activists underlined that they were willing to remain camped in their tents which stretch for many kilometres through the streets of Sana’a until the last representative of the old regime was removed from power. The dedication, courage and sacrifice of these protesters represented the hopes of people in Yemen, declared the SI Secretary General, and real change would be brought to Yemen through democracy and the will of the people.

VIDEO: coverage of the meeting with President Hadi, Yemen TV Channel (in Arabic)

President of Yemen meets Secretary General of the Socialist International, Al-Tagheer (in Arabic)

President of the Republic meets Secretary General of the Socialist International, Saba net (in Arabic)

Secretary General of the Socialist International hails transfer of power in Yemen, Akhbar al-Youm (in Arabic)