SI Presidium meeting at United Nations during the UNGA debates 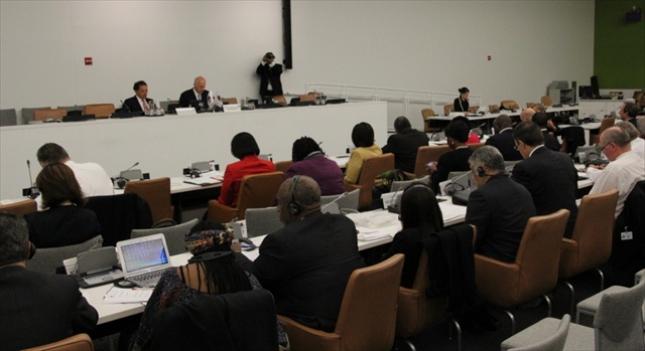 This year’s annual meeting of SI Presidium members at the United Nations in connection with the General Assembly debates was held at the UN Headquarters in New York on Wednesday 26 September. Members of the new Presidium, having been elected only a few weeks before at the XXIV SI Congress held in South Africa, were of the opinion in Cape Town that this initiative implemented in recent years should be maintained despite the short time frame on this occasion, given the opportunity which these meetings have provided both to have a bearing on the main issues of the global agenda being addressed at the United Nations, and for direct exchanges with other SI members in government present in New York at the same time.

The meeting focused on three main issues: Responses to the financial crisis by international institutions, regional organisations, groups of nations and individual countries; Common policies for progressive governments to sustain social and economic priorities in the current financial climate; and Defining priorities and emphases on the global agenda in regard to security, democracy and sustainability.

The work of the International since 2008 on the financial crisis and its different phases was highlighted, particularly the work by the SI’s Commission on Global Financial Issues, the various meetings of the Councils and regional Committees, all of which had addressed this matter. In the contributions on this subject, participants noted that the hoped for change in the financial system, the banking sector and practices linked to the origins of the crisis was yet to be seen and the SI’s position adopted at the Cape Town Congress was strongly reaffirmed and was welcomed by others within the UN system.

Building on the work done by the different SI bodies and reflected in the various statements made since the crisis began, it was considered important at this stage to concentrate in the forthcoming period on our political response to the economic crisis and to work to ensure its implementation. In this regard, there was strong support for the idea of undertaking talks with international financial institutions such as the IMF, the World Bank and regional development banks, among others, and further, to advance our progressive agenda among the leaders, our members and friends within the G20.

It was observed that the world was very different now to what it was only a few years ago, as the crisis had continued evolving, and today the situation in Europe was the most complex, raising fundamental questions about the type of system our societies were built upon, and the need to have one that was productive, that generates employment and equality. It was perceived that we were facing a profound structural crisis and a new thinking was required.

Also noted was that the main economic engines, the US, China and Europe, were in trouble, with Europe suffering most dramatically from the crisis with unemployment and loss of markets threatening further instability. Concern was expressed over the repercussions of the financial crisis in other regions of the world not directly suffering the same economic downturn, such as Latin America and Africa, where there existed social or political insecurities. In the interest of preserving or gaining new democracies, it was said that measures had to be promoted to combat corruption, drug trafficking, mafias and terrorism, as well as programmes for assisting political parties where needed. An agenda focussing on equality was highlighted as a key area of work deserving SI attention in the coming period, and the particular vulnerability of women and youth was again underlined, especially where there existed limited access to education and opportunities.

Participants also highlighted the need to prioritise on the global agenda, the reinforcement of inter-cultural dialogue, the promotion of solidarity and south-south cooperation.

Bringing peace and democracy to areas of conflict was also addressed, notably the situation in the Sahel and in parts of the Arab world. The Socialist International’s traditional strength in handling regional conflicts was highlighted by participants and there was broad support for the SI undertaking initiatives in this sense. As it had been agreed at the Congress, the SI would set up an action group on Syria and would also assume a role in regard to the conflict in Mali, in contact with its member parties there. SI initiatives carried out in conjunction with the United Nations were welcomed on key issues of the global agenda, in the interest of multilateralism as underlined at the Cape Town Congress, including these annual Presidium meetings at the headquarters of the UN in New York in connection with the General Assembly debates.

Meeting in the aftermath of the XXIV SI Congress, members of the Presidium commented on its success and their satisfaction at the democratic and transparent way in which it had been carried out. Acknowledgements were also made to fellow Presidium member H.E. Jacob Zuma, President of South Africa, and to the ANC for their hospitality in hosting the Congress. Keen to build on that success, it was noted that the next SI Council would take place in the first part of 2013, either at the end of January or in February. At that time the various committees and working groups for this inter-congress period would be established and priorities for their work would be outlined.