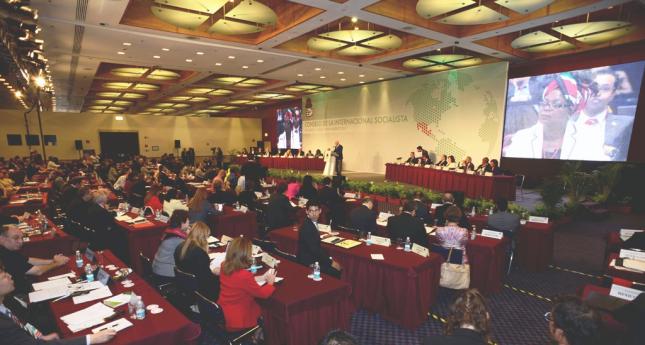 The first Council meeting of the Socialist International of 2014 took place on 30 June-1 July in Mexico City, hosted by the organisation’s two member parties in Mexico, the Institutional Revolutionary Party (PRI) and the Party of the Democratic Revolution (PRD). Leaders and representatives from member parties and organisations gathered to discuss the main themes on the agenda of the Council: “Our priorities in the global economy”, “Our efforts for peace and the resolution of conflicts”, “Our work to strengthen and deepen democracy”, and “Defining an SI Charter for migrants”.

The Secretary General of the Socialist International, Luis Ayala, welcomed participants and thanked both host parties. Opening the meeting, he referred to the presence throughout Mexico’s history of large social movements for justice and freedom. Today our two parties were carrying forward these values, which are shared by and define our global social democratic movement. The meeting was taking place at a time of multiple global challenges – on the economy, democracy, peace in a world of increasing conflicts, and migrations – which the Council would discuss and debate.

Leaders of both host parties delivered introductory speeches at the opening of the meeting and welcomed delegates to Mexico.

César Camacho (PRI) outlined in his address, the virtues of social democracy and the commitment of the PRI to the shared values of the Socialist International, in particular the desire of the government of Mexico to tackle inequality and social injustice. He wished delegates success in their deliberations and work over the two days of the Council and extended a warm and friendly welcome.

In his speech, Jesús Zambrano Grijalva (PRD) referred to the contribution to democracy, stability and governability by the left in Mexico and the goal of a society of rights and social equality. The global left, he added, stood for economic, social and civil rights, in particular women’s rights. He reiterated the sense of belonging felt by the PRD in the great family of the Socialist International.

In his opening address, SI President George Papandreou warmly thanked both host parties for their generous hospitality and committed participation in the work of the SI. His speech focused on the issue of growing inequality against which the global social democratic movement had long struggled. To combat this, he added, global governance was necessary to implement rules and regulations restoring the basis of equity and democracy. He announced that a new SI Commission on Equality would be launched this autumn, bringing this crucial issue to the forefront of the global political debate.

Under the first main theme, delegates presented their perspectives on the priorities of the International in the global economy. A number of keynote speeches were delivered, which provided the framework for the interventions to follow (List of speakers). Four key priorities featured heavily in discussions – tackling inequality, battling corruption and financial deregulation, making positive use of big data and protecting the environment – and formed the framework of a declaration on priorities in the global economy later adopted by the Council. A further statement was also adopted in solidarity with Argentina in relation to the restructuring of that country’s foreign debt.

During the first day of the meeting, delegates attended a lunch hosted by the Mexican Minister of Foreign Affairs, José Antonio Meade Kuribreña. In a speech to participants attending the Council, he reflected on the role of Mexico in world affairs and the efforts of the government of President Peña Nieto for peace, inclusiveness, education and prosperity. That evening Council participants visited the Academy of San Carlos, where they were hosted and addressed by José Narro Robles, Rector of the largest university in Mexico, the Universidad Nacional Autónoma de México (UNAM).

Contributions to the discussion on the second main theme, “Our efforts for peace and the resolution of conflicts” highlighted the many active conflicts in the world in need of decisive action to bring an end to the death and suffering we are witnessing along with political instability in different regions of the world. A number of speakers conveyed their alarm and condemnation at recent events in Iraq, where widespread acts of terror threaten the very integrity of the state. A declaration on the insurgency in Iraq rejected the creation of an Islamic caliphate and called for a government of national unity with the representation of all the diverse groups within Iraqi society, recognising that the freedoms of all need to be respected. It expressed the solidarity of the SI with its member party in Iraq, the PUK, and with the Kurdish people who are in the front line of the battle against extremist insurgency, urging that the Kurdish people be granted their rightful voice in any discussions on the future of Iraq.

Contributions were also heard from the SI member parties in Ukraine and Russian Federation on the ongoing crisis, underscoring the role played by the SI as a forum for constructive discussions. It was agreed that the SI Committee for the CIS, the Caucasus and the Black Sea would return to the examination of this subject in a meeting to be convened shortly.

The Secretary General announced that preparations were underway, in contact with the Sudan Peoples’ Liberation Movement/Army (SPLM/SPLA) government and the Sudan Peoples’ Liberation Movement/Army in Opposition (SPLM/A-IO), and representatives of the Ethiopian government who had been heading talks between both, for the visit of an SI delegation to South Sudan to encourage both sides to end hostilities, which are in danger of escalation, leading to further violence and famine. Equally, he reported on contacts made with the President of the Central African Republic, and other political actors in that country, for a Mission of the Socialist International to CAR to engage in discussions on how to contribute to the end of that conflict.

Regarding Western Sahara, the Council recalled the Council resolution on this issue adopted in Cascais, Portugal, and endorsed the proposal of the Secretary General that the mission to the region previously agreed by the SI Mediterranean Committee would be carried out as early as possible and report to the next Council meeting. Should that prove difficult within the timeframe between now and the next Council, then the SI President and Secretary General would undertake such a visit.

A further resolution in support of the peace process in Colombia was adopted by the Council.

The work of the Socialist International on democracy has been a fundamental pillar of the organisation throughout its existence. Contributions on the main theme of “Our work to strengthen and deepen democracy” (List of speakers) recognised the historical contribution of the SI in this regard and reflected the deep belief by all its member parties in the need for effective, accountable and functioning democracies. Delegates spoke on democratic successes achieved by SI member parties working in difficult conditions, but also on the severe challenges to democracy faced by many social democrats in countries such as Mauritania, whose leader was a key-note speaker on this subject. Nowhere is the need for true democracy more keenly felt than in the Arab world, and this was reflected in a declaration adopted by the Council.

In regard to the current situation in Venezuela, the Council endorsed the resolution on Venezuela adopted by the Committee for Latin America and the Caribbean at its recent meeting in the Dominican Republic.

A declaration on Puerto Rico was also adopted by the Council.

The issue of migrations was the next item on the agenda, and specifically the definition of an SI charter for migrants, a task which the International had undertaken. The subject was introduced by the chair of the SI Migrations Committee, Habib el Malki (Morocco, USFP) who reported on the discussions held at its recent meeting in Tangiers. Further contributions were heard by delegates (List of speakers) from countries where the question of migration is particularly significant, such as Mexico and Guatemala, who presented their proposals for key elements that would make up the SI charter and other urgent aspects affecting migrants in their countries.

At the conclusion of the discussions on migrations, the Council adopted a declaration on family reunification, treating the tragic cases of migrant children from Mexico and Central America who have been separated from their families.

The chair of the SI Ethics Committee, Gilles Mahieu (Belgium, PS), reported on the decisions on admission of new members and changes in membership status proposed by the committee. The Council accepted the proposal that the Republican Turkish Party (CTP), Cyprus be upgraded to full membership of the SI. Equally, the Council accepted the proposal for the reinstatement of consultative status for the Social Democratic Party of Azerbaijan (SDPA). Of the new applications for membership, the Council accepted the recommendation of the Ethics Committee to grant consultative status to the People’s United Party (PUP) of Belize, the Botswana Democratic Party (BDP), and the People’s Harmony Party of Latvia. The Committee’s proposal for observer status was accepted by the Council for the National Union for the Development and Renewal (UNDR) of Chad, the Lesotho Congress for Democracy (LCD) and the Swazi Democratic Party (SWADEPA). All decisions are due to be ratified by the next congress, in accordance with the statutes. The Committee would continue its examination of the many other applications for membership which are outstanding and agreed to re-convene for a one-day meeting in London in the autumn of this year.

Maurice Poler, co-chair of the Finance and Administration Committee, SIFAC, (Venezuela, AD) reported on the current financial position of the organisation, the audited accounts for 2013 and the discussions and decisions of the Committee. Proposals were made for sanctions to be taken against member parties with outstanding membership fees. Parties that have not paid membership fees for three or more years due to financial difficulties will be given the opportunity to enter into a payment agreement. Those that do not make this commitment will be informed that they will cease to be members of the Socialist International at the next Council meeting. The report of the committee was accepted by the Council, which also adopted the audited accounts of the SI for 2013.

The Secretary General, reporting briefly on the activities of the organisation since the last Council meeting in Istanbul, said that despite the financial constraints of the past year due to the late or non-payment of membership fees, the International had managed to continue with an intense programme of activities thanks to the enthusiasm and commitment of so many in our movement. This had been reflected in different parts of the world where the SI has been present, in the regional meetings of our International, in our presence in places of conflict, at meetings of our member parties, in our thematic and statutory committees, meetings of parliamentarians, election observation, and other initiatives organised by our International. Close to thirty different activities had been carried out globally since our last Council, following on from the sixty carried out during the previous year.

Concluding the meeting, the President thanked all delegates for their constructive participation and the common agreements reached. The SI was well placed, as our history has shown, to bring parties together and create dialogue where others couldn’t because we share common values. He recalled the words of the rector of UNAM the day before, in that our generation, both the young and the old, have an enormous responsibility to humanity because the challenges we face today have no historical precedence. Paradoxically, we have the means, resources, know-how and human capacity to resolve these problems but it required political decisions and practicing real democracy. This depended on all of us individually and collectively and in the SI we are committed to continue working together to achieve our shared goals. On behalf of all participants, he sincerely thanked the host parties for their warm welcome and for providing the conditions for an excellent meeting.