Meeting of the SI Committee on Migrations, Catania, Italy 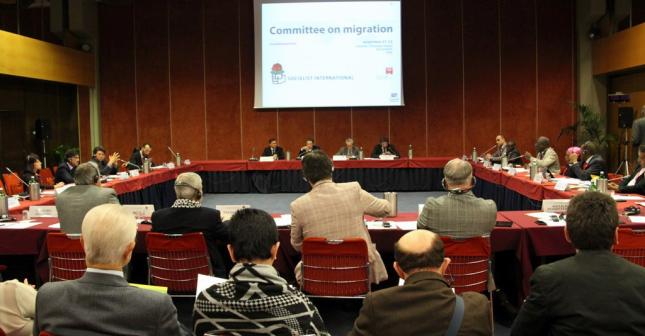 The meeting was chaired by the leader of the Italian Socialist MPs, Marco Di Lello, with the participation of SI Secretary General Luis Ayala and delegates from socialist and progressive parties from Algeria, Angola, Bulgaria, Greece, Iraq, Italy, Mali, Mexico, Morocco, Niger, Palestine, Russia and Spain. As an invited guest, Italian MP from the Democratic Party, Gennaro Migliore, candidate to the presidency of the Investigative Parliamentary Committee for the system of identification and admission of migrants, also took part in the meeting.

The Committee agreed on guidelines to shape the Charter for Migrants that the Socialist International will adopt during 2015 to provide a common platform for socialists from both the north and south of the world, amongst which are:

- the importance that migration has always played in building open societies and producing useful exchanges on the economy by the countries involved. It is unacceptable that the globalisation of the markets and goods is not accompanied by a globalised consolidation of rights.

- a migrant is first and foremost a person who has the right to be recognized with dignity. It is therefore unacceptable to consider migrants only as a tool for economic improvement. Migrants should be able to have access to education and healthcare, and to the basic rights that are essential in any democracy.

- Migrants should always have the same working conditions as the native population. Migrants cannot be exploited, in the same way, they cannot be used for unfair competition against the local workforce. We should combat against the criminal traffic of migrants.

- The respect between migrants and the population of the host countries must be mutual, it is respect for diversity, which is an absolute value and that goes both ways; in this framework, religious fundamentalism and nationalism are perverse factors that not only work against peace between peoples but also destabilize societies from within, and migrants are particularly exposed to the dangers caused by these ideologies;

- It is also evident that respect for diversity cannot inhibit the extension and strengthening of the rights that we consider universal and valid in every culture, in every country and in every age, starting with the rights of women and children; and democratic institutions must ensure the autonomy of individual freedom of expression, be it religious or secular.

- Economic and political cooperation between migrant, transit and immigrant countries is an essential factor, as migration requires a common governance.

- Freedom is for us an indisputable criteria: if migration can and should be put under rules and controls, the right of asylum must always be considered a fundamental right.

The Socialist International has always had peace and political, social and economic equality as essential goals: the solution to crises and wars, economic development and the protection of the environment are all incontestable factors in facing the problems arising from migrations. At the same time, we underline the opportunities created by migration in terms of exchanges, mutual knowledge, openness of society and increasing awareness. We reiterate our belief that we all live in one world.

The Socialist International expresses its appreciation for the courageous decision of President Obama regarding migrants in the United States of America.

Finally, the Committee recognises the efforts of the Italian authorities, and especially those of local authorities and citizens in Sicily, in handling humanely the increasing flow of migrants through the Mediterranean. In order to avoid dangerous “journeys of hope”, controls could and should be put in place at the place of origin of the migration and not at the country of arrival.
_________________