Meeting of the SI Committee for Latin America and the Caribbean at the OAS, Washington DC 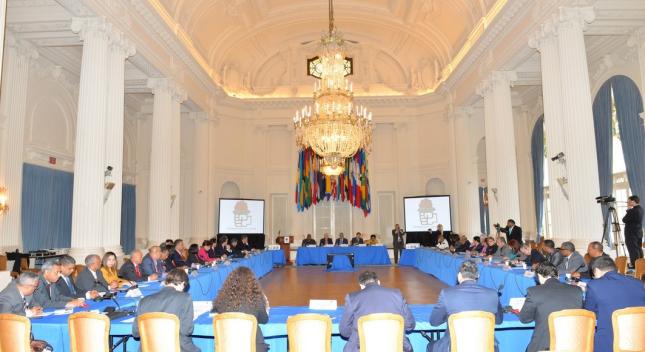 Patricia Leiva, OEA
The Socialist International Committee for Latin America and the Caribbean met in the headquarters of the Organisation of American States (OAS) in Washington DC, on 1-2 December 2014.

At the opening of the meeting, OAS Secretary General, José Miguel Insulza, welcomed the participants and the presence of the regional member parties of the Socialist International in the Hall of the Americas. He highlighted the full validity of the principles of the Socialist International, which promote the creation of societies with greater social inclusion, democracy and respect for human rights. He recalled that the OAS as well as the SI are institutions with a long history, but their current history began in the post-war era, one in 1948 and the other in 1951. He also said as an example, that the current issues of concern for the OAS and the SI “are not that different”, pointing out that the aims of both organisations are to achieve more equal societies. “Like the International, the OAS shares the objectives of an inclusive society with more solidarity, and encourages policies to support growth with employment and greater equality. The OAS looks to strengthening and deepening democracy and promotes the existence of open and transparent governments closer to their citizens”, he stressed. Finally, Secretary General Insulza recalled that he has supported the cause of socialism since his youth and reaffirmed the validity of these ideas when facing the current challenges in the region and in the world.

Also addressing the meeting during the opening, the Chair of the Committee, Miguel Vargas Maldonado (PRD, Dominican Republic), reviewed the themes to be discussed during the two days and presented his views on them. Vargas pointed out that the main challenge faced by the region in the current scenario of a slowing-down of the economy, is not only how to recover the pace of growth but how to achieve better growth, that is, how to decrease the inequalities in our societies and create opportunities for all. Referring to the challenges faced today by the democracies of Latin America and the Caribbean, Miguel Vargas underlined the importance of having more transparent government, closer to the people, open to citizens participation, within an environment of respect for legal order and rule of law.

Closing the opening session, the Secretary General of the Socialist International, Luis Ayala, highlighted the role of organisations such as the OAS and the SI, in the world that emerged after the fall of the Berlin Wall in 1989, and particularly their commitment to democracy. He expressed satisfaction at holding a Committee meeting in the headquarters of the OAS for the first time. The hope of building a multipolar world was frozen during the period of the Cold War, but after it reached its end, new opportunities and new challenges had emerged for institutions like the OAS, with a leadership like that of Secretary General Insulza which has given a new stimulus to the organisation.

The same can be seen in other regions of the world, he added. In Africa, through its own regional organisations like the African Union, they are taking on new rules and commitments centred on democracy. Regarding Asia, Ayala spoke of his recent participation in India in the homage offered by the Congress Party to Jawaharlal Nehru, and about the similarity of principles and objectives between that political party of the largest democracy in the world and the Socialist International. He highlighted the fact that it was not the market that was responsible for the fall of the Berlin Wall a quarter of a century ago, but the demands of the people for freedom and democracy. In Latin America and the Caribbean, he recalled the key role of social democrats during the transitions from dictatorships to democracy during the 80s and 90s, and he pointed out that the current agenda of the SI is based on respect for this democracy and on policies of consolidation of freedoms and social inclusion. In places where there exist threats or tensions, the SI has been present, sending missions or carrying out activities. The most recent example was the mission sent to Venezuela, the report on which will be presented to the next World Council in Geneva. He concluded by highlighting the commitment of the SI to the struggle against inequality whose more concrete expression has been the creation of the SI Commission on Equality, and the global efforts to reverse global warming and climate change.

Furthermore, during the meeting, the representatives of the political parties present reported on the situations in their respective countries. The representative of the PSOE, Carme Chacón, shared with the Committee her assessment of the current situation in Spain.

In closing the meeting, the Chair of the Committee Miguel Vargas thanked once again the participation of the member parties, underlining the importance of having met ten days before the World Council of the SI, which will allow them to report to the Council in Geneva on the achievements and challenges of the progressive political forces in Latin America and the Caribbean.
_______________________________________________