Meeting of the SI Council at the United Nations, New York 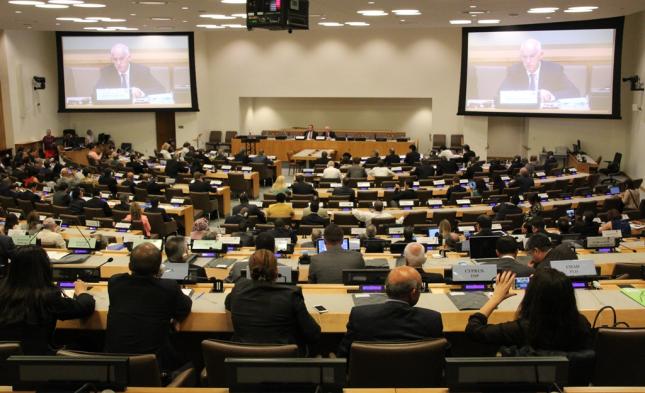 Latifa Perry
The Council of the Socialist International convened on 6-7 July at the United Nations Headquarters in New York, as delegates from SI member parties and invited guests (list of participants) gathered to discuss key issues to our movement on the global agenda. During the two-day meeting, participants addressed the themes of security and the fight against terror, our commitment to the sustainable development goals, and climate change and the COP21.

The Secretary General of the Socialist International, Luis Ayala, opened the meeting and welcomed all delegates. He presented the themes on the agenda, noting that they were topics on which a strong social democratic influence was required. On each theme, delegates would have the chance to listen to interventions from those directly affected by the issues at hand and from others responsible for shaping the debate on an international level. One of the strengths of the Socialist International was its ability to contribute to these discussions from many different perspectives and also to engage on an institutional level, today demonstrating its support for the ideals and work of the United Nations, by holding this meeting at the UN’s headquarters.

SI President George Papandreou began his opening address by reflecting on the result of the referendum the previous day in Greece and giving his analysis of the situation that had brought about that outcome, referring to new dividing lines in society as a consequence of regressive policies and globally by those who feel they have benefited from globalisation and those who do not. He referred to the statement by the SI Presidium in relation to Greece issued on the eve of this Council meeting, with an appeal to European leaders. He also underlined that the themes of this meeting reflected priorities of the global progressive movement. The world needed coordinated action against terrorism, to place human rights at the centre of development questions and global cooperation on climate change, he added.

On the theme of security and the fight against terror, representatives from countries suffering from terrorism presented the situation as they had experienced it. Reports on the ongoing battle against the terror group know as ISIS or Daesh were heard from Iraq and Syria, calling for enhanced support from the international community on the front line of their struggle. Many speakers underlined the need to uphold and defend the values of our International in the face of terrorism and violence, and not to abandon democracy and freedoms in pursuit of security. A functioning democratic state is a counter-example to proponents of fear and terror, and must be safeguarded. Another strong message that arose from the contributions was that more effective international cooperation would be needed to address the new threats to security that are emerging in the world. In the Middle East, North Africa, the Sahel and other areas of the world where terrorist groups operate, they do so without regard for national borders, and the response must therefore be international and multilateral. A declaration outlining the position of the International on terrorism and insecurity in the world, with reference to a number of specific situations touched upon during the discussions, was adopted by the Council. Interventions were also heard from representatives of all the SI member parties in Israel and Palestine, and a declaration of the Council on the Palestinian question was adopted.

On the subject of the sustainable development goals (SDGs), a keynote address was given by Helen Clark, Administrator of the United Nations Development Programme, UNDP, who emphasised that 2015 was a once in a generation opportunity year for development. She expressed her belief in ambitious, global goals which could motivate people to work for a common cause, and that the SDGs would target unfinished business from the period of the Millennium Development Goals, incorporating the economic, social and environmental aspects of development in a three pillar agenda. Diverse interventions from delegates on this theme highlighted the important role sustainable development had to play in peace and prosperity, tackling inequality and women's and minority rights. There was a consensus that the SDGs were extremely representative of many of the fundamental objectives of social democracy, which was reflected in a declaration on the subject.

The Socialist International continued to place a high priority on the battle to prevent catastrophic climate change, in particular in light of the upcoming COP21 summit where there are high expectations for a long-awaited comprehensive agreement on tackling climate change.  In an introductory speech on the theme, SI Vice-President Elio Di Rupo (Belgium, PS), called for a different economic model on climate change to promote global climate justice. He added that a different way to share the planet was needed, one which combines the environmental struggle with greater social justice and a more effective fight against poverty. The former president of the Maldives, Mohamed Waheed, also gave an introductory speech, in which he outlined the particular challenges faced by small island states confronted with climate change. These countries are often low-lying, remote and underdeveloped, and in need of a progressive agreement in Paris that goes beyond mitigation to help the process of adaptation. The Council adopted a declaration on climate and the COP21 outlining the views of the SI as we approach this moment of great significance for the future of the planet.

Jan Eliasson, Deputy Secretary-General of the United Nations, was invited to make a special intervention in which he highlighted the tasks of the UN in an ever more complex international situation with greater uncertainty, turmoil and conflict. Ethnic and religious factors in current crises meant that classic diplomatic tools no longer worked as well as in the past, with nations falling apart and posing serious challenges to regional and international security. All international solutions would require a formula based on peace, development and human rights, he underlined. Following his speech, Eliasson responded to a number of questions from delegates on the mandate of the UN, conflicts in the Sahel and Yemen and the respect for international law, stressing his belief that the UN was a force for good, but there were still occasions where extra efforts were needed from its members for the organisation to live up to its charter and its obligations to all the peoples of the world.

In accordance with a decision by the previous Council meeting, the agenda included a point on the views of the Socialist International on the issue of the Armenian genocide, considering its recognition by a number of national parliaments and supranational institutions. Following an agreement with the SI Vice-Presidents from Armenia and Turkey, it was announced and agreed by the Council that the Socialist International would hold a special hearing or round-table discussion on this issue later in the year under the title “Would Turkish recognition of Armenian genocide allow for genuine reconciliation between Turkey and Armenia?”. This meeting would include the participation of representatives of the SI member parties in Turkey and Armenia as well as other member parties interested in taking part, specially invited intellectuals, leaders of social organisations and others.

Following intensive work by the SI Committee on Migrations, a final draft of an SI Charter on the rights of Migrants was presented to the Council by Habib el-Malki (Morocco, USFP) chair of the committee. This Charter places the migration question at the heart of the agenda of the SI, focusing on the rights of each migrant, which are so often overlooked in the national debates on this issue. The Council unanimously adopted the Charter, underlining the commitment of the International to the fundamental rights of all people on the planet.

The recent SI Mission on Western Sahara was introduced by the chair of the SI Mediterranean Committee, Carme Chacón (PSOE, Spain) as an active contribution of the SI towards peace. In accordance with previous resolutions and decisions of the Socialist International, the mission had held talks in situ with the parties to the conflict and a report had been completed. Juan Antonio Yáñez-Barnuevo (PSOE, Spain), who headed the mission, presented an outline of the report and its recommendations. The Council, in accepting the report by consensus, recorded its appreciation for the work of the committee and its chair, and its recognition to the members of the mission. The Council agreed to continue to be actively engaged on this matter with a view to contributing to achieve a political solution to this conflict and a fair and lasting peace in that part of the world.

The Council heard a contribution on current developments in Venezuela, ahead of the announced legislative elections in December this year, and adopted a resolution calling for the release of Leopoldo López, Daniel Ceballos, Antonio Ledezma and all other political prisoners, guarantees of respect for fundamental rights and freedoms, and the return of those politically exiled.  A further resolution calling for the rights of prisoner Marafa Hamidou Yaya in Cameroon was also adopted.

Reports given by the co-chair of SIFAC and the chair of the Ethics Committee were also approved. The Council took note, in accordance with the statutes, of the ceasing of membership of four parties due to non-payment of membership fees.

The Council meeting elected Driss Lachgar, leader of the USFP, Morocco, as a new SI Vice-President and member of the SI Presidium.

Finally, the Council agreed to hold the second SI Council meeting of 2015 in Luanda, Angola, accepting the fraternal invitation extended by the MPLA, the SI member party in that country.

Greece - an appeal to European leaders

Declaration on security and the fight against terror

Declaration on the Palestinian question

Declaration on the sustainable development goals

Declaration on climate change and COP21

Charter for the rights of migrants

Report of the Socialist International Mission on Western Sahara

Appeal for the release of Marafa Hamidou Yaya in Cameroon

Activities and Statements of the Socialist International