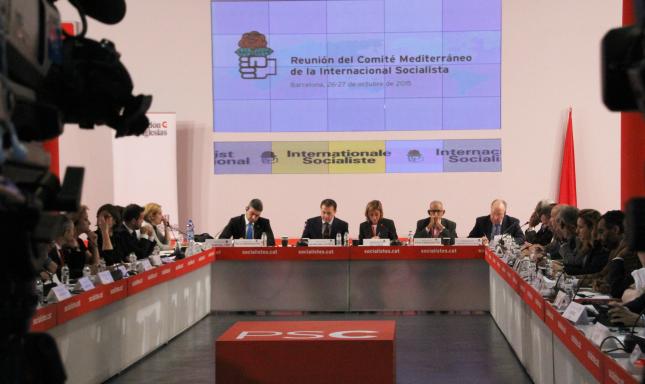 On 26-27 October 2015, the SI Mediterranean Committee convened in Barcelona, Spain, under the heading “For an end to conflicts – For peace in the Mediterranean”, hosted by the SI member party in that country, the PSOE.

The Committee’s discussions focused on three aspects of the main theme: 1) Addressing the human tragedy with humane solutions; 2) Developing and promoting political initiatives; and 3) Advocating and rebuilding regional cooperation.

Opening the meeting, the Committee chair, Carme Chacón (PSOE, Spain) warmly welcomed all participants to Barcelona, the city that connects Spain with the Mediterranean and which is itself a mixture of cultures. She spoke of one of the worst crises faced by the region, that of refugees fleeing conflict, who needed urgent assistance. It was equally incumbent on us all to do everything possible to stabilise the situation in the areas of conflict both to achieve peace and progress in the region and to enable the millions displaced to return home. She highlighted the need to recapture the spirit of dialogue that had led to the Barcelona process of 1995, for greater efforts to be deployed to redress the inequality that exists on both shores of the Mediterranean, and for true multilateral action based on an equal footing.

During the opening session, the SI Secretary General commented on the increase in conflicts in the Mediterranean region that have led to the current humanitarian crisis, conflicts also resulting from inaction in the face of inequality, bad governance and lack of democracy. The hesitation shown by governments in Europe in dealing with what is in effect a 1% of the global figure of refugees and forcibly displaced persons was lamentable. We look back with nostalgia at the concept of regional cooperation encapsulated in the Barcelona Project of 20 years ago, but lessons needed to be learned and a new diagnostic had to be made, with new goals and new approaches. Today we were experiencing a deficit of tolerance and cooperation which we needed to counter by more visibly promoting the political values we stand for in our International.

As an introductory speaker on “Addressing the human tragedy with humane solutions”, Umut Oran from the CHP, Turkey, a Vice-President of the SI, described the open door policy of Turkey since 2013, which today hosted over two million Syrian refugees. This had coincided with an increase in economic problems in Turkey, however free health care was provided. The lack of schooling led to unacceptable human conditions such as child labour, early marriage and street begging, and the informal Syrian work force increased tensions with the local population. The government was failing to deal with the problems due to the lack of a coherent refugee policy or long-term perspective, although it was clear that the conflict in Syria would not end any time soon. He underlined the global nature of the crisis and the consequent need for a global response.

On the question of migrations, the Committee also heard a contribution from Moavia Achament Mochamentin, a native of Sudan today working at the head of the Greek Forum for Migrants, who described the local conditions faced by migrants upon arrival in Lesbos and pointed out that 80% of the workers there were volunteers. The volume of migrants was greater than portrayed by the media and was growing, medical treatment was almost non-existent and there was scarce food and shelter. He described the tensions between the refugees themselves which fell mainly in two camps, the Arab and the non-Arab speakers. The situation was out of control, the flow of refugees was increasing too rapidly for institutions to respond to, and there was no sign of the situation improving.

During the discussions, participants highlighted the realities concerning refugees fleeing past and present conflicts experienced in various countries of the region, including Syria, Egypt, Lebanon, Cyprus, Israel, Palestine, Tunisia, Greece, Western Sahara and Morocco. The role and duty of social democrats was underlined in facing the rising xenophobia and the extremist approaches to this issue in some EU countries, as was the imperative of addressing the underlying political problems that lead to conflict and the need to foster internal dialogue. Looking ahead, the importance of providing education for refugees as a preventive measure against radicalisation and organised crime was also noted.

In this context, SI Vice-President Ahmed Ould Daddah, leader of the RFD Mauritania, pointed out that the issue of refugees was nothing new in the history of human existence. Today the responsibility lay with those governments that have failed to create reliable democracies and economic development, and with the big powers who supported them for their own interest. If we don’t change the methods and the goals, we will be crying crocodile tears. We should leave the beaten path and speak openly about the origins of the crises to address the true causes.

The second sub-theme of “Developing and promoting political initiatives” was introduced by Mustapha Ben Jaafar, leader of Ettakatol, Tunisia, and an Honorary President of the SI, who underlined the need to go back to the central ideas of the Barcelona project for peace, security and shared prosperity, as outlined by this committee at that time. That Process had led nowhere, as all efforts had concentrated on commercial projects, leaving aside the politics, in order to avoid differences. He highlighted the positive things about the recent Tunisian experience while noting the difficulties faced. Civil society involvement had led to the current progressive situation based on consensus but vigilance was required to ensure democracy.

The longstanding unresolved conflicts in the region, along with the more recent ones, were addressed, and the Committee heard valuable contributions from participants from both Palestine and Israel and from representatives from both communities in Cyprus.  In relation to the situation of Western Sahara, the Committee followed up on the report by the SI Mission that was presented to the last SI Council.

Introducing the third sub-theme “Advocating and rebuilding regional cooperation”, Mohamed Abdelkader of the USFP, Morocco, observed that the Mediterranean was a longstanding area of rivalry between super powers and conflicts contained for decades had returned with great violence. In the 20 years since the Barcelona Declaration the opposite of its purpose had been achieved and all efforts to integrate the Maghreb had failed. There was inequality and mistrust in the relations between the two shores. The non-resolution of old conflicts remained an obstacle to progress, and security in the region would only be achieved with a tangible improvement in the lives and welfare of the people. He proposed the creation of a task force to define our vision and provide a common reference framework.

Participants at the meeting also had the opportunity to share information on the internal situation in their respective countries and parties: on the work of the PSD in Andorra, the situation in Egypt following the elections, the prospects for overcoming the conflict in Syria, the political situation in Palestine and preparations for the forthcoming Fatah Congress, the internal situation in Israel on the 20th anniversary of assassination of Yitzak Rabin, the current situation in Cyprus, in Lebanon, and latest developments in Tunisia.

Before the conclusion of the meeting, the Secretary General informed the committee of the news he had just received from Ramallah of a knife attack on Mustapha Barghouti. He would convey the sentiments of solidarity of the committee members.

Following the debates, the Committee adopted a Declaration “Building Peace and Responses to the Refugee Crisis”, reflecting the points discussed and views shared by all participants.

BUILDING PEACE AND RESPONSES TO THE REFUGEE CRISIS

Democratic socialist parties from the Mediterranean region gathered for a meeting of the Socialist International Mediterranean Committee in the city of Barcelona on 26 and 27 October 2015, under the heading ‘For an end to conflicts – For peace in the Mediterranean.’

This meeting takes place at a crucial moment for the Euro-Mediterranean region for three reasons. Firstly, it is the 20th anniversary of the Barcelona Declaration, the founding document of a project of co-operation between the EU and the twelve countries on the southern shore of the Mediterranean. Secondly, the grave refugee crisis that has been afflicting our region in recent months calls for urgent and effective solutions to contain the greatest humanitarian crisis since the Second World War, and thirdly, because of the number and complexity of the open conflicts that are causing deaths and the displacement of people in a several of countries of the region.

As Mediterranean socialists, we recognise that the creation of the Barcelona Process at the 1995 Euro-Mediterranean Conference, and subsequently the Union for the Mediterranean, were important initiatives at their respective times which helped establish a forum for political dialogue and social and economic co-operation in a complex region.  However, the problems and crises in different parts of this region obstruct these initiatives, although the Mediterranean Committee continues to consider them absolutely necessary for dealing in a concerted manner with the challenges that confront us.

The Mediterranean is experiencing one of the worst crises in its history: the refugee crisis. Hundreds of thousands have arrived in Europe after crossing Mare Nostrum, fleeing from war and torture in their countries of origin. Many of them have lost their lives in the attempt or have disappeared in its waters. It is a human and humanitarian tragedy, in the face of which we, as socialists, cannot and must not stand aside with folded arms. We understand that we must attend to the needs of those who have justified reasons for seeking asylum in Europe, while at the same time we must try to remove the root causes of the problem: the war in Syria which has been going on for more than five years, the barbaric terrorism of Daesh/ISIS, the lack of democracy and bad governance in many countries that inhibits the opportunities and prospects of the young people of the region.

Our priority is the achievement of three aims: peace and stability, democratisation, and prosperity. Our region’s potential is weighed down by different conflicts, some of which are long-standing and still without resolution, like that of Israel and Palestine, the division of Cyprus or the question of Western Sahara, and others that are more recent, like Libya and Syria. We consider it necessary to continue working together, on an equal footing, to advance political initiatives that would lead to peace in our region, through regional co-operation, political dialogue and a global vision that goes beyond questions of security.

On the other hand, we want governments on both shores of the Mediterranean that are committed to the democratic principles of the Rule of Law, free, transparent and honest elections in every country, and full respect for basic rights and public freedoms.

In turn, we also have to press for actions to promote prosperity and redistribution in our countries, through co-operation for development, including social and business initiatives.

To achieve this, the member parties of the Socialist International Mediterranean Committee  propose the following measures and actions to confront the refugee crisis and to move forward with the peaceful resolution of the conflicts in the region:

Lastly, the member parties in this Committee wish to recall the spirit that 20 years ago launched the Barcelona Process, and we consider that, despite all the difficulties involved, it is necessary to return to the basic ideas of peace, stability and prosperity shared by countries on both shores of the Mediterranean, in order to put an end to the conflicts and inequalities, and to be able to offer a present and better future for our citizens.