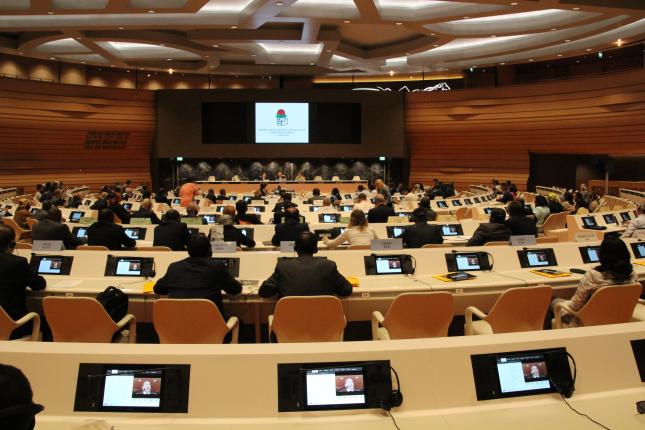 The Council of the Socialist International convened at the United Nations in Geneva on 1-2 July 2016. Its discussions focused on three main themes: 'Strengthening the political and humanitarian response to current international crises’, ‘Defending and securing democracy: supporting the struggle for rights and freedoms where they are under threat’, and ‘The need for an economy that works for all - defeating inequality in the world economy’. The meeting began with a minute's silence in sympathy with the victims of the recent terrorist attack at Istanbul's Ataturk airport and their families, and other innocents who have lost their lives in terrorist atrocities across the world. The Council also issued a declaration on the attack.

A return to the Palais des Nations building was the occasion for the SI to reaffirm the ways in which its global vision and objectives had much in common with those of the United Nations, as outlined by Luis Ayala in his opening remarks. The SI Secretary General, underlining the core belief of the SI in multilateralism, peace and universal rights, recalled that the Council was being held in the same room where years ago the UN Commission on Human Rights used to meet, and where he had at that time been present as a member of the democratic opposition to the military dictatorship in Chile. He outlined that the SI was ready to take on the challenges of working for peace, democracy and solutions to humanitarian crises. In light of the forthcoming XXV SI Congress, which he announced would take place in December 2016, he drew attention to the question of inequality in the world economy, which would be a major theme at that gathering.

Participants were welcomed to UNOG by Director-General Michael Møller, who expressed his appreciation that the SI had once again chosen to meet at the heart of International Geneva, focusing on the global challenges that were also at the centre of the United Nations agenda. He outlined his belief that the model of governance focused on States was being challenged by new actors in civil society, the private sector and academia. This mind shift, towards dealing with issues in a strategic and inclusive manner, was demonstrated by the adoption in 2015 of a historic roadmap for humanity by all UN member states, towards a sustainable world for future generations.

SI President George Papandreou addressed the Council at its opening, with a call for the SI to exert its voice around the world at a time when it was becoming more and more important for a strong social democratic movement that could seize the initiative on global issues. He identified the question of global inequality as an area in which cross-border cooperation and partnerships were vital, underlining the importance of the work of the newly established SI Commission on Inequality. Papandreou spoke out on the plight of refugees, and the need to counter the prevailing negative narrative, which fed into nationalism and insecurities. Speaking as a former refugee, he outlined how refugees should be seen as an investment in future relations with other countries and in building democracy around the world.

The exchanges on global crises incorporated many different perspectives. During the first session of the Council, a number of representatives of political forces from Turkey, Syria, Iraq and Iran presented their respective assessments of the humanitarian and human rights situation they faced. These reflections contributed to some of the declarations and resolutions later adopted by the Council, amongst them, one on the Kurdish region. Representatives of SI member parties in Israel and Palestine also contributed to the debate, and a declaration on the Palestinian question was adopted. In relation to the first theme, the Council also adopted declarations on the definitive ceasefire agreement in Colombia, the peace process in Cyprus, calling for a peaceful and lasting solution in Western Sahara and responding to threats to peace and security in Libya and Niger.

On the theme of democracy, Amre Moussa, attending the Council as a special guest, gave a keynote address. The former secretary-general of the Arab League considered that the SI had an important role to play in facing the growing social, economic, political and security challenges.  When it came to the Arab world, he added, there could be no return to the status quo ante. A new regional order, with an enhanced role for the UN Security Council was needed to bring about the requirements of peace and peaceful negotiations, responding to the aspirations of the people.

Delegates to the Council contributed to the debate with perspectives on the situation with regard to democracy in their respective countries. The vibrancy of the statements made was reflected in Council declarations on a number of specific countries later adopted. These include declarations on democracy in Belarus, Chad, Equatorial Guinea, The Gambia, Tunisia and Venezuela.

Elio Di Rupo, Chair of the SI Commission on Inequality, reported on the first meeting of the commission held in Brussels on 3-4 June, emphasising that the SI had the capacity to propose a progressive response to the inequality present in the world economy. He called for action to reduce the vast disparities, which were epitomised by the fact that the richest 80 billionaires in the world had the same combined wealth as the poorest 50% of the global population. Members of the Commission on Inequality Marian Lupu, former President of Moldova, an SI Vice-President, and Eero Heinäluoma, former Speaker of the Finnish Parliament and SI Vice-President, also addressed the Council on this theme as well as representatives of other SI member parties who spoke in support of its objectives, offering their personal perspectives on what the SI could do to contribute to a reduction in inequality.

The chair of the Ethics Committee, Jean-Paul Buffat (PS, Belgium), reported on the meeting of the committee on the eve of the Council. The Council approved the proposals of the committee to upgrade the Social Democratic Party of Azerbaijan (SDPA) to full membership and the National Union for Democracy and Renewal (UNDR, Chad) to consultative membership, and to admit the People's Movement for Progress (MPP, Burkina Faso) as a full member party.

The Council received a report from the co-chair of the Finance and Administration Committee, Maurice Poler (AD, Venezuela), on the current financial situation of the organisation and approved the audited accounts presented. All those parties with outstanding membership fees were reminded of their financial obligations and of the need to adhere to the stipulations in the SI statutes to preserve their membership in the Socialist International.