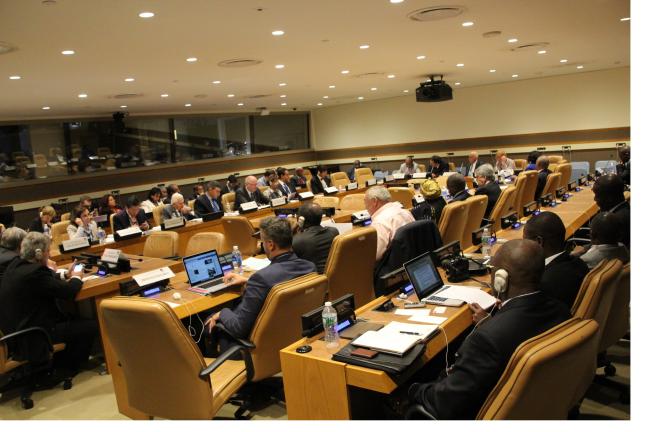 The annual meeting of the SI Presidium in conjunction with the high-level segment of the United Nations General Assembly took place on 21 September in New York, the eighth such occasion since 2008. The agenda of the meeting focused on the role of the social democratic movement in promoting collective action to confront prevailing challenges to security, democracy and sustainability in different parts of the world and the outcome of the UNGA high-level debate on the crisis of refugees and migrants.

The major focus of exchanges was the recently concluded UN Summit for Refugees and Migrants, with Presidium members united in their recognition of the urgency of coordinated action in response to the global refugee crisis. Contributions underlined the need for a more equitable sharing of the responsibility for hosting and supporting refugees around the world. At present, the greatest burden of the refugee crisis is being felt by developing countries, which are host to the vast majority of international refugees. For this reason the acceleration of progress towards a global agreement on safe, orderly and regular migration was considered essential.

A number of participants stressed that the international community, and in particular the most developed economies, have a collective responsibility and a duty to the refugees of the world, whose lives and livelihoods are threatened by the lack of concrete advances in this regard. At the same time, there remains a vital need for concerted action to address the root causes of the global refugee crisis. In this regard, participants underlined the importance of the work of the SI towards conflict resolution and tackling climate change, which are major drivers of global population movements.

Addressing the first agenda item and the contribution that could be made by the social democratic movement in face of the current global challenges, participants called for a combined strategy for peace and security, sustainable development and human rights. There was a shared conviction that for the challenges of peace, sustainable development and democracy to be met, social democracy would be required, with the SI an indispensable forum for cooperation in pursuit of common goals and objectives. One year on from the SDG summit, a number of interventions highlighted the continued importance of the Global Goals in the realisation of a greener and more peaceful world with opportunities for all, and the vital importance of ensuring the equal participation of women and men in building a sustainable future for all.

Underdevelopment remains a significant factor to migration, and the contributions of President Alpha Condé of Guinea and President Hage Geingob of Namibia identified the continued need for development assistance in their countries and a more equitable sharing of resources on a global scale. They and others considered that socialists and social democrats were uniquely placed to address the gaps between rich and poor, and redress the problems of poverty and economic injustice.

In accordance with the mandate given by the last SI Council in Geneva in July 2016, the Presidium had the responsibility of agreeing a venue for the forthcoming XXV SI Congress. The Secretary General reported that in discussions he had held with the leadership of the SI member party in Colombia, they had expressed the willingness of their party to host the Congress. This would be in line with the established practice within the SI of rotating the regional location of its Council and Congress meetings in order to reflect the global scope of the organisation. He outlined the significance of bringing together the global social democratic family in Colombia, at a historic moment for the country, as a result of the agreement reached between the government and the FARC guerrillas to bring to an end over 50 years of armed conflict. The presence of the SI in Colombia would be a concrete expression of the support of the movement for the courageous decision to bring peace to the country and a continued commitment to the post-conflict process of disarmament and reconciliation.

The proposal to hold the Congress in the city of Cartagena de Indias was overwhelmingly endorsed by the Presidium, with the meeting to be scheduled for the first months of 2017 following consultation with the hosts. The symbolism of the Congress venue and its timing will be reflected by the inclusion of peace as one of the main themes of the Congress, with reference to the successful peace process in Colombia and the need for advances towards peace in other conflicts around the world. The Congress will also focus, as another main theme, on the issue of inequality in the world economy, whose current impact has been a subject of recent work by the SI. Policy proposals on this theme will be presented to the Congress in a report from the SI Commission on Inequality, which is working on concrete initiatives for the reduction of inequality within and between nations.

The Presidium was updated on the response of the FSLN to the concerns transmitted by the SI to the party in regard to the dismissal by the National Electoral Commission of sixteen opposition parliamentarians and twelve alternates in Nicaragua. The Presidium noted that this matter would be further examined and addressed by the relevant statutory organs of the SI.

The current situation in Guatemala was raised, highlighting that a recent decree issued by President Morales restricted fundamental freedoms and rights.