SI meeting at the 135th IPU Assembly in Geneva 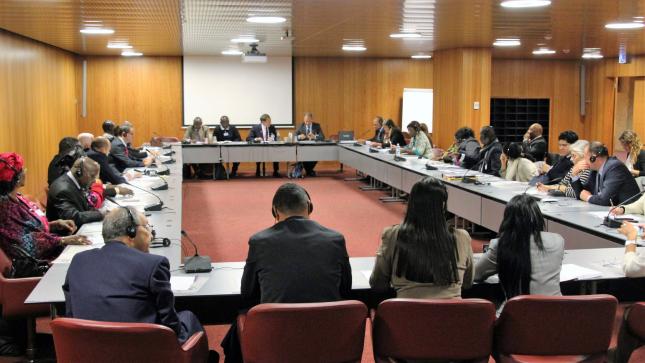 The Socialist International meeting at the 135th Assembly of the Inter-Parliamentary Union (IPU) in Geneva, Switzerland, was held on Monday 24 October 2016.

In the discussions, participants exchanged views on the emergency items on the agenda of the IPU that had been presented for adoption by the Assembly, drawing attention to the situations of Palestine, Venezuela and Syria. The Palestinian delegation recalled that the proposed emergency item on Palestine at the previous meeting had been postponed to this Assembly and underlined their continued need for international support and recognition. The head of the Venezuelan delegation described the crisis they were living with the continuing erosion of democracy, which had led them to present a proposal on Venezuela as an emergency item, and the meeting was informed of the dramatic developments that had taken place the day before when the parliament had been violently invaded. The situation of Syria was highlighted by many as an urgent international matter. Participants observed that it was helpful to have this opportunity to listen to their comrades, to share opinions and to express their solidarity.

The meeting heard a report on the latest developments in the fight to liberate Iraqi territory captured by ISIS and exchanged perspectives on the regional implications.

In his summing up, the SI Secretary General recalled the need to act as socialists. We are living in a world where there are very few rules and there is a multiplication of conflicts that cannot be contained within borders. We had the challenge of securing democracy with respect for freedoms and rights, without which there could be no peace. There was a need to strengthen multilateralism to counter the rise in populism and nationalism we are seeing today. It was therefore an obligation of us all to react to Syria, to respond to the call from Venezuela and to stand with the Palestinian people in their quest for the recognition of Palestine as a sovereign state.