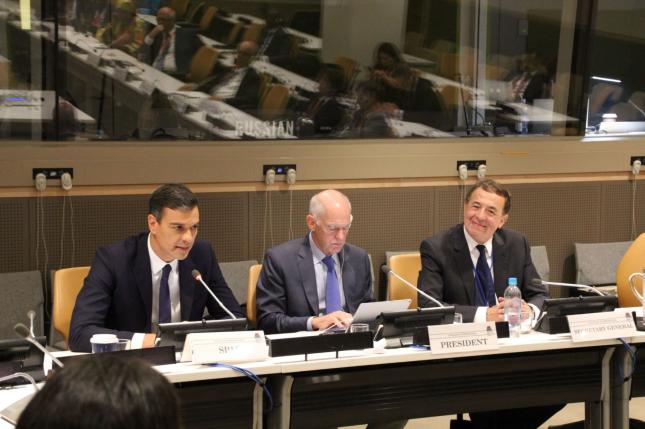 The Presidium of the Socialist International held its annual meeting in conjunction with the high-level segment of the UN General Assembly at the United Nations headquarters in New York on 27 September 2018. The members of the Presidium, along with invited heads of state and government and a number of ministers from SI member parties, focused their exchanges on the key issues for the global social democratic movement at the present time. The agenda for the meeting included the current international situation and global challenges that arise for the social democratic movement; emphases and priorities to ensure that the multilateral system effectively secures peace and sustainability and respect for freedoms and rights for all; and how to reinforce the foundations of our global society in these troubled times.

The SI President George Papandreou, opening the meeting, expressed concern over attacks on the multilateral system by proponents of radical nationalism around the world. While such forces were more concerned with looking for scapegoats than coming up with solutions, social democrats needed to give their alternative view, in a strong endorsement of the multilateral actions needed to deal with climate change, to achieve the SDGs and to increase fairness in the world. Luis Ayala, SI Secretary General, said that multilateralism had been central to the vision of our movement to gain and maintain peace, and therefore the SI has been among the strongest supporters of the UN. Nationalism and populism were a great challenge, both for the UN, which had today an ever more important role in the world, and for the members of the SI who, with their values and principles of freedoms, rights and social justice, had been the architects of new democracies in different parts of the world.

The contributions made by the heads of state and government present were a ringing endorsement of the importance of multilateralism in the face of the challenges faced by the whole planet, and a firm rejection of nationalism and isolationism. President Ibrahim Boubacar Keita (Mali) and President Mahamadou Issoufou (Niger) both reflected on the challenges faced by their neighbouring countries and the Sahel region, and the need for a common front against terrorism and a more peaceful world. The resolution of conflicts and securing peace remain vital tasks that can only be achieved through international cooperation, a fact that was raised by Prime Minister Pavel Filip (Moldova) in relation to his party's desire to secure peace in a challenging neighbourhood.

Multilateralism was also highlighted as a vital tool in the context of global development, and Prime Minister Ukhnaagiin Khürelsükh (Mongolia) stressed the importance of the SDGs and the right to development in a sustainable way, noting the sustainable 2030 vision of his government. The value of economic cooperation in ensuring prosperity and welfare for the people of the world was underlined by Prime Minister Duško Marković (Montenegro), who also reflected on the electoral success of his party based on the values it shared with the SI.

The President of the Spanish Government, Pedro Sánchez, outlined how his new government embodied the common values and principles of the SI, leading the way among OECD countries on gender equality, making green government a priority and addressing the migration crisis with a focus on human rights. He participated in exchanges with SI vice-presidents on issues of concern, giving his perspective on migratory policy and the plight of unaccompanied minors, the crisis in Venezuela, the challenges posed by the current US administration and prospects for forthcoming European elections.

The Presidium also discussed the future work of the International, having received a mandate from the previous Council to determine the final composition of the newly established SI Committee on Gender Equality. The Presidium welcomed and endorsed the names put forward by the SI President, agreed in coordination with the SI Secretary General and the SIW President, respecting the crucial principles of regional balance and equal gender representation. The first meeting of the committee would be held at the time of the next SI Council meeting. The SI Secretary General later reported to the Presidium that he had received a number of offers to host the forthcoming Council meetings, with the issue of timing and the order in which these meetings would be held to be resolved in the coming weeks. He noted that it was very positive news that the next four Councils could be held in different continents: Africa, Asia, Europe and Latin America.

Following the exchanges and concerns raised by a number of vice-presidents on particularly pressing issues, the Presidium approved the release of statements on Venezuela, on Nicaragua, on the Middle East and on Libya.