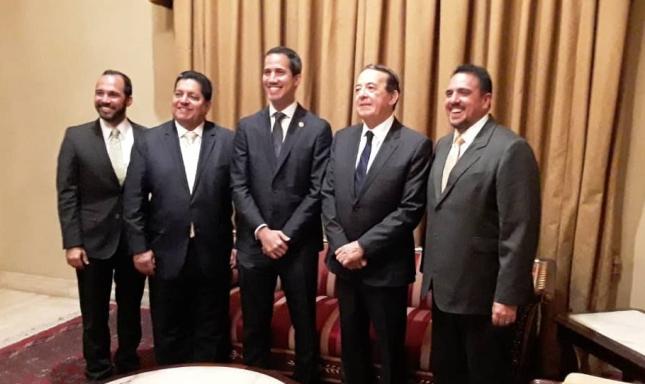 Leadership of the National Assembly of Venezuela with the SI Secretary General
The SI Secretary General, Luis Ayala, held a series of meetings in Venezuela from 18 to 22 February with the authorities of the National Assembly and with its three member parties in the country, Acción Democrática (AD), Un Nuevo Tiempo (UNT) and Voluntad Popular (VP), following the world Council meeting of the International held in Santo Domingo, Dominican Republic, at the end of January, where the situation in Venezuela was discussed.

During his visit, the Secretary General was received by the Junta Directiva, the leadership, of the National Assembly of Venezuela, composed of its President Juan Guaidó (VP) who is recognised by a significant part of the international community as interim President of the Bolivarian Republic of Venezuela, its First Vice-President Edgar Zambrano (AD), the Second Vice-President Stalin González (UNT), and the Secretary Edison Ferrer (PJ).

The discussions focussed in the first instance on the current situation of the country and its political, economic and humanitarian crisis; the political crisis resulting from the lack of a legitimate mandate for the current regime, while there persist violations of human rights, political prisoners and State violence with a continuing number of victims; the painful economic reality and the absence of opportunities which today afflicts the people of Venezuela; and the grave humanitarian crisis, particularly in regard to the tragic state of the health system and the absence of medicines with the consequent rise in the number of deaths, as confirmed by recent information from the World Health Organisation, WHO.

Among the matters addressed in the meetings was the fact that the electoral process of May 2018, denounced at the time by the Socialist International, did not have the necessary legitimacy and democratic credibility, and that at present the National Assembly, despite the regime's efforts to ignore its powers and mandate, is the only existent legitimate institution of government and therefore has today a central role in the restoration of democracy, as the expression of popular sovereignty, whose mandate is valid until the end of 2020.

During the meetings, the need to resolve political differences between Venezuelans peacefully, as called by the last SI Council, was reiterated, as well as the rejection of any form of foreign military intervention.

Also transmitted was the fraternal and constant solidarity of the International with its member parties and the Venezuelan people in their efforts to recover their freedoms and rights, re-establish democracy and to face the devastating food and health emergency that they are suffering.

Only the holding of free and fair elections, supervised by a new electoral authority that is fully independent and impartial, without arbitrary disqualifications or political prisoners, will allow democracy to be recovered and the normality of the political life of the nation to be re-established.

In the pursuit of these objectives, the International and its members will continue to accompany the Venezuelan people in their efforts for freedom and democracy.