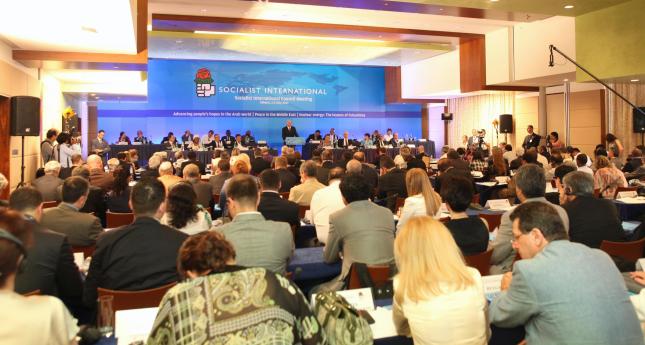 The Council of the Socialist International met in Athens on 1-2 July 2011, hosted by the Panhellenic Socialist Movement (PASOK), gathering delegates from SI member parties from all regions of the world, representatives from a number of invited organisations and parties, and other guests (list of participants).

Michalis Karchimakis, General Secretary of PASOK, welcomed all participants to Athens on behalf of the host party. SI President and Prime Minister of Greece, George Papandreou, in his opening speech thanked all those present for the solidarity and support they had shown to his country during the recent days and months, and stressed the importance of regional and global cooperation in dealing with the current phase of the global financial crisis. Greece had suffered the consequences of unregulated financial markets and the negative impact of speculation. The Greek people, through the vote in parliament on the eve of the Council, had stood their ground and now Europe, the international financial institutions and politics should play their role in shaping the future. Regarding the issues on the agenda, the President underlined the commitment of the International to stand by those in the Arab world fighting for democracy, as had been the case in Greece, and in so many other countries, where social democracy had been crucial to the struggle for democracy.

On the first main theme, Advancing people's hopes in the Arab World: supporting the vision of freedoms and rights for all, the discussions began with an introductory speech from the President of the Republic of Iraq Jalal Talabani, Vice-President of the Socialist International, who addressed in detail developments in the region. Under this theme, a number of speakers from the Arab world contributed to the proceedings with their perspectives on the situation in their own countries, from Egypt, Mona Makram-Ebeid; from Tunisia, Tahar El Almi, Popular Unity Movement (MUP); from Libya, Fathi Mohammed Baja, Responsible for Foreign Affairs of the Libyan National Transitional Council; from Yemen, Mohamed Ghalib Ahmed Alsaqladi (YSP); from Mauritania, Ahmed Ould Daddah (RFD); from Morrocco, Abderrahman Lamrani (USFP); and from Western Sahara, Mohamed Sidati (Polisario Front). The Council also heard the testimony of prominent bloggers from Egypt and Tunisia, Tarek Amr and Amira Yahyaoui, who spoke on the uprisings in their countries and their hopes for the future as cyber activists engaged with the democratic movements.

A resolution on the first main theme adopted by the Council highlighted the support of the International for democrats in Yemen, Libya and Syria in their current struggle, and the commitment to accompany the important process of transition to democracy in Tunisia and Egypt. In this document, the International reaffirmed its support for a peaceful and lasting solution to the Western Saharan conflict and the work of the UN Special Envoy, mandating the SI Mediterranean Committee to continue its work on this issue. In the coming weeks and months, missions of the International will visit those Arab countries striving for democracy whose situations were addressed by the Council, and a special Committee on the Arab world will be established in line with the adopted resolution.

The discussions on Peace in the Middle East included introductory remarks by Nabil Shaath (Fatah, Palestine), Micha Harish and Colette Avital (Israel Labour Party) and Mustafa Barghouti (PNI, Palestine). Speakers recalled the meeting in June of the SI Middle East Committee (SIMEC) in Tel Aviv and Ramallah, which emphasised the urgent need to resume negotiations and addressed the right of the Palestinian people to statehood (list of speakers). The Council adopted a resolution on peace in the Middle East based on the conclusions of that SIMEC meeting, reaffirming its view that in the absence of renewed negotiations, the Council supports the recognition of the State of Palestine by the United Nations within the 1967 borders.

Mizuho Fukushima, Leader of the Social Democratic Party (SDP) of Japan and an SI Vice-President, opened the discussions on Nuclear energy and the lessons of Fukushima, explaining that hers was the sole party in the country to have consistently opposed the use of nuclear energy (speech). Describing the devastating effects of the earthquake and tsunami in Japan on 11 March, she updated delegates on the current situation at the Fukushima nuclear power plant, and outlined the proposals of the SDP for the abolishment of nuclear power. Other speakers on this theme described how the issue of nuclear power had been debated in their own countries (list of speakers). The Council adopted a resolution on this theme, reiterating that nuclear is not a medium to long-term solution to global energy needs, and calling for the use of renewable energy.

The Council established a working group on reform of the Socialist International, to be co-chaired by SI Vice-Presidents Eero Heinaluoma (SDP, Finland), Beatriz Paredes (PRI, Mexico) and Nouzha Chekrouni (USFP, Morocco), to prepare proposals on this issue in advance of the next Council meeting. The first meeting of the Group will take place in Geneva in September 2011.

National situations of concern were highlighted in contributions from Aliaksandra-Volha Tyhrytskaya, of the Belarusian Social Democratic Party (Hramada), who drew the attention of delegates to the ongoing struggle for democracy in that country and the continued incarceration of opposition presidential candidates including Mikalai Statkevich, Chair of the Belarusian Social Democratic Party (Narodnaya Hramada), as well as the acute financial crisis now experienced in Belarus; from Sher Bahadur Deuba, SI Vice-President and former Prime Minister Nepal, who addressed the challenges for democracy in that country and the work of the Nepali Congress Party; and from Taulant Balla (SPA, Albania), who drew attention to the success of the party in recent local elections and the overturning of the initial result of the mayoral election in Tirana, which had no basis in any provision of the electoral code.

Other documents adopted by the Council included a resolution on South Eastern Europe, supporting European integration for countries of the Western Balkans, the strengthening of democratic institutions, the positive role of regional cooperation, and welcoming progress made by Croatia towards EU membership. The Council in this document also lent its support to the call of the UN Secretary General for an independent investigation into alleged trafficking of human organs and inhumane treatment during and after the armed conflict in Kosovo, and expressed its concern at the reversal of the mayoral election result in Tirana. A motion on the situation affecting a number of parliamentarians in Turkey country was also adopted, as was a statement addressing the serious situation in Belarus.

In his closing remarks, the Secretary General of the SI, Luis Ayala, outlined the programme of work for the organisation over the coming months, which will include meetings of the Committees for Africa, Asia and the Pacific; the CIS, Caucasus and Black Sea, and for Latin America and the Caribbean, among others. The newly established special Committee on the Arab World, the Commission for a Sustainable World Society, the Working Group on reform and missions to countries in the Arab world in line with the Council resolution would also take place.

The Council agreed that the venue for its next meeting would be Costa Rica, with the National Liberation Party (PLN) as hosts, and that the XXIV Congress of the Socialist International in 2012 would be held in South Africa, hosted by the African National Congress (ANC).

The Council elected Harriet Harman, Deputy Leader of the British Labour Party, as a Vice-President of the organisation in place of former Vice-President Gordon Brown, following nomination by her party.