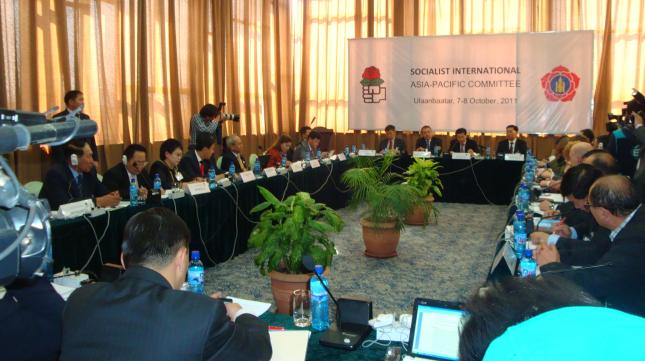 ‘Combining economic growth with environmental responsibility: the dual challenge of development’ and ‘Advancing social democracy in the Asia-Pacific region’ were the main themes on the agenda of the recent meeting of the Socialist International Asia-Pacific Committee, which took place in Ulaanbaatar, Mongolia, on 7-8 October, hosted by the SI member party in that country, the Mongolian People’s Party. (List of participants)

The meeting was opened by SI Secretary General Luis Ayala and Prime Minister and MPP Party Chairman Sukhbaatar Batbold. In congratulating the Mongolian People’s Party on their achievements, Ayala highlighted that for social democrats, democracy and good governance were key to economic growth and creating opportunities for people, as their country was experiencing. Economic development needed to be combined with sustainability and a heightened sense of responsibility. In today’s Mongolia we had a good example of a democracy that is delivering in economic performance to improve education, health, public services, in short, the living standards of its people. Many possibilities existed today for social democracy in the Asia-Pacific region, where until some years ago too often politics placed the emphasis only on the economy while ignoring rights and freedoms of citizens. Prime Minister Batbold warmly welcomed participants to Mongolia and expressed his party’s satisfaction at hosting this SI meeting. In addressing the main themes on the agenda, he stressed the need to use the natural resources at hand in the interest of the population while preserving and protecting the environment. He underlined the importance of enabling the people to benefit from the economic growth that Mongolia had been experiencing in recent years and referred to initiatives such as the Human Development Fund that had been implemented by his government to ensure that citizens received their share of the revenue from natural resources.

Introducing the first main theme, Enkhbold Nyamaa, Deputy Speaker of the Mongolian Parliament, outlined the policies and measures taken in Mongolia to turn the fast advancing economic development into an environmentally friendly green growth. The country was facing similar challenges as other fast growing economies and in their case, the development of their mining industry, the rapid increase of housing and a growing infrastructure with the resulting impact on the environment. Ultimately, the question was how to strike the right balance between development and environmental responsibility.

The ensuing discussions centred on the impact of global warming on the region, and on ways to ensure that the income from natural resources benefited the population as a whole. Other experiences of governments in the region in regard to similar types of funds as the one established in Mongolia were shared by participants. The need to hold mining and other companies working in the exploitation of natural resources accountable with regard to the protection of the environment was discussed at some length in which different experiences were examined. The regulatory role of the state was emphasised as well as the involvement of civil society and other NGOs in this process. The consistency of the policies of the state to halt environmental degradation was considered crucial to live up to the need to tackle the impact of global warming, the draining of lakes and rivers, or further desertification. Recent floods in countries of the region highlighted a sense of urgency on these issues, as could be seen in Pakistan, Cambodia or Thailand, where large numbers of people were suffering. Several projects and initiatives to tackle climate change, which had surfaced in different countries of the region were mentioned, as were the recommendations made by the SI’s Commission for a Sustainable World Society for commitments with clear objectives and deadlines, deeper emission cuts, binding engagements, the verification of commitments, and a real solidarity between developing and developed nations. It was underlined that fighting climate change was not only a challenge but also an opportunity to come up with fresh approaches to the current economic crisis to generate new areas for growth, new industries and employment.

Otgonbayar Yondon, Mongolian Minister for Education, introduced the second theme, ‘Advancing Social Democracy in the Asia-Pacific Region’, reporting on the situation of his own party and their engagement in moving forward the progressive agenda in Mongolia. During the discussions it was stressed that every step forward for democracy in the region was also a new opportunity for social democracy. Participants reaffirmed that functioning multi-party systems, the holding of regular free and fair elections and the respect of fundamental freedoms were an imperative. Social-democracy had a relatively short history in Asia but today new opportunities had arisen, building on the presence of the International over recent years supporting and engaging those who were mobilised in the search for democracy, freedoms and rights. A new era of change was beginning to take shape in the region, a change which in many countries was driven by values and principles of our movement.

Extensive and detailed reports on national situations in countries of the region were presented, starting with that of the host country, given by Foreign Minister Zandanshatar Gombojav. The Committee subsequently adopted a statement on Mongolia, which recognised the MPP’s contributions to the establishment of modern Mongolia, its role in the transition of the country to a true democracy and its part in the work of the Socialist International, as a centre-left, social democratic party leading a government with a positive and successful record. A second declaration of the meeting addressed a number of national situations which were part of the discussions. In this document, the contribution of Pakistan under the leadership of the Pakistan People’s Party, PPP, to the war against terror, its many sacrifices and its commitment to upholding the progressive agenda carried forth by the late Benazir Bhutto was recognised. In regard to the border conflict between Cambodia and Thailand, the declaration supports the dialogue in place to restore peace and stability, welcoming the fact that both parties have refrained from using force since the new government in Thailand came to power, urging both sides to respect the decisions of the International Court of Justice. On Burma/Myanmar, recent positive developments were found to be encouraging, hoping that they will lead to a decisive move towards democracy. The Committee extended its full support to Aung San Suu Kyi and the National League for Democracy in their efforts for a peaceful transition, calling for the immediate release of all remaining prisoners of conscience. On Timor Leste, the Committee congratulated Fretilin for the successful holding of direct elections for its leadership as part of the wider process of strengthening political parties in the region.

Discussions in Ulaanbaatar closed with a warm recognition by participants of the fraternal hospitality they had received from the MPP, the people of Mongolia and the media who widely covered the meeting.