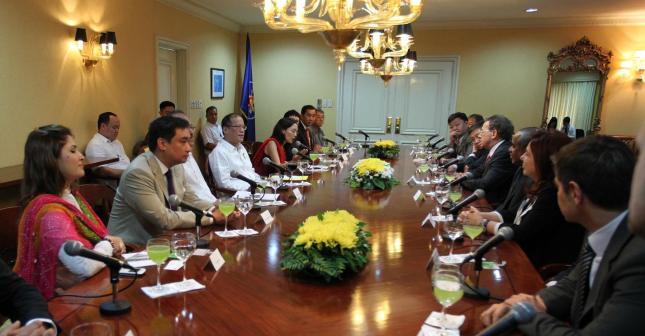 The Socialist International Committee for Asia and the Pacific met in Manila on 20-21 May, with an agenda which focused on advancing social democracy and defining priorities for the region, and on sharing experiences and approaches in resolving conflicts and securing democracy. Hosted by the SI–member Akbayan Citizen’s Action Party, the meeting brought together representatives of parties from Australia, Cambodia, Germany, Greece, Italy, Japan, Mongolia, Pakistan, the Philippines, Sweden, Timor-Leste, and from the Asia-Pacific organisation of the International Trade Union Confederation (List of Participants).

The discussions began with a visit to the Malacañang Palace for a meeting with President Benigno ‘Noy-Noy’ Aquino, who presented developments in the Philippines and the priorities of his coalition government. On behalf of the International, the SI Secretary General Luis Ayala expressed the organisation’s appreciation of the many issues being tackled by the government that also figured high on the agenda of our global movement, such as human rights, strengthening democratic institutions, the struggle against poverty, the anti-corruption drive, good governance, education, social protection and reproductive health, and he underlined the SI’s satisfaction that Akbayan was collaborating with the President’s coalition government on these matters. This meeting at the Presidency also provided an opportunity for all participants to directly address the President on issues of interest or concern.

During the working sessions which followed, the Chair of the Social Democratic Party of Japan, Mizuho Fukushima, an SI Vice-President and Co-Chair of the Committee, led the discussions on the situation in Japan following the devastating earthquake and tsunami which had hit the country. The severe damage caused to the nuclear power plants of Fukushima by this natural disaster had brought into question worldwide the sustainability of nuclear energy and highlighted the urgent need for alternative energy policies. Following that debate, in a statement on Japan and Nuclear Power, the Committee reiterated its solidarity with the Japanese people and called for stricter regulation and monitoring of nuclear power plants and coordinated action on nuclear waste management.

In its discussions, the Committee held debates on a range of issues affecting Asia and the Pacific. It adopted a statement on the border dispute between Cambodia and Thailand, calling on both parties to establish a permanent cease-fire and resolve the situation peacefully through effective political dialogue, and another statement on climate change and biodiversity in the region, calling on governments to do more in mobilising available resources to address this serious question.

Following constructive and fruitful exchanges on the national situation in a number of countries of the region, the Committee adopted a statement on Pakistan underlining the high price it has paid in the struggle for peace and as a key ally in the front line in the war against terror, reiterating its solidarity with the Pakistan People’s Party in its efforts not to allow extremists to hijack its social democratic agenda. A statement on Burma/Myanmar was also agreed, in which the Committee called for an immediate and decisive move for democracy in that country and resolved that a delegation of the Socialist International should visit Burma to undertake contacts with the democratic forces there, at the same time bringing them our support and solidarity.

Conveying to the members of the host party its gratitude for the fraternal hospitality shown on the occasion of this meeting, the Committee approved a motion on Akbayan, in which it expressed support for that party in its efforts to work with the government in pursuit of the goals we share within our International.