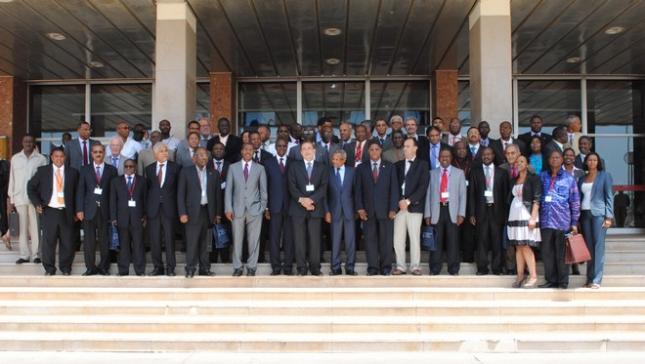 A meeting of the Socialist International Africa Committee took place on 30-31 July in Praia, Cape Verde, hosted by the African Party of Cape Verde's Independence, PAICV. Delegates from member parties and guests from across the continent and beyond gathered for this two day meeting in preparation of the XXIV Congress of the Socialist International to be held in Cape Town, with a view to incorporate the regional perspectives on the main themes to be addressed by the Congress. (List of participants)

At the opening of the meeting, which took place at the National Assembly of Cape Verde, José Maria Neves, Prime Minister of Cape Verde and President of the PAICV, addressed participants of the meeting as well as parliamentarians and government officials, underlining that if there was no democracy there would be no development, as there was no democratic state without strong and credible institutions and the rule of law. Peace and stability were the precondition for a sustainable development, and regional integration and upholding of the common values of our political family would allow us to achieve this.

In his opening remarks the Secretary General of the Socialist International, Luis Ayala, observed that Africa had made great progress and socialdemocrats in the continent had been in the forefront of the advance of democracy, resolution of conflicts and the efforts for more equality. Support for democracy and the rule of law was still needed, as the situation in Mali and Guinea-Bissau following coups d’état had shown. The Socialist International stood fully committed on the side of our members in those countries and throughout the continent in their struggle to defend and strengthen democracy wherever it was under threat.

Ousmane Tanor Dieng, Chair of the Committee and Secretary General of the Senegalese Socialist Party, formally declared the meeting open and reminded participants that the Committee was meeting in Cape Verde for the third time which was a symbol of the democratic achievements and stability of the country. A concerted African response was needed in times of crisis, to fight the scourge of terrorism and problems in the world economy, to increase multilateralism, and establish good governance which was key to development and democratic stability. In commemoration of the passing of President John Atta Mills of Ghana, the meeting observed a minute of silence.

The first theme of discussion, “The financial crisis: perspectives for the region and the global context” was introduced by Cristina Duarte, Cape Verde, Minister of Finance, who summarised the impact of the financial crisis on the region and its effects on the African economy and its repercussions on the African outlook, noting that regional drivers were key to a growing economy. During the discussions on this theme, a broad range of issues were highlighted. Money laundering, drug trafficking, corruption and national and regional crises leading to extremism and political uncertainty were also an important hindering factor, slowing down growth and development in the region. Participants underlined the fact that this global crisis needed a global response and as socialists we were looking for alternatives to the neoliberal approach which resulted in nothing but austerity. There was a call for clear leadership in the region on this issue and the need to make sure that democratic rights and institutions were preserved while fighting the crisis. It was also seen as crucial to make the African voice heard at the international level and to be involved in decision-making that would impact the whole region.

In the extensive discussions on the second and third themes, “Working for peace and multilateralism: resolution of conflicts in Africa” and “Advancing and strengthening democracy in the continent and overcoming authoritarianism”, participants concurred that the democratic will of the people had to be respected and the Committee called for the re-establishment of the democratic order in Guinea-Bissau and Mali where coups d’état by the military had taken place. In Mali, several factors were threatening the return to constitutional order and territorial integrity, among them armed rebel forces that were active in the North, and religious extremists were attempting to take over. In the meantime efforts for the establishment of a national unity transition government were currently under way. Neighbouring countries and the sub-region were under threat of terrorist groups which tried to spread into bordering territories. Carlos Gomes Junior, Prime Minister of Guinea-Bissau, summarising the situation in his country where the first round of the presidential elections had been recognised as free and fair by internal and external observers before the coup d’état, called on the UN and the international community to address the situation in his country and take the necessary steps to allow for a swift return to democratic rule.

Participants agreed that as socialists our first loyalty was to democracy, to the institutionalisation of democratic institutions and the respect for human rights. There were increasing conflicts in the region over raw materials and commodities, and food crises such as in the Sahel region were becoming more frequent. Strengthening relations and exchanging information was another way to enhance multilateralism and a growing economy could be a factor of stabilisation and peace. Participants also called for the African Union, with its newly elected Chairperson Nkosazana Dlamini-Zuma, to play a bigger role in the resolution of conflict, with the general understanding that regional institutions were able to resolve crises on their own without the intervention of the wider international community through the means of dialogue and negotiation.

At the conclusion of the meeting, after the extensive two days discussions, participants adopted the Praia Declaration, which highlights some of the key points addressed, underlining that the financial crisis has to be faced with measures to encourage growth and investment and therefore the creation of jobs, increasing multilateral cooperation to guarantee national unity, peace and stability, and the consolidation of true democracy in the continent in order to prevent military coups and guarantee the respect of the constitutional order.