SI at the 131st Assembly of the IPU 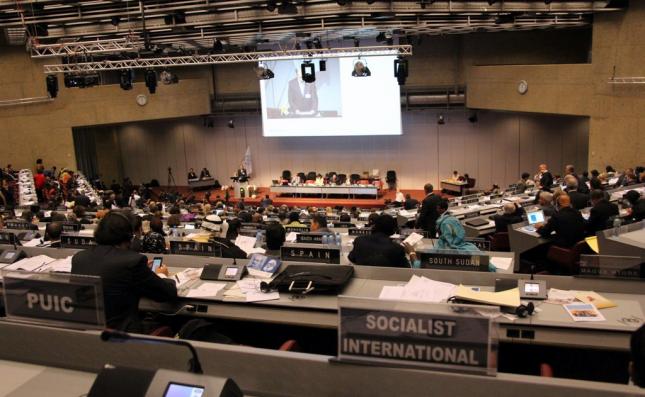 Latifa Perry
The Socialist International attended the 131st Assembly of the Inter-Parliamentary Union held in Geneva from 12 to 16 October 2014. During the event, the SI held its regular meeting of Parliamentarians present at the Assembly from SI member parties and invited guests.

The meeting began with a special moment of appreciation for the outgoing President of the IPU, Abdulwahad Radi, who had been invited to join the gathering for its opening. The chair conveyed on behalf of all participants and of our movement, gratitude and recognition for his successful work as President of the IPU. Radi thanked all participants for their cooperation during his tenure at the head of the organisation.

The discussions of the meeting included an exchange of views on the main themes to be addressed by the 131st Assembly, the election of the new President of the IPU, an overview of current international threats to peace and security and the contribution of social democracy to overcoming them, as well as reports by members on particular issues of national concern.

On the first theme of the agenda, several participants expressed their disappointment at the final choice of the emergency item on the IPU’s agenda. While sharing the concern over Ebola as a major global issue, it was pointed out that this was a subject on which there was a great deal of consensus, whereas the more contentious matter of terrorism had been rejected by the Assembly. The delegation from Iraq in particular was disappointed not to have the opportunity to explain what was going on in their country vis-à-vis ISIS. Others expressed concern that at these assemblies of the IPU there was a growing tendency to avoid discussion on the most sensitive issues, recalling how it had been impossible at the previous meeting to include a debate on Ukraine and this time there was to be no discussion on Syria, Iraq or Palestine. The SI Secretary General proposed to issue a statement on terrorism following this meeting, which would be based on previous statements made by the SI Council and Presidium, with the added element of Kobane and the Kurds' courageous struggle to defend it.

The importance of the ideological dimension of these SI meetings was once again highlighted and welcomed, considering that in the IPU geographical interests tended to predominate. It was also hoped that SI statements at IPU meetings could contribute to shaping national policies by parliamentarians in their respective countries.

An exchange of views was held on the election of the new President of the IPU, during which a broad range of opinions were expressed on the different candidates, some based on gender, others on agreements by geo-political groups, and others on political considerations.

In the report on the situation in Iraq, the meeting heard of the dire situation on the ground and the effect it was having on the citizens, particularly on the minorities who were suffering the brutality of ISIS with no hope. There had been very little humanitarian help and the central government had still not passed the federal budget. Mosul, the second largest city after Bagdad, was totally occupied by ISIS and that being the only direct access to the border with Syria. The town of Ramadi, which was their only border with Jordan, was at that moment approximately 80% under the control of ISIS, whose forces were now only 20 kms away from Baghdad. International help was needed, however, it was reported that there was a lack of understanding surrounding the plan of the coalition bombing.

Concerning the Sahel, it was underlined that the situation in Libya was crucial to the stability of the whole of the Sahel and all in the international community needed to take this on board. It was highlighted that Libya had become a sanctuary for drug trafficking and the border region between Niger and Nigeria a safe haven for Boko Haram. Blame was placed on the West for creating the present crisis in Libya and action was needed against the drug traffickers and the fictional state that some people were trying to set up there. In regard to the situation in the north of Mali, it was also pointed out that not all Tuaregs were involved with the MNLA and in their struggle with the situation in the North, the support of the Socialist International for the government in Bamako was very important.

The Palestinian delegates reported on the situation in Gaza. Every effort was being made for the unity government to work and to benefit the Palestinian people. In this sense, despite efforts by a number of countries in the region to hinder that process, they had also succeeded in forming a delegation containing all factions to negotiate a ceasefire with Israel. It was underlined that the key problem to solve was the occupation itself, without which there could be no peace. They appealed for efforts by the international community towards a timetable to end the occupation which was also seen as the root and cause of terrorism. Recent developments in some EU countries in favour of recognising the Palestinian state was welcomed as a step towards increasing the number of 134 countries which have already done so.

The meeting also heard how Malta continued to be affected by the flow of migrants in the Mediterranean Sea, something it was stressed was an international issue and therefore needed to be addressed internationally. Malta’s proximity to Libya was also highlighted and concern expressed over the fact that while there was much talk of ISIS in Iraq and Syria, the instability in Libya also made it vulnerable to extremists.

A contribution was also heard from the youngest participant in the IPU Assembly, a member of the Namibian youth league, who pointed to the fact that too often young people were being used as scapegoats by both governments and terrorist groups. It was highlighted that the protection of young people was taking second place to political interests, and greater priority should be given to tackle sex trafficking and the exploitation of minors. The importance of states ensuring military and intelligence services was also underlined, as militarily weak states were vulnerable to terrorist attacks.

Concluding the meeting, the SI Secretary General said that as socialists and progressives we stood for rights and freedoms, without which there would always be conflict. We also stood for peace and for resisting and overcoming terror wherever it occurred. Referring to the question of migrations, he said we were all part of the same world economy and this was an illustration of how issues could not be tackled in isolation and our International would continue to bring together parties from all continents to jointly address the major challenges we faced.