SI Meeting at the 133rd Assembly of the IPU in Geneva 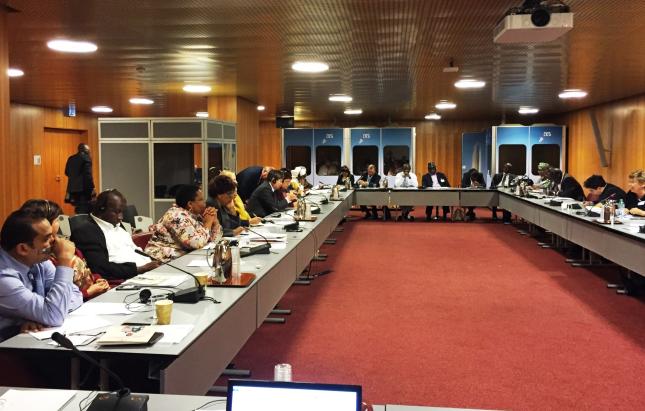 During the 133rd Assembly of the Inter-Parliamentary Union (IPU) held in Geneva from 18 to 21 October, the Socialist International held its regular meeting of parliamentarians belonging to SI member parties to exchange views on the main issues on the agenda of the IPU, and to share information on developments within their own countries.

The dominant theme of this Assembly’s discussions was that of Migrations and how to implement a fairer and more humane way of dealing with this phenomenon. The emergency item of debate also focused on the protection of refugees and ensuring compliance with international and humanitarian law. The SI Secretary General, who chaired the SI meeting, recalled the extensive discussions on these issues that had been taking place at different levels within our International and made specific reference to the Charter for the Rights of Migrants that had been elaborated by the SI Committee on Migrations and adopted by the SI Council at its last meeting in July 2015. In the discussions on these issues, participants highlighted different aspects from their national perspectives. A common thread in the contributions was that whether dealing with regular migration, which was a constant, or with refugees, what we were dealing with in essence was human beings and it was the responsibility of all governments to protect them and to respect their dignity. Particular attention was paid to the plight of the most vulnerable, including women and children.

The need to tackle the root causes of mass migration and growing numbers of internally displaced people and refugees was emphasised and a call was made for more decisive and effective action by governments and international bodies to achieve fair and lasting solutions not only in regard to conflict resolution,  but also in the fight against poverty and unemployment.

Another aspect that was highlighted, related to ensuring respect for the general rules of labour laws. In relation to migrants and refugees, it was pointed out that issues surrounding the right to work, exploitation of domestic labour, women and children needed to be further addressed, as well as trade union rights for migrants.

Among the reports on national situations, the meeting heard from the Palestinian representative on the deteriorating situation between Palestine and Israel, and from the chairman of the IPU’s Middle East Committee. Here again the underlying causes of the conflict were highlighted as fundamental issues that could only be resolved with the equal will and commitment of both sides.

Participants also received a report on the worrying situation in Iraq from the head of the PUK delegation in the Iraqi parliament, who underlined the need for international solidarity. The country was struggling to cope with the threat of ISIS, it had four million internally displaced people and women and girls were being kidnapped and trafficked in growing numbers.

The meeting also welcomed a report on the recent elections in Guinea, which saw the return to power of President Alpha Condé at the head of the second democratic government of that country.

At the conclusion of the meeting, emphasis was put on the importance of international bodies in bringing people together and promoting common solutions. In the SI we stood for multilateralism and solidarity. Also stressed was the need for more politics, which was about values and ideals, which were in deficit today in many places around the world.