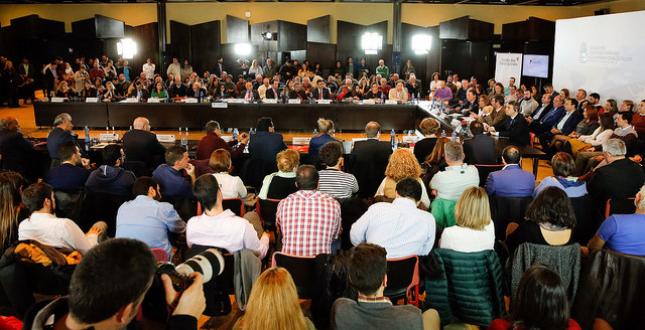 The Socialist International Mediterranean Committee held a meeting in Malaga on 16-17 December 2016, hosted by the Spanish Socialist Workers' Party (PSOE), focussing its discussions on “The current challenges to ensuring democracy, freedoms, rights, and peace in the Mediterranean” and “Strategies for reaffirming our vision and values in the Mediterranean region”.  Participants in the debates included delegates from Algeria, Cyprus, France, Greece, Israel, Italy, Lebanon, Mauritania, Morocco, Montenegro, Palestine, Spain, Tunisia, Turkey, Western Sahara and Syria, who contributed different perspectives on these themes, reflecting the diversity and complexity of the region while at the same time the values and principles that unite us in the Socialist International.

Introductory speeches to the main themes were given by Mustapha Ben Jaafar from Ettakatol, Tunisia, an Honorary President of the SI, and by SI Vice-Presidents Ahmed Ould Daddah from the RFD Mauritania and Umut Oran of the CHP, Turkey.

A high priority in the discussions was given to developments in Syria, to the dire situation of the people of Aleppo, and the international community’s failure to prevent or mitigate the humanitarian disaster that continues to unfold. It was highlighted that while almost 5 million Syrian refugees had sought shelter in neighbouring countries, most of the European countries had failed to fulfil their commitments, quite apart from their moral and legal obligations. It was also observed that the strictness with which the austerity measures were applied by the EU, which did so much damage to the region as a whole, was not matched by the same strictness in regard to the agreed cuotas for migrants, noting at the same time that there was an evident need for the European Union to return to its founding values.

Six years on from the so-called Arab Spring, major setbacks in democracy and fundamental rights were observed in the countries affected, although Tunisia still offered a promising example.

The recent increase in terrorist attacks was a cause of grave concern, which all participants resoundingly condemned, and the need to tackle the causes of radicalism was underlined. Concern was also expressed over the loss of basic human rights resulting from security measures taken in a number of countries to counter terrorism.

Various conflicts affecting the region, both old and new, were discussed with parties directly concerned. In this regard, the Committee agreed on a series of proposals to achieve a fair Mediterranean Pax, which are outlined in the declaration subsequently adopted by the meeting.

Cause for optimism was seen in the situation of Cyprus where negotiations due to continue in January looked hopeful for providing a bi-zonal solution to that long-standing conflict and the committee was unanimous in its support for the process underway, which if successful would bring hope to others in the region as a good example of political coexistence in peace.

The agenda also included a discussion on the national situation in the different countries of the region, which offered the opportunity for participants to share information on the current realities in their respective countries, on work of their party, and the challenges ahead.

The Committee then adopted the Declaration: “A call for hope against resignation: For greater solidarity with refugees, towards the 'Mediterranean Pax’ ”, reflecting the key points of the discussion.

Following these debates, Ricardo Cortés inaugurated a special closing session in which the Committee was joined by Susana Díaz, President of the government of Andalucía and Secretary General of the PSOE-Andalucía. In her address, Susana Díaz pointed to the rich diversity of the peoples and countries that made up the Mediterranean basin and underlined the need for consolidating democracy, improving the economy and for the EU to coordinate a plan for migrants and refugees, particularly minors arriving without supervision. She stressed that we are not just socialists but also internationalists, and our strength lies in our values and ideas.

The SI Secretary General, Luis Ayala, touched on the key elements that dominated the discussions of the Committee and highlighted the crucial issues of Peace, Equality and Solidarity, which would form the basis of our discussions at the forthcoming SI Congress to be held in Cartagena, Colombia, in March 2017. He also looked forward to the taking office of the new Secretary General of the United Nations, António Guterres, a person we all identified with as socialists and who would have all our support in the complex work ahead of him.

______________________
MALAGA DECLARATION
A call for hope against resignation:
For greater solidarity with refugees, towards the 'Mediterranean Pax'
Original: Spanish
Democratic socialist parties from the Mediterranean region gathered for a meeting of the Socialist International Mediterranean Committee in the city of Malaga on 16th and 17th December 2016, with the goal of discussing and seeking solutions to the current challenges in the Mediterranean, eventually aiming to ensure the attainment of democracy, freedoms, human rights and peace in the region.

This meeting is taking place at a critical time for countries on both shores, stressed by several crises that question our stability and future. This Committee is not only very concerned about the evolution of the various conflicts affecting our area, but also remains distressed by the European Union's self-absorption in recent months.

For this committee it has become self-evident that we can only address the problems in the Mediterranean by considering it as one single entity. We are completely interdependent, and firmly believe that peace, prosperity, democracy and equality will not be accomplished, without tackling problems together and from a shared vision.

The war in Syria shames us all. We recall with dismay that it is estimated that around 400,000 people have died in 6 years, that 6.6 million Syrians are internally displaced and almost 5 million have sought shelter in neighbouring countries such as Lebanon, Jordan, Iraq, Turkey and Egypt. In contrast, most countries in Europe have not even hosted the refugees that reached their shores after dangerous journeys aspiring to a safer and better life, failing to fulfil their own commitments, as well as their moral and legal obligations. For this reason we appreciate the efforts of those few European countries, like Italy and Greece, which have opened their doors to them.

On the other hand, five years after the so-called Arab Spring, it is obvious that those democratising processes that inspired the region with hope have not evolved as we would have wished. Far from it, we have noted with great concern major setbacks in human rights, civil liberties and the rule of law in several countries, not only on the southern coast of the Mediterranean, as is the case in Egypt, but also in countries such as Turkey.

Moreover, we are horrified by all the terrorist attacks that have taken place in the last years throughout the Mediterranean, from Istanbul to Paris, from Brussels and Cairo to Tunis. We express our outrage and condemn the recent terrorist strikes by PKK that hit Turkey in the last weeks, where dozens of innocent people have lost their lives. Our governments should confront these threats from a global perspective, not only fighting terrorists on the ground but also tackling the causes of radicalism.

We are aware how old problems in the region remain entrenched, as is the case of the Palestinian-Israeli conflict or the Western Sahara issue, although we await with hope that the negotiations on Cyprus will soon be concluded with success. We express solidarity with the member parties of the Socialist International in government in the Mediterranean countries of the South Eastern Europe, and welcome the new government in Montenegro.

In this context, the member parties of the Mediterranean Committee of the Socialist International propose the following conclusions and measures to advance the pacification of conflicts in the region and achieve a fair Mediterranean Pax, based on the principles of equality, justice and democracy:

Tackling all these challenges is our main task as Socialists and as members of this Committee. We must not give up. We must keep on fighting, day by day, shoulder to shoulder, so that this fragile, but at the same time unique area that is the Mediterranean, becomes more just, secure and prosperous for all.