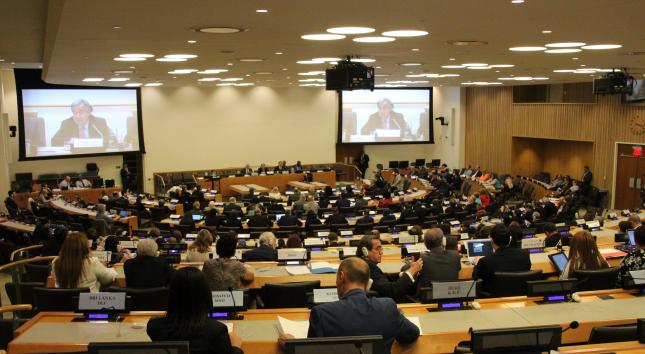 Latifa Perry
On 11-12 July 2017 the SI Council held its first meeting after the XXV Congress, returning to the United Nations headquarters for two days of discussions on strengthening multilateralism, reaffirming social democratic values and defending democracy.

The Council was also the first occasion upon which the SI had met at the UN since the election of the new UN Secretary-General, António Guterres. A former president of the Socialist International, Guterres participated as a special guest during the opening session in which he outlined his vision for the work of the UN, before inviting comments and questions from delegates in an interactive dialogue.

Introducing António Guterres at the opening of the meeting, SI Secretary General Luis Ayala said that all those present were very pleased to have the opportunity to directly hear the views of the UN Secretary-General, particularly at this time when we were entering a new inter-Congress period and we would continue to work for solutions to the same global challenges confronted by the UN. He congratulated Guterres on his new role and thanked him warmly for having accepted the invitation to come and engage in a conversation with members of the global social democratic political family.

António Guterres expressed his pleasure to be able to take part in this SI Council meeting and to share global concerns with this political gathering. He perceived a deficit of trust in the world, between peoples, countries and institutions, which was linked to the difficulties associated with globalisation. The UN's agenda 2030 was part of a drive to make globalisation fairer, and ensure that no-one was left behind. He underlined the importance of the work of multilateral organisations, which needed to be strengthened to address issues such as climate change, which was exacerbating many of the other difficulties faced by the world.

Following his introductory remarks, the UN Secretary-General responded to comments and questions from Council attendees. Delegates representing parties from across the world drew attention to wide-ranging issues such as refugee rights and migrations, gender equality, climate change and the resolution of outstanding conflicts. The Secretary-General addressed delegates' concerns from both a personal and institutional perspective, underlining his determination to promote peace and reconciliation efforts, gender parity and human rights mechanisms during his time in office.

SI President George Papandreou gave thanks to António Guterres, and expressed that his election had brought a new spirit to the UN, creating hope at a difficult time for the world. He noted that though the UN Secretary-General could not be partisan, social democrats had the opportunity and responsibility to be vocal on the issues he had raised, and called on them to achieve what they could through dialogue, friendship and compassion.

Before the opening of discussions on the main themes of the agenda, the Council was informed of developments in Spain, where the SI member PSOE had elected Pedro Sánchez as its leader with a large mandate. Sánchez was duly endorsed by acclamation to fill the position on the SI Presidium held by the party, and then spoke as a newly elected SI vice-president, delivering a keynote address underlining the shared history of the PSOE and the SI, and calling for an alternative vision of globalisation in face of climate change, inequality, and challenges to peace and democracy.

Exchanges on the first main theme, 'Strengthening multilateralism for peace', touched on peace and conflict resolution processes in many parts of the world that are ongoing with varying levels of success. The Council heard that since the XXV SI Congress in Colombia, great forward steps had been taken in that country with the laying down by the FARC of all weapons, which had been received by the United Nations. Perspectives were heard on a great many unresolved conflicts in different regions of the world from those directly engaged in efforts for peace, including the situation in Iraq, the Kurdistan region, Syria, Moldova and Transnistria, the Great Lakes Region, Cyprus, India and Pakistan, Turkey, Western Sahara, Azerbaijan and Armenia, and Israel-Palestine. A common thread to these contributions was the need for the SI to be at the forefront of multilateral efforts to bring conflicting parties to the negotiating table and promote peace, except where an agreed bilateral process is in progress.

The second main theme of the meeting was 'Reaffirming our values and policies for the change we need'. Speakers on the issue were in broad agreement that socialists and social democrats needed to be more assertive in promoting the values and policies that would bring positive change to the most vulnerable people across the world, and make clearer the distinction between the forward-looking proposals of social democratic parties and the conservative and reactionary alternatives.

On the subject of democracy, the focus was on the need to overcome challenges to democracy in many parts of the world, under the main theme 'Defending and protecting democracy where it is denied or is under threat'. Speakers from a number of countries suffering a democratic deficit outlined their experiences and the challenges they face.

Being its first meeting in a new inter-Congress period, the Council also had the task of establishing the working organs of the SI. The membership of the statutory committees of the SI was duly elected, in line with the principle of regional balance and ensuring representation for SIW on both the Ethics Committee and the Finance and Administration Committee. Regional committees for Africa, Asia-Pacific, Latin America and the Caribbean, the CIS, the Caucasus and the Black Sea, and the Mediterranean were re-established. The Council endorsed the re-establishment of the SI Middle East Committee at a time when new initiatives and new impetus to the peace process are sorely needed. The Council also established a Committee on Migrations and Refugees.

The Council further agreed that the work of the SI Commission on Inequality in the World Economy would continue for the next inter-Congress period. A number of interventions had been made during the course of the Council meeting, underlining that despite the successful reaching of an agreement in Paris, much work remains to be done on climate change. In order to ensure that the SI accompanies this process and to build on the achievements of the SI Commission for a Sustainable World Society in previous years, a commission on the issue of climate change and energy was established.

In line with the decision of the XXV Congress, the SI Council will continue to be engaged in the implementation of the principle of gender parity within the organisation, and will set up the Committee on Equality and define its membership and mandate at the next Council meeting.

The Council acted in order with a specific mandate from the XXV Congress to fill vacancies on the SI Presidium in line with statutory requirements for gender and regional balance. Elected to join the ranks of the SI vice-presidents were Janira Hopffer Almada (PAICV, Cabo Verde), Shazia Marri (PPP, Pakistan) and Bokary Treta (RPM, Mali).

At its conclusion, the Council adopted a number of resolutions and declarations relating to items discussed under the main themes on the agenda from a global perspective and on specific situations of concern to SI member parties.

The Council decided that its next meeting would be held in Spain at the invitation of the Spanish Socialist Workers' Party (PSOE) and its leader Pedro Sánchez, at the end of November 2017.

Minutes of the Council