SI at the 137th IPU Assembly in St Petersburg, Russia 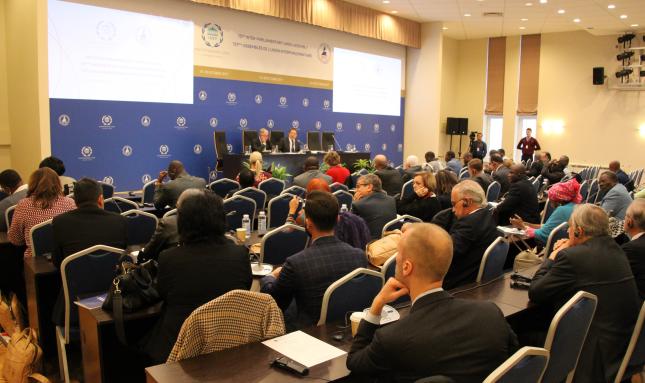 The 137th Assembly of the Inter-Parliamentary Union (IPU) was held in St. Petersburg, Russia, from 14 to 18 October 2017. The inaugural session included an address by the President of the Russian Federation, Vladimir Putin, along with outgoing IPU President, Saber Chaudhury and the heads of both the Council of the Federation and the State Duma of Russia.

This Assembly, the largest gathering of the IPU to date, voted to give prominence, as an emergency item, to the humanitarian tragedy affecting the Rohingya people being forced to flee Myanmar, victims of ethnic cleansing. Other themes highlighted during the discussions were democracy and human rights, the threat of nuclear weapons, and the role of parliaments in promoting peace. The Assembly elected a new IPU President for the next three years, Gabriela Cuevas from Mexico.

Within the framework of the Assembly, the SI held its usual meeting of parliamentarians from the social democratic political family to exchange views on key issues for debate and decisions due to be taken by the Assembly of the IPU and to discuss issues of common concern on the international agenda.

Participants received a first-hand report from the head of the Fatah delegation to the talks that had just concluded in Egypt between Fatah and Hamas for reconciliation and national unity in Palestine. These positive developments were welcomed, and seen as a major contribution and a catalyst to move forward the stalled process for the two-state solution and peace in the region. Participants shared information on developments in different regions and countries, among them the situation in the Sahel and efforts to end terror and secure peace, with contributions from countries in that region and others. Democracy was also a strong theme in the exchanges, with a particular focus on the situation in Venezuela.

Elections to a number of posts within the IPU, including that of President, was a subject of discussion and the meeting had the opportunity to hear from participants who were standing for election to different responsibilities.

The Secretary General reported on various activities of the Socialist International and the work ahead following the decisions of the last Council and Congress, and on its global work in favour of democracy, the resolution of conflicts, and for greater equality in the world economy.