Meeting of the SI Council in Barcelona, Spain 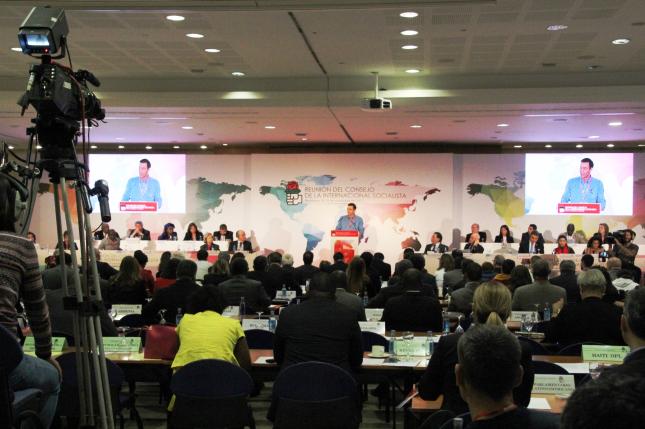 The Council of the Socialist International met on 24-25 November in Barcelona, hosted by its member party in Spain, the Spanish Socialist Workers' Party, PSOE. Delegations from all continents, representing SI member parties and invited guests, gathered to discuss three main themes: Building the future with the left: democracy, equality and solidarity; Working for stability and peace in a world of multiple conflicts; and Promoting human responses to humanitarian crises.

At the opening of the meeting, SI Secretary General Luis Ayala outlined the importance of the themes to be discussed and their significance for the socialist movement. He was pleased that the SI had delivered on its commitment to meet in Barcelona, saying that the SI was here to listen, understand and support the efforts of the socialists in Catalonia and Spain, at the side of Pedro Sanchez, leader of the PSOE, and Miquel Iceta, First Secretary of the Socialist Party of Cataluña. He noted with satisfaction that 2017 had been a year in which the SI had reaffirmed its commitments in face of global challenges, following on from the XXV Congress in Cartagena in March. Its member parties were motivated by a shared conviction that our principles, values, and politics, the way we understand them, are crucial in our common struggle for greater equality, justice and solidarity.

Miquel Iceta expressed his pleasure and honour to welcome all the delegates to Barcelona, in an address that reviewed the historical work of the SI and PSOE in promoting shared values and principles. He recounted the exemplary manner in which Catalan society had reacted to the recent terrorist attack, declaring that the people were not afraid because they were together. He expressed his firm belief that there should be no new borders around Catalonia, and that the PSC should continue to work for Barcelona to be the capital of the Mediterranean and one of Europe's great cities. His party offered Catalonians a country less divided, in which a willingness to give would allow all citizens to win, echoing the words of former SI president Willy Brandt, who considered reconciliation to be the best weapon against isolation and prejudice.

SI President George Papandreou congratulated the PSOE and the PSC for standing up for shared socialist values at a historically crucial moment. He was convinced that both the PSOE and the PSC were on the right path and that they would be successful in providing lasting solutions to the crisis in Catalonia. This was one of many challenges in a turbulent world, and he stressed that it was not possible to improve societies without the inclusion and participation of citizens, giving them the voice to air their grievances and hopes. He reflected on the growing inequality in the world and lack of democratic accountability of corporations that had become bigger than governments. Increased fear and marginalisation in the world must be overcome with coexistence he added, and real change needed a democratic vision.

Pedro Sánchez, leader of the PSOE and an SI Vice-President, made a keynote speech at the closing of the meeting. He described Barcelona in the terms of Miguel de Cervantes as a city unique in beauty, which was a host to foreigners, hospital for the poor and homeland to the brave, words that continued to define the city. The PSOE was committed to radical equality between men and women, the recognition of multiple identities and global responses to global challenges. It would not let anyone appropriate Catalonia or Spain, but he saw the need to reach a new agreement and open the door to a new constitution. This vision was reflected in the Declaration on Catalonia adopted by the Council. Addressing current global challenges, he called for more democracy to tackle globalisation, for a social market economy that would prioritise combating climate change, for ending social disequilibrium and fighting corruption, leaving the best possible legacy for the next generation.

Being the 25th of November the International Day for the Elimination of Violence Against Women, Sánchez underlined the significance of that date for global social democrats. Earlier in the Council, all delegates had marked this event and sent a strong message of denunciation of these crimes on behalf of socialists the world over.

The diverse interventions on the main themes of the agenda incorporated many perspectives, ranging from the presentation of specific local and national situations to reflections on the global challenges faced by the people of the world. Specially invited guests included Antonio Ledezma (ABP, Venezuela), a former political prisoner who just days prior to the meeting had escaped house arrest in Venezuela where he had been held for more than a thousand days, who called for the liberation of Venezuela and an end to the suffering of its people. Maung Tun Khin, representing the Burmese Rohingya Organisation, presented a harrowing and deeply moving account of the extreme violence and persecution suffered by the Rohingya minority in Myanmar in recent months. The Council would later adopt a resolution on the situation in Venezuela and a declaration on the Rohingya.

Following the debates, the Council also adopted resolutions and declarations on Catalonia, the elections in Equatorial Guinea, on Honduras, Nicaragua and Haiti, on North Korea, on the Kurdish People, on the recent elections in Nicaragua, on slavery and migration, and on Yemen. The Council expressed its sympathy and sent a message of solidarity to all those affected by the terrorist attack on a mosque in the North Sinai region of Egypt during Friday prayers on 25 November, resulting in the loss of more than 300 lives.

In accordance with the mandate given by the XXV Congress and subsequent Council meeting in New York earlier in 2017, the SI agreed and established the Committee on gender equality. Its responsibilities will include identifying the obstacles and promoting strategies and innovative ideas for achieving gender parity.

The Council received reports from both the Ethics and the Finance committees which had met on the eve of the Council. The Ethics Committee had elected Ariane Fontenelle (PS, Belgium) as its chair for the current inter-Congress period and the Finance Committee had re-elected Maurice Poler (AD, Venezuela) and Janos Veres (MSzP Hungary) as co-chairs and Márcio Bins (PDT, Brazil) as its vice-chair. The Council adopted the reports of both committees, and approved the budget of the SI for 2018.