Meeting of the SI Africa Committee in Luanda, Angola 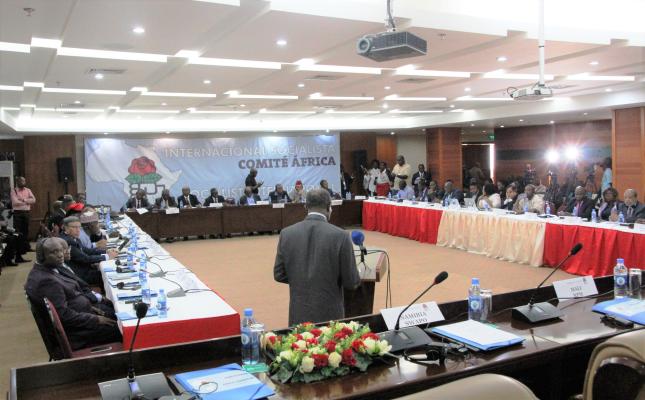 The African member parties of the Socialist International convened in Luanda on 12-13 December 2017, hosted by the SI’s member party in Angola, the MPLA. The Committee´s discussions centered on two main themes: “For humane, just and democratic policies – our role and our commitment in Africa” and  “Securing peace and resolving conflicts in the Great Lakes Region”.

The meeting was opened by Julião Mateus Paulo “Dino Matross”, from the host party, and by the SI Secretary General. In his opening address, Julião Mateus Paulo referred to this important moment in Angola’s history following the last elections which their candidate had won with 61% of the vote, and the new cycle that had now begun. They aimed for greater economic diversification with less dependency on oil, a transformation accompanied by a process of reforms of the State and the judicial system, and to ensure employment, better services, more social justice and a better quality of life. On the international scene, he pointed to the increasing tensions and underlined the need for cooperation with the United Nations for peaceful solutions to the multiple conflicts in the world. Regarding Africa, he spoke of the conflicts in the Great Lakes region, in Somalia, Nigeria, Libya, Sudan, Central African Republic and in Mali, which had led to illegal emigration in large numbers and under inhumane conditions. He reiterated that Africa was rich in natural resources but poor in development. Within the SI we were united in the need to work together in addressing the problems of the continent.

The SI Secretary General Luis Ayala congratulated the President of the Republic, João Lourenço, on his election victory, expressing his satisfaction and honour at having been able to accompany the electoral process and the transformation that Angola was going through. He welcomed João Lourenço’s approach to the work of his government to “improve what is good, correct what is wrong”. The commitment of the President to combat corruption deserved the attention and respect of all leaders. Angola had progressed considerably since achieving peace in 2002 and Lourenço provided a solid vision and leadership for the future. As social democrats and socialists we stood true to our principles and promises, committed to guaranteeing freedoms and the respect for people’s rights, men, women and the youth. In the SI we remain firm in the fight against economic inequality, in responding to the challenges of sustainable development and to improving people’s lives. Recognising the world of conflicts we live in, he reiterated the need to tackle the deficit of democracy, the problem of inequality, and increase justice and solidarity, to ensure peace.

Commencing with the theme of Securing peace and resolving conflicts in the Great Lakes region, the Committee heard a key-note speech by the Angolan Minister of Foreign Affairs, Manuel Augusto, who highlighted Angola’s performance in resolving conflicts, noting that while there was underway a process for pacification and stabilisation in the East of the DRC, new conflicts were emerging in Burundi, Central African Republic, Sudan, and South Sudan. He spoke of the recent summit involving the Heads of State of Angola, Congo Brazzaville and the DRC, an initiative of Angolan President João Lourenço, and reiterated Angola’s commitment to the search for peace and conflict resolution in the region. Members of the committee engaged in an active debate on this subject and benefited from a question and answer session with the Minister.

On the theme of humane, just and democratic policies – our role and our commitment in Africa, a key-note speech was presented by Manuel José Nunes Júnior, MPLA political bureau member and a State Minister, in a session which included a wide range of perspectives with many contributions from representatives of member parties in Africa.

The meeting offered the opportunity for participants to share information on the national situation in their respective countries. Numerous reports were presented, including on the crisis affecting the Anglophone population in Cameroon; the grave developments that have been taking place in Togo over the last four months; the situation in the Democratic Republic of Congo where the government has committed to holding elections on 23 December 2018; the current climate in Equatorial Guinea following the 12 November elections, where to no one’s surprise the ruling party won all but one of the seats in the Chamber of deputies, every seat in the Senate and every local council; the situation regarding Chad, Mali, Niger, Senegal, and Guinea, whose President Alpha Condé, an SI member, is the head of the African Union. An in-depth presentation on the current situation in Angola was also presented by João de Almeida Martins, member of the MPLA Political Bureau.

Following the discussions and the work of those gathered in Luanda, a Declaration was issued reflecting key aspects of the debates.

The member parties of the Socialist International meeting in Luanda on 12-13 December, hosted by the MPLA, the member party in Angola, declare:


In relation to the expectations of our political family in regard to Congo:

Concerning the serious developments that have been occurring in Togo during the last four months:


With respect to Western Sahara:

In relation to the dramatic and worrying evolution of the crisis affecting the English speaking population in Cameroon:

1. We deplore the loss of human lives within the civilian population as well as within the ranks of the defence and security forces. We urge President Biya to open a frank and sincere dialogue with the different credible actors in Cameroonian society, in order to avoid the radicalisation of populations in the English-speaking regions of the Northwest and Southwest that would benefit the secessionists and other opportunists. We give encouragement to the Social Democratic Front (SDF) in their search for a lasting solution to this crisis by means of a dialogue at every level and under any shape or form.

In what concerns the efforts for achieving peace in the African continent:

1. We reaffirm our full commitment and support to the Heads of State and to the leaders of the SI parties in the African continent, like those in Mali and Niger, or Burkina Faso, that today work to ensure peace, to stop the terror and to provide a secure environment for all their citizens. At the same time, we wish to state our firm solidarity with all the peoples and nations of Africa that suffer the impact of terror and the consequences of the painful conflicts that affect the nations of the continent from Nigeria and South Sudan to Somalia.

Our appreciation to the MPLA and to our comrades in Angola:

1. Finally, we wish to express our profound gratitude for the fraternity and warm hospitality extended to us by our comrades of the MPLA during the course of our work in Luanda.