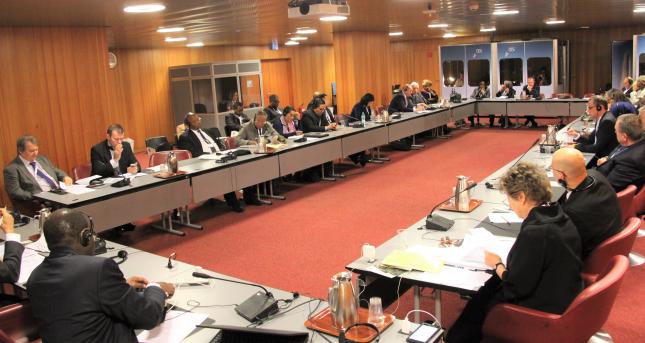 The SI held its meeting of parliamentarians from SI member parties in the context of the 138th Assembly of the Inter-Parliamentary Union, IPU, which on this occasion took place in Geneva from 24 to 28 March.

The meeting, which was attended by parliamentarians from all continents, offered the opportunity for participants to exchange views on some of the key issues on the agenda of the IPU Assembly and to discuss particular concerns of a national or international nature, with other colleagues from the social democratic family.

Discussions included exchanges on issues that had been put forward for adoption as emergency items at the Assembly, including that of the consequences of the US declaration on Jerusalem and the rights of the Palestinian people in Jerusalem in the light of the UN Charter and resolutions, and of violence against women in the workplace, in particular in parliaments, in the wake of the #MeToo movement. The meeting heard from the Palestinian representative on the developments in the six months since the previous meeting and the pressure they had been under by Israel and the USA since the decision by the US government to move its Embassy to Jerusalem, compounded by the further US decisions to cut its contributions to UNWRA with dire consequences for nearly 5 million Palestinian refugees, and to close the PLO office in Washington. During the discussions there were expressions of support and solidarity with the Palestinians and statements regarding the importance of tackling the issue of violence against women.

A further subject of attention by participants was the theme of strengthening the global regime for migrants and refugees, bearing in mind the UN-led process on the Global Compact for Safe, Orderly and Regular Migration (GCM) and the Global Compact for Refugees (GCR), which are due to be adopted at the end of this year. It was proposed to invite members participating in these parliamentary exchanges to contribute to develop common concepts in regard to these subjects for a shared approach from our political family on the GCM and the GCR, further to previous SI positions and decisions on migrants and refugees.

In the discussion on migration and refugees, there were unanimous expressions of condemnation of Myanmar over its treatment of the Rohingya people and the failure of Aung San Suu Kyi to speak out, constituting a betrayal both of the Burmese people and of the confidence that the international community had placed in her. It was pointed out that the Socialist International stance in this regard was very clear from the beginning of this tragedy, however, it was noted that members of the international community continued to pour money into Myanmar and action was needed to stop that and to change political attitudes.

The meeting received a report on the continuing grave situation in Venezuela which had led to the exodus of over 4 million Venezuelans during the last few years. The UNHCR has been calling on the international community to extend their assistance to these Venezuelans who have been forced to leave their country. It was reported that the population was suffering from hunger and misery, as well as a lack of pharmaceutical products and treatments for chronic diseases. The lack of food was compounded by the destruction of the country’s agriculture industry and the gross mismanagement of the economy by the government. It was also reported that the majority in the national parliament, two thirds of which were the opposition, were being punished by the government and had not been paid a salary since the beginning of 2016.