Meeting of the SI Committee for Latin America and the Caribbean in Montevideo, Uruguay 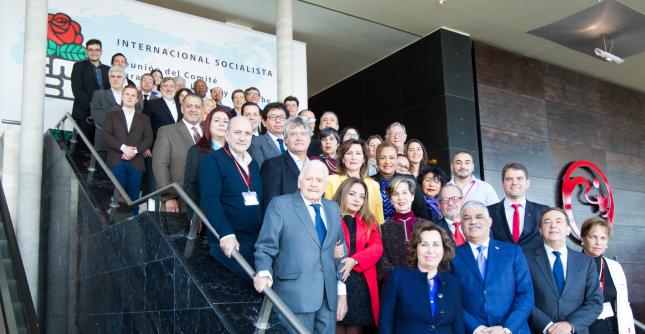 A meeting of the Socialist International Committee for Latin America and the Caribbean took place in Montevideo on Thursday 17 and Friday 18 May 2018, hosted by the SI member party in Uruguay, Nuevo Espacio (NE).

During the opening session, the NE President and SI Vice-President, Senator Rafael Michelini, welcomed the more than fifty delegates (see list of participants), representing around twenty social democratic parties of the region. Michelini also welcomed the presence in this session of the Committee, of government and political authorities of the Uruguayan Frente Amplio, giving special thanks to the Vice-President of the country, Lucía Topolanski, and the former President José  Pepe Mujica.

The President of Nuevo Espacio highlighted some of the characteristics that, in his opinion, can explain why his country has, for the third consecutive term, a centre-left coalition government, the Frente Amplio, whereas in some countries of Latin America and the Caribbean the forces of the social democratic family are living complex times. From its creation and then in government, the Frente has recognised the diversity of its members and also the underlying need of unity in its actions, as a process of synthesis within the group.

Miguel Vargas, as Chair of the Committee, thanked the host party and during his intervention he reflected on the violence in Latin America and the Caribbean, the challenges to public security, inequality and the importance of education to improve the current situation. The Dominican Foreign Minister recalled that Latin America and the Caribbean is the most violent region on the planet, according to recent studies of the WHO. The question of public security is a complex one and inequality on the continent is one of the elements that explain the violence. Vargas highlighted the importance of education to fight it in the medium and longer term. A better educated people have access to better jobs and better living conditions, therefore our countries must focus on establishing comprehensive education systems to promote creativity through innovation and research and to prepare citizens to respond to the challenges of the forthcoming years, he said, in closing his remarks.

The Secretary General of the Socialist International, Luis Ayala, pointed out that the SI is a family that shares values, principles and also a collective memory, a fact that led him to remember in Montevideo a great Uruguayan leader who fell in the struggle for democracy, Zelmar Michelini, whom he had the opportunity to meet. He remembered as well the historic Dominican leader José Francisco Peña Gómez, as the 20th anniversary of his death was being commemorated. Peña Gómez was the first Chair of the SI Committee for Latin America and the Caribbean, following the road taken to extend the International beyond Europe and to transform it into a truly global organisation. Following on that path the SI, in its global action, was in solidarity with the liberation struggles in Africa, raising, in so doing, another pillar of the SI in that region of the world where today there are many parties of this political family in government in countries where today there is democracy, peace, rights and freedoms. The SI is also present in Asia, Eastern Europe and the former Soviet republics, a fact that makes it the biggest organisation of political parties on a global level. Currently, our movement faces the challenges of populism, emergent nationalisms with their consequent democratic setbacks, a growing level of insecurity due to open or latent conflicts in many places of the world, the effects of climate change on the planet and increasing inequality, all of which hands us a particular responsibility given our identity and our goals for peace, democracy and equality.

Following the opening session, the delegates debated the main themes set out in the agenda: “Working for the change we want: strengthening the institutions of the democratic state, ensuring rights and freedoms and improving human wellbeing”, and “Latin America and the Caribbean in the face of the global challenges of strengthening peace and security, building an economy of more equality, and responding in a just way to migration and the urgent situation of refugees”.

Participants from the different countries of the region addressed in detail the themes of the agenda, discussing as well the challenges posed by gender issues today in the region. The Committee was attended by and could listen to the interventions of the SI Vice-Presidents from Latin America and the Caribbean: Isabel Allende (PS, Chile), Elsa Espinosa (PRI, Mexico), Sandra Torres (UNE, Guatemala), Jesús Rodríguez (UCR, Argentina), Bernal Jiménez (PLN, Costa Rica), Víctor Benoit (Haiti), the SI Vice-President and host of the meeting, Rafael Michelini, and the Vice-Chair of the Committee, Eyra Ruiz (PRD, Panama).

The Committee had also the opportunity to hold exchanges with Alejandro Guillier and Efraín Alegre, candidates of the social democratic political forces in the last presidential elections in Chile and Paraguay, respectively, who shared their electoral experiences and their viewpoints about the big challenges faced by the countries of the region.

During the morning of the second day of the meeting, the delegates presented and shared views on the national situations in their respective countries. At the end of the discussions and as a result of them, the Committee adopted declarations stating its opinions on Bolivia, Guatemala, Haiti, Nicaragua, Panama, Paraguay, Venezuela and a declaration in honour of José Francisco Peña Gómez.