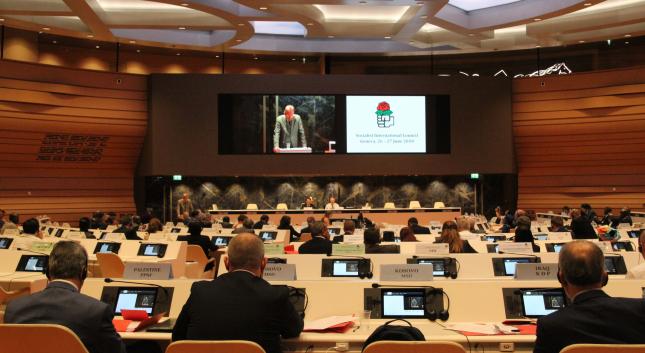 Latifa Perry
The Council of the Socialist International met at the United Nations in Geneva (UNOG) on 26-27 June 2018 in order to discuss social democratic responses to issues of the utmost global significance. The agenda included three main themes: 'The contribution of social democracy to the resolution of conflicts and to international peace and security’, ‘Overcoming challenges to democracy around the world to secure freedoms and rights for all’, and ‘Responding with our values and principles to migration globally and to the current plight of refugees’.

The Council was opened by SI Secretary General Luis Ayala, who underlined that the agenda was focused on themes that were a key priority for socialists and social democrats. He outlined that multilateralism was a core value of the SI and an indispensible tool for resolving conflicts. Social democratic values had also been central to the establishment and strengthening of democracy in many countries, and he urged action to combat the rise of populism, nationalism and authoritarianism, which was threatening the advances of previous years. He also noted that migrants were more and more demonised despite the positive role of migration in human prosperity, regretting the lack of solidarity from the richest countries on this issue.

Michael Møller, United Nations Under-Secretary-General and Director-General of the United Nations Office at Geneva, greeted all participants, saying it was a great privilege and pleasure to welcome them to the Palais des Nations. He reflected on the state of the world at a time when it was fashionable to diagnose a demise of the global order, outlining the challenge of defending and reinvigorating multilateralism. Throughout his address, the Director-General highlighted the importance and potential of the 2030 Agenda for Sustainable Development as an action plan that everyone could get behind. He considered that answers to the challenges of the day began with unity and solidarity, core values of the SI that were shared by the United Nations.

In his opening speech, the SI President George Papandreou described the sense of urgency within the movement, confronted with many injustices in societies, deep inequalities in the global economy, the growing concentration of power and wealth and facing the monstrosity of those who used fear and violence to gain power and achieve their goals. He reflected that multilateralism and cooperation were being undermined by the new US administration, making space for anti-solidarity movements and extreme nationalism. The role of social democracy was to stand up to the rise of the far right, showing that there was a different way and he called on delegates to infuse their politics with passion and imagination to this end.

The second main theme of the Council was introduced by former president of Chile Ricardo Lagos, who gave a special address on challenges to democracy. He considered in particular that current trends were pointing to a world without any global order in which it would become difficult for democracy to prevail, in particular as populism grew in strength in countries previously known for their strong democratic values. One answer proposed was to make democracy a more horizontal system and an instrument of change as a way to restore confidence in institutions. Lagos noted that these challenges were identical in the developed and developing world, and that above all, democrats everywhere needed to live up to the deeds of their ancestors and be brave.  These sentiments were echoed during further interventions on democracy made by delegates with wide-ranging experiences on the subject, from countries where democracy was well-established to those where it is almost completely absent. A declaration on overcoming challenges to democracy around the world was later adopted.

Omar Barboza, President of the Venezuelan Parliament (National Assembly), who was specially invited to the Council to address the critical situation in his country, explained how millions had left Venezuela due to a humanitarian crisis caused by corruption, repression, censorship and a lack of respect for human rights, and called for new, free presidential elections with the presence of impartial international observers. The Council echoed these calls in a resolution on Venezuela.  The Council further articulated a position on the situation with regard to democracy and human rights in specific countries, adopting a declaration on Nicaragua and a resolution on Djibouti. A special declaration of recognition for the achievements of President Ibrahim Boubacar Keita of Mali and of support as he stands for re-election in July 2018, was adopted.

Interventions on the third theme, "Responding with our values and principles to migration globally and to the current plight of refugees," included emotive and heartfelt expressions, as successive delegates underlined their support for people on the move in the world today. There was recognition among all that migration has played a vitally important historical role in the development and prosperity of humanity, and continues to be a positive phenomenon. Many speakers touched on the way that language was used to divide migrants into different categories with implicit hierarchies, such as refugee or economic migrant, immigrant or ex-pat. The Council would later adopt a declaration on global migration and the plight of refugees, underlining the fundamental and inalienable human rights of all migrants and the central and positive role of migration in human history.

A report was delivered by the chair of the Ethics Committee, Arianne Fontenelle (PS, Belgium), on the work of the committee. There were currently 41 applications for membership under examination. The Council approved the proposals of the committee to upgrade to full membership the MLPC of Central African Republic and to upgrade from observer to consultative status the Komala Party of Iranian Kurdistan. It agreed to admit the Rasanbleman party of Haiti and the Social Democratic Party of Kyrgyzstan as new full member parties; the PPSF of Palestine and the CPP of Ghana as consultative parties; and the SDPS of Serbia and MSD of Kosovo as observer members. Regarding adherence to the SI’s Ethical Charter, the Council decided that the Ethics Committee would undertake an investigation of compliance by the Fusion of Social Democrats (FSDH, Haiti), and that in the case of the member party in Benin, the chair of the Africa Committee would voluntarily suspend his activities and the next meeting of the regional committee should resolve the question of the chair.

Maurice Poler (AD, Venezuela), delivered his report as co-chair of the Finance and Administration Committee, reminding member parties of the need to meet their financial obligations to the SI, both to maintain their status and voting rights within the organisation and in order that the SI could continue to deliver a full programme of activities and meet the ambition of its members.

It was agreed that the final composition of the SI Committee on Gender Equality will be confirmed on the occasion of the annual meeting of the SI Presidium to take place at the headquarters of the United Nations in New York in September this year during the high level segment of the General Assembly.

Concluding the Council’s discussions, the SI Secretary General touched on remarks made during the sessions in reference to the SI being the legitimate organisation of the social democrats. He highlighted that the SI held its legitimacy as long as it was consistent with the values and principles that identify our movement, and as long as it was democratically self-governed and financially self-sustained by its members, guaranteeing its autonomy and integrity. The Council, he said, had offered us a route to follow and a mission to move forward our conclusions.

First Theme: ‘The contribution of social democracy to the resolution of conflicts and to international peace and security’

Second main theme: Overcoming challenges to democracy around the world to secure freedoms and rights for all

Report of the Finance Committee
Maurice Poler (Venezuela, AD) co-Chair of the Committee