SI discusses PROSPECTS FOR PEACE in the Middle East 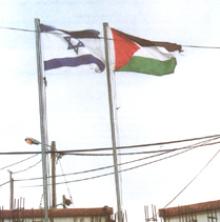 Socialist International leaders and members of the SI Middle East Committee, including the Labour Party and Meretz-Yachad of Israel and the Palestinian movement Fatah, met in Tel-Aviv and Ramallah on 29 and 30 October, to discuss the prospects for a peaceful solution to the Israeli-Palestinian conflict presented by the forthcoming Annapolis conference.

The discussions, led by Socialist International President George Papandreou and Secretary General Luis Ayala, along with the Middle East committee Co-Chair Piero Fassino and Deputy Foreign Minister of Norway Raymond Johansen as acting Co-Chair, focused on the urgent need to advance a peace process already stalled for seven years and to seize this new opportunity which has arisen to find a framework upon which to build a sustainable peace.

The session in Tel Aviv opened with the Israeli perspective, with contributions by Ehud Barak, Leader of the Labour Party and Minister of Defence and Yossi Beilin, Leader of Meretz-Yachad. Later, in Ramallah, the Palestinian perspective was introduced by the Chief Palestinian negotiator Ahmed Qurei, former Palestinian Prime Minister. Members of both the Israeli and Palestinian delegations took part in the discussions in both cities. Other contributions to the discussions by representatives from the region included those by Colette Avital MK and Ephraim Sneh MK, from the Labour Party, Abdallah Frangi and Ilan Halevi from Fatah, and Avshalom Vilan MK and Roby Nathanson from Meretz-Yachad. Palestinian Prime Minister Salam Fayyad and Al-Tayeb Abded al-Raheem, Secretary-General of the Presidency of the Palestinian Authority, also attended part of the proceedings.

Among the key questions addressed in the meeting was the immediate need for visible and tangible changes on the ground, including a ceasefire, the release of prisoners, the lifting of road blocks, access and freedom of movement, an end to arms smuggling, military build-up and militia activity, stopping the confiscation of land and the freezing of settlements. Equally, the need to address the security and humanitarian situation in Gaza and the restoration there of the legitimate institutions of the Palestinian Authority was seen as fundamental to achieving a comprehensive peace.

Tackling the core issues of the conflict — Jerusalem, refugees, borders, security, settlements, water, economic development — was stressed as urgent and crucial to both Palestinians and Israelis. Participants agreed that essential to a lasting peace was placing Jerusalem, by a mutually agreeable solution, as two capitals for two nations and that a fair, creative and realistic approach to the refugee question was needed, taking into account the national character of the Israeli state and the expectations of the Palestinian people, with the active support of the international community.

The meeting unanimously approved a statement highlighting the shared views.