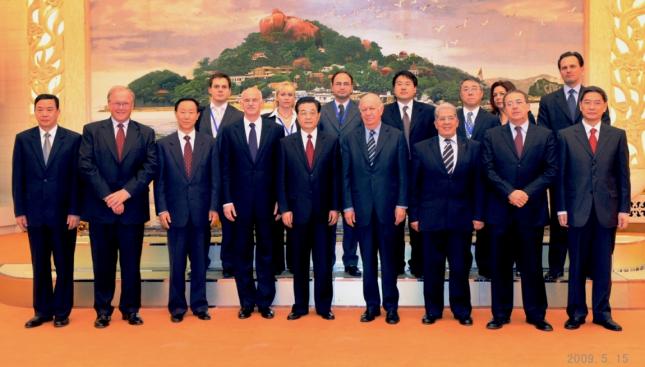 Under the heading ‘High-Level Talks on Sustainable Development’, members of the Socialist International Commission for a Sustainable World Society held discussions with the Chinese Communist Party (CPC) and leaders of the government of the People’s Republic of China in Beijing on 14-15 May, as part of the Commission’s agreed programme of work.

These discussions included on behalf of the Socialist International: SI President George Papandreou, the two Co-Chairs of the SWS Commission Ricardo Lagos and Goran Persson, SI Secretary General Luis Ayala, SWS Commission member and Minister of State of Morocco Mohamed El Yazghi, together with, from the Asian continent, the Secretary of the Mongolian People’s Revolutionary Party U. Barsbold, Parliamentary Secretary Azeem Daultana from the Pakistan People’s Party and Takuya Kawai from the Japanese Social Democratic Party.  The SI representatives met with the General Secretary of the CPC and President of the People’s Republic of China H. E. Hu Jintao on 15 May with whom substantial exchanges were held, following discussions in a working session held earlier the same day, in which participated  on behalf of the host party, Minister Wang Jiarui, Head of the International Department of the Communist Party of China (IDCPC), Vice-Minister Zhang Zhijun of the IDCPC, the Vice-Chairman of China’s National Development and Reform Commission Xie Zhenhua and the Deputy Administrator of China’s Meteorological Administration Shen Xiaonong. A day earlier, the SI representatives also held detailed talks with Vice-Premier Li Keqiang.

Climate Change – An Opportunity for Economic Growth
In the meetings between the SI leaders and the Chinese officials, the cooperation between the Socialist International and the Communist Party of China in facing the complex and deep changes of today was addressed. The crucial issues of climate change and sustainability were  shared concerns and the need to bring positive change on these issues, as well as on other related matters such as the financial crisis or disarmament, was underlined.  Progress made by the Chinese government in the field of environmental protection and ecological conservation, including a 10% contribution to global wind power made by China in 2008, reductions in emissions of Sulphur Dioxide (SO2) and levels of air pollution in Beijing, was pointed out, as was the Chinese government’s commitment to sustainability as part of their national policy.  Participants in the talks agreed that climate change was an opportunity for economic growth more than simply a problem to be eradicated, a driving force for modernisation with the potential to benefit the developing world as much as the developed.

Sustainability – A Model of Development
In the working session on sustainability, SI President George Papandreou underlined the need for a new framework and for a new model of development to manage common wealth in a way that was sustainable for the planet. Commission Co-Chair Ricardo Lagos addressed the responsibility of all countries on mitigation in order to lower global emissions per capita, pointing out that further initiatives would be needed to help developing countries in their fight against poverty so that their emissions could be lowered too. C0-Chair Goran Persson spoke of the prospects for carbon capture technology, noting it could act as a bridge to the future between current and new technologies. Both reiterated the commitment to reforestation programmes. Eleven ‘Crossroads’ questions central to the Commission’s draft report currently in elaboration were introduced by SI Secretary General Luis Ayala for discussion. Vice-Minister Zhang Zijun presented the views of his party on the issues raised, while Commission Member Mohamed El Yazghi of Morocco drew parallels between the situation in Africa and Asia, arguing for a return to a ‘culture of harmony’ over a model where only economic growth is key.

Asian Perspectives on Climate Change
Within the framework of these talks, Asian perspectives on the issue of climate change were also highlighted. MPRP Secretary U. Barsbold of Mongolia discussed the effect of global warming on mountainous countries, how nations such as his were affected relative to Oceanic countries and the effect the phenomenon had on economic and social development in such areas. Azeem Daultana from the Pakistan People’s Party raised the issue of what higher temperatures would mean for low-level nations in the region, drawing attention to drought and desertification caused by climate change. Takuya Kawai from the SDP Japan highlighted the need to protect water resources and recycling systems, also recalling his party’s position on nuclear issues and its role in calling for an Environment Ministry in that country.

Other Activities in Connection with the Talks
Prior to the meetings, participants visited BBMG (Jinyu Group), a state-run enterprise part of Beijing’s municipal government specialising in cement production that uses a low-carbon economic model in resources deployment and waste disposal. A leading provider of building materials in the world, it disposes of 60 million tonnes of waste per year and has piloted a notable recycling scheme. It has also played an important role in creating green housing in China, having first introduced codified insulating materials over 40 years ago and today working to refit houses damaged in the recent earthquake in Sichuan province to meet higher environmental standards. This visit was followed by a tour and discussions at Tsinghua University, China’s top academic institution and one which roots its teaching and maintenance in green values. Delegates to the High-Level Talks were briefed on the University’s extensive environmental research programmes, including work on hydroelectricity and carbon capture, in addition to being shown how the institution operated on the basis of low-carbon technology.  As part of the programme, a visit was also made to an Eco-City Project in the port city of Tianjin, where city officials explained the advances made in terms of air quality, environmental protection and GDP growth in an ecological framework.

Future Work
In line with its agreed programme of activities for 2009, participants at the discussions looked ahead to the remaining work of the Commission before the conclusion of its remit. Making progress on its report to be presented in September 2009 at the United Nations in New York on the occasion of the opening of the General Assembly, the members of the Commission reiterated the need for a sustainable world society beyond the commitments to be reached in Copenhagen in December this year, one that supported a long term future of equitable and ecological development and growth.