CIS, Caucasus and the Black Sea

Committee meeting in Chişinău: strengthening the economy, securing democracy and resolving conflicts in the region 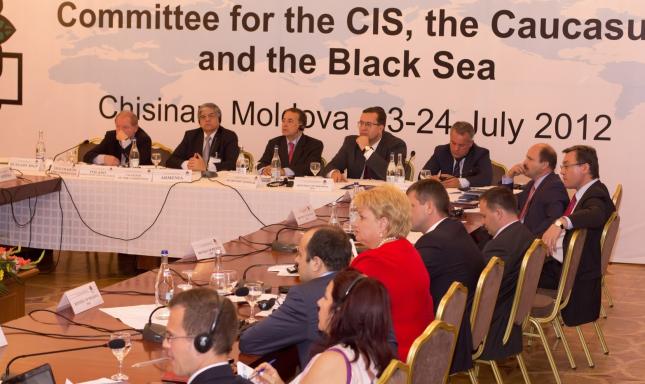 Participants were warmly welcomed to Chişinău by Marian Lupu, chair of the PDM and speaker of the Moldovan parliament. Lupu expressed the great satisfaction felt by his party at hosting such a meeting of social democrats from the region, where reports, ideas and initiatives could be exchanged. He highlighted the progress that had been made on the issue of democracy in the Republic of Moldova, and the vision of the PDM for a sustainable future for the country based on social democratic values. Other perspectives from the PDM were also added to the discussions by ministers and members of the party leadership in their interventions. (list of participants)

The holding of the last meeting of the committee before the XXIV Congress in Moldova was symbolic of the progress and advance of social democracy in the region. In his opening remarks, Luis Ayala, Secretary General of the SI recalled that in 2009, at the first meeting of the committee after the XXIII Congress, great concern had been expressed over the fate of democracy in Moldova, with a strong call made for new elections. Political developments over the intervening period had shown that the struggle for democracy in the region could be won, bringing people together to remove obstacles and divisions.

Discussions over the course of the two-day meeting were chaired by Mario Nalpatian (Armenia, ARF-D) and Alexandra Dobolyi (Hungary, MSzP), the co-chairs of the committee. During exchanges on the economic outlook for the region, there was a consensus that the global nature of the financial crisis and interdependence of world economies meant that the countries of the region were all subject to external factors. A common challenge for countries of the region was to increase salaries as a proportion of GDP, which remain low and are a contributing factor to inequality and slow economic development. In addition to these universal concerns, delegates reported on the more specific challenges facing their countries in relation to the economy, which included the problems presented by emigration and a dependence on remittances in countries with large diasporas. Economic prospects are also closely linked to the political situation, with authoritarianism and corruption depriving citizens of opportunity and prosperity and wealth concentrated in the hands of a powerful elite.

The democratic challenge is a crucial struggle, and exchanges on the second main theme focused on the democratic deficit that continues to exist in a majority of countries of the region. In Belarus, the Socialist International has consistently made calls for the release of Mikalai Statkevich and all other political prisoners, many of whom were incarcerated following the rigged presidential election of 2010 for nothing more than their opposition to the authoritarian regime. Concerns were also raised about the deepening restrictions on democratic freedoms in Ukraine. Both there and in Georgia, elections scheduled for the autumn will be a test of the democratic credentials of their respective political processes. Participants noted that in Kazakhstan and Russian Federation, recent elections had failed to live up to expectations, and much work remained to be done across the region to ensure the pre-eminence of true democracy.

Exchanges on the resolution of regional disputes covered the unresolved conflicts in Transnistria, Nagorno-Karabakh, South Ossetia and Abkhazia, reflecting that the way forward to solve these questions was through dialogue and negotiation. Accordingly, the work of the government of Moldova and PDM towards dialogue to settle outstanding issues in relation to Transnistria was recognised. With regard to other regional disputes, representatives attending the committee from Armenia, Russian Federation and Georgia expressed the positions of their parties on the situations that continue to affect the security of their countries and reported on the latest developments. The role that social democracy could play in conflict resolution was stressed, with an important example the ability of the SI to bring about political dialogue between Armenia and Azerbaijan. Progress would be helped with the strengthening of social democratic parties in the countries involved in conflicts, and the entry of those parties into government, as seen in Moldova.

At the conclusion of the meeting, a declaration was adopted based on the discussions over the two days, which highlighted the key concerns of those present on the central questions in relation to the economy, democracy and conflict resolution. The declaration also assessed the positive work of the committee in the period since the last Congress. The Committee for the CIS, the Caucasus and the Black Sea has been instrumental in developing relationships between our global movement and social democratic parties in the region, discussing common policy objectives and sharing strategies for the advancement of shared causes.