Committee for the CIS, the Caucasus and the Black Sea

Ukrainian conflict at the centre of discussions in Astana 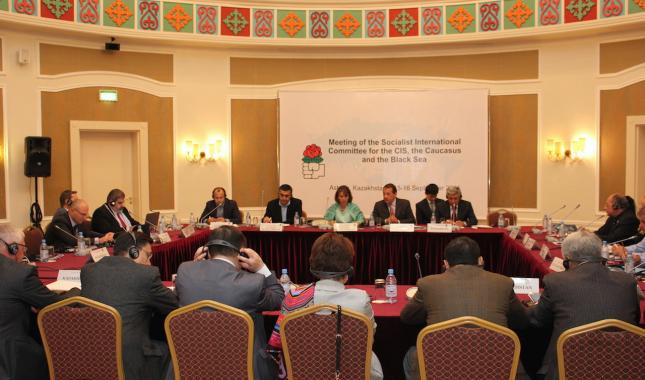 The Socialist International Committee for the CIS, the Caucasus and the Black Sea met on 15-16 September 2014 in Astana, Kazakhstan, hosted by its member party in that country, the Nationwide Social Democratic Party (OSDP). The agenda of the meeting consisted of three main themes: overcoming conflicts and securing peace in the region: the social democratic contribution; the role of our movement in advancing democracy and its institutions in the CIS, Caucasus and Black Sea region; and achieving openness, inclusiveness and solidarity in countries of the region – a cornerstone of the social democratic agenda.

A warm welcome was extended to participants by Zharmakhan Tuyakbai, chair of the OSDP, who noted that this was the second time the committee had gathered in his country, following on from the meeting in Almaty in 2011. Astana, he remarked, was a prosperous city, but this prosperity had not yet spread to citizens in the rest of the country. The OSDP was working for justice and democracy in Kazakhstan. Reflecting on the agenda of the meeting, he expressed his hope that the committee could find mutual understanding, in line with the fundamental objective of the SI to minimise conflict and suffering, and its tradition of open, fraternal discussions and consensus-based agreements.

The Secretary General of the Socialist International, Luis Ayala, emphasised the importance of the discussions that the committee would hold over the two days of its meeting. Recent months had seen increased conflict in the world, and as a democratic organisation we needed to approach these conflicts on the basis of the experience and views of our member parties in the different regions of the world. He stressed the social democratic commitment to peace as a prerequisite for well-being and progress, and the need for political rather than military solutions to ongoing conflicts. He also expressed gratitude to the host party for their fraternal welcome and preparations for the meeting, wishes which were echoed by all participants.

Discussions on the theme of overcoming conflicts centred on recent events in Ukraine, particularly in the eastern regions of that country.

Dismay was expressed at the return to an era of hot wars with high numbers of casualties, describing the struggle for social justice of Maidan that had mutated into an external conflict. There was a need for respect for the territory of Ukraine, and the Ukrainian representative highlighted that there was a great willingness among the people to defend their land. The search for peace was fundamental, in conjunction with respect for human rights and national borders. Doubts were expressed over the effectiveness of the fragile ceasefire in the country and whether it would merely be a pause before the resumption of violence.

Delegates from the SI member party in Russia underlined the tragedy of people that have lived side by side taking up arms against each other. They called for an end to bombing in civilian areas and cities and the establishment of provisions for humanitarian aid to reach the affected regions. They highlighted the grievances of many citizens living in the affected areas of Donetsk and Lugansk towards the Kiev government, and considered out of place recent statements and plans by leaders of NATO countries in relation to the conflict. In line with the social democratic principles of the SI, they were committed and looking forward to a peaceful resolution to the crisis.

Further interventions highlighted that in situations such as the conflict in Ukraine, it was difficult to distinguish between fact and propaganda. Despite differences in their interpretations of the fighting and actors involved, both the Ukrainian and Russian delegations, along with the entirety of those present, agreed that for the Socialist International the first priority must be to promote peace and an end to the loss of civilian life. The citizens of Ukraine are the ones that have suffered, having firstly been failed by successive governments and lately enduring the consequences of the conflict that have been felt by people across the country, but particularly in the affected regions. Members of delegations from other countries present brought their own experiences to the discussions, and were agreed that in the effort to find common ground including in a meeting such as this between colleagues, the SI had its role to play in taking a fresh approach to the crisis independent from the actors involved in the conflict, both internal and external, with the principles of our organisation at the forefront.

Following comprehensive discussions, conducted in a spirit of honesty and openness but also of mutual respect and fraternalism, the viewpoints of all those present were taken into account in a declaration on the conflict in Ukraine adopted by the committee at the close of the meeting, outlining its position in favour of the peaceful resolution of this conflict and proposals resulting from the agreements reached by participants.

Reports presented by delegates on the national situation in their respective countries related strongly to the agenda themes of democracy and solidarity. With regard to the host country, this primarily concerned the search for space for an effective social-democratic political force in Kazakhstan. It was felt therefore, by the members of the committee, that it was important that the party participate in the SI and its activities as a reflection of the commitment of Kazaks to the values and principles of the International.

With regard to the SI member party in Russia, it had enjoyed some electoral success, while it continued to work to strengthen the democratic process to overcome reported shortcomings.

In Armenia, there has been a mobilisation of civil society and youth groups, but that has not manifested itself in a party political way. Within the parliament, the SI member ARF-D was seeking cooperation with other opposition groups on issues of common concern.

In Azerbaijan, the party had re-established its relations with the Socialist International, in accordance with the decisions of the last Council, and was playing once more an active role in the work of the Committee, a fact that had been reflected in public opinion in the country.

The committee heard that growing authoritarianism was regrettably a feature of political life in Tajikistan, where the opposition has no leaders due to the systematic removal of official and unofficial opposition parties, under the pretence that it is fighting terrorism. Amendments to the constitution in 1999 and 2003 reduced democratic space in the country, and a state of total authoritarianism was now in existence.

Before closing, an overview of the discussions was made, pointing to the different experiences and examples with regard to the struggles of social democrats around the world to advance and consolidate political democracy, economic development with fairness, and social change. These objectives remained the fundamental commitments of the member parties of the International in the CIS, the Caucasus and the Black Sea region.