The Socialist International at the 132nd IPU Assembly in Hanoi 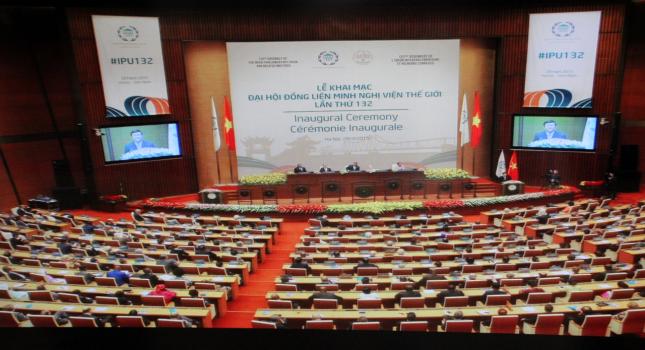 On the occasion of the 132nd Assembly of the Inter-Parliamentary Union (IPU) held in Hanoi from 28 March to 1 April 2015, the Socialist International organised a meeting, as it has at previous IPU Assemblies, of parliamentarians from SI member parties. The discussions included an overview of current international developments of common concern, reports from members on issues of interest to their national delegation and an exchange of views on the main themes of the IPU agenda.

The threat of terrorism, which was the emergency item of the 132nd IPU Assembly, was addressed by participants who reported on current developments in their regions and efforts underway to confront it. Particular attention was drawn to the unstable political situation in Libya as a haven for the flow of arms and drug trafficking, constituting a serious security threat to its neighbours. Recent terrorist activity, such as that in Nigeria and Tunisia, were referred to and the resolve to overcome this scourge collectively through increased international cooperation was emphasised. For the Socialist International, it was underlined, this subject has consistently been central to its discussions both at regional and global level, it was addressed most recently at the SI Council meeting held last December, as equally it would continue to be high on the agenda of forthcoming regional meetings of the SI.

The situation in the Middle East was subject of debate, in particular the situation of Palestine following the recent elections in Israel and the negative statements made by B. Netanyahu during the closing days of the campaign, which did not augur well for future negotiations leading to the much hoped for and long awaited two-state solution, in the interest of peace and progress. The Palestinian participants also reported on the situation regarding their application to join the International Criminal Court. The Chair of the IPU’s Committee on Middle East Issues, Lord Judd from the United Kingdom, contributed to the discussions, updating participants on his committee’s work. The task of peace-building required unlimited patience and determination to persevere, and it was stressed that the importance of democratic socialism was more relevant and crucial than ever to build understanding and commitment among people.

As regards increasing recognition internationally of the state of Palestine, the representatives from Belgium reported on their attempts while in government to this end, efforts which are now stalled due to the change of government in Brussels, but every opportunity was being made to raise this issue. It was recalled that the SI Council at its last meeting had called on all SI member parties to work towards international recognition of the Palestinian state.

The meeting provided participants with an opportunity to share information on their national situations. The gathering heard of latest developments in Mongolia, where the SI-member MPP had joined in a governing coalition. Elections were due in Mongolia next year, and the party would be contesting with a reinforced social democratic agenda.

In Spain the Socialists had recently won an important victory in Andalucia at a time when Europe was facing complex social and economic problems and rising populism from both left and right. The meeting heard of the work and efforts by the Socialist Party and the preparations underway to face the forthcoming local and regional elections due in May.

Regarding Haiti there existed a serious impasse following the end of the last parliament’s mandate and no agreement had been reached for moving forward with elections. It was reported that the existing President remained in office despite the absence of a parliament. It was hoped that free and fair parliamentary elections would take place in September, followed by presidential elections in October for which there were numerous registered candidates. The importance of support for the efforts to achieve true democracy in Haiti was underlined, as it was for a fair solution to the situation of vulnerability affecting citizens of Haitian origin living abroad.

The representatives from the SI-member ruling party in Zambia, the Patriotic Front, reported on the recent elections that had taken place in December following the passing away of the late President Sata. These elections had taken place peacefully and democratically. The country now looked forward to hosting the 134th IPU Assembly in Lusaka in 2016, for which preparations were underway.

In his summing up, the SI Secretary General, who chaired the meeting, made reference to recent and forthcoming activities of the organisation, and recalled the decisions of the last SI Council in regard to terrorism. It was imperative to also focus on Democracy, as it was essential to remove sources of conflict including the deficit of rights and freedoms. It was important, he underlined, that in the face of the many challenges ahead for our movement, the values and principles we represent as social democrats should not be compromised, they should be strengthened through the coherence of our policies and the preservation of our identity as a movement of the left.
______________